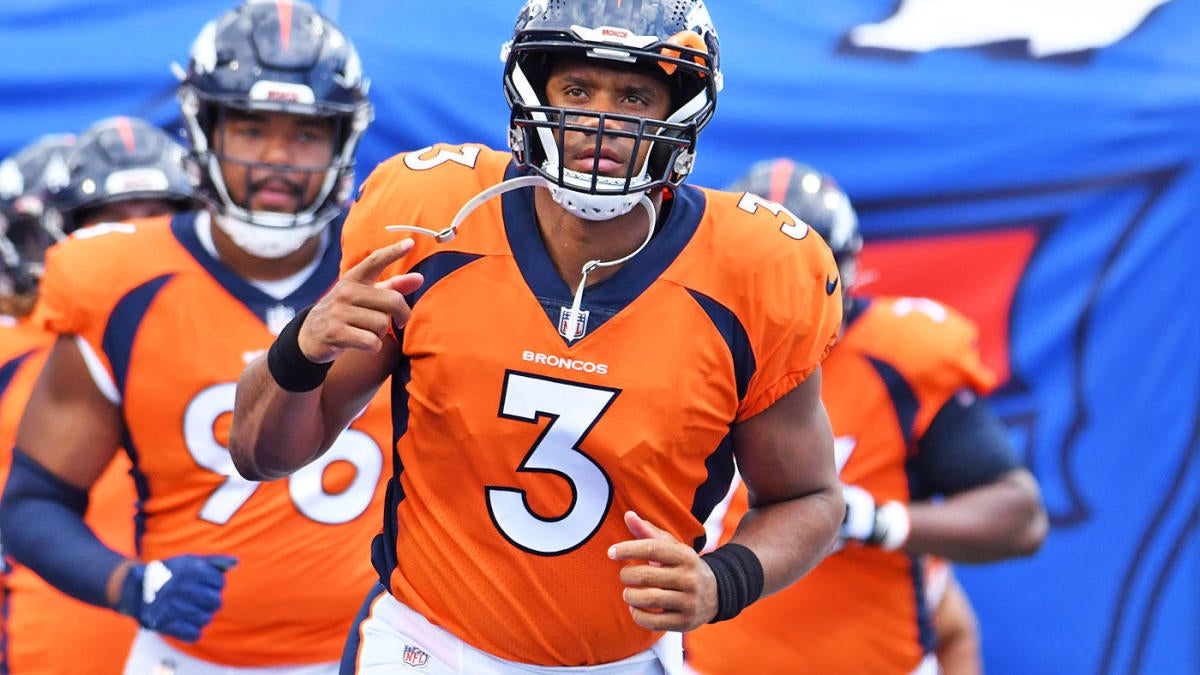 There were a significant amount of Fantasy drafts held over the past two days during the final weekend in August, which also coincided with the end of preseason games. It’s a great time to study the Average Draft Position data heading into the final stretch of the draft season.

While we still have several things to monitor this week when it comes to health, NFL roster moves and depth charts, most Fantasy managers know what to expect for the upcoming season. And that’s been reflected in recent drafts.

I’ll give you my favorite and least favorite values ​​at each position based on the CBS Sports ADP (insert link here), and hopefully it will help find some players to target — and others to avoid — for those of you still drafting before the regular season starts on Sept. 8.

Thanks for signing up!

Keep an eye on your inbox.

There was an error processing your subscription.

My ranking for these quarterbacks is Wilson (QB8), Lance (QB9), Prescott (QB10), Cousins ​​(QB13) and Carr (QB14), and I would love to have any of them as my starting Fantasy option this year. I would draft all of these guys ahead of Aaron Rodgers, who is QB9 based on his ADP. … Wilson is the safest of the group and has tremendous upside as the starter in Denver, and Lance could be a league winner as a top-five quarterback for the 49ers. Lance also could flop given his inexperience, and he’s the only quarterback I have ranked in the top 10 who should be drafted with a backup option. … I love pairing Lance with Cousins ​​or Carr, and both of them are two of my favorite sleepers this season given their value and upside. Cousins ​​benefits with new coach Kevin O’Connell, and Carr should have a career season with Davante Adams now in Las Vegas. … I expected Prescott’s value to dip with the injury to left tackle Tyron Smith (hamstring), but I still like Prescott as a No. 1 fantasy quarterback this year. If he continues to slide, you should take advantage of it.

We’ve been over this many times with Burrow based on his inflated ADP, which varies on different websites. He’s been as high as QB4 this offseason, and I can’t draft him at that price. His ADP on CBS is closer to his value, but I wouldn’t draft him ahead of Wilson or even Lance if you’re chasing upside. Burrow is a solid starting Fantasy quarterback this year, but don’t reach for him. … The same goes for Rodgers, who lost his two top receivers in Adams and Marquez Valdes-Scantling. While the latter is replaceable, we’ll see how Rodgers does without Adams for a full season. I still like him as a Fantasy starter, but I would rather settle for Rodgers than target him on Draft Day. He’s outside of my top 10 this year. … Stafford seems clear of the elbow injury that scared Fantasy managers — and likely the Rams — at the start of the training camp. It’s still something to monitor and could be a concern again during the season, which is why Stafford is lower in my rankings (QB12) compared to his ADP. Like Burrow and Rodgers, I would be happy with Stafford as my starting quarterback this season, but I’m not reaching for him at this price.

Swift might have been overvalued when he was being drafted as a first-round pick at the start of training camp, but he should be selected closer to Round 1 than Round 3. … Etienne is a borderline top-15 running back in PPR , and I would draft him in early Round 4. I’m not worried about him losing value in PPR when James Robinson (Achilles) is 100 percent. … I’m buying Pierce as a breakout candidate, and I like him as a top-24 running back in all formats. He’s worth drafting in Round 6. … At the time of publication, we don’t know the status of Brian Robinson, who was shot multiple times in an attempted robbery Sunday. Clearly we hope Robinson is OK, but any absence would be a boost for Gibson, who was on the verge of losing his job to Robinson heading into Week 1. … Edmonds should be the best running back in Miami this year and is worth drafting as early as Round 5 in PPR. … Stevenson should benefit in a big way if Ty Montgomery (ankle) is out for an extended period of time. If Stevenson plays on passing downs, as well as splitting work with Damien Harris on the ground, then he’s a borderline starter in all leagues. … Henderson will see a rise in ADP if Cam Akers (soft-tissue injury) remains out in practice this week. Henderson could be the Rams starter in Week 1. … Hines has been one of my favorite draft targets this year, and I like him as a flex play in PPR. He could also be a lottery ticket if something happens to Jonathan Taylor. … Pacheco and White are two lottery tickets to target in all leagues. If Pacheco gets a chance to start for the Chiefs or White for the Raiders then both would be potential starters in all formats.

I’m not running away from Chubb even with Jacoby Brissett starting the first 11 games for the Browns with Deshaun Watson (suspension) out. But I’m not drafting Chubb as a top-10 running back in Round 2, especially in PPR. … Elliott could be in trouble with Tyron Smith out for the Cowboys, and I was already leery of drafting Elliott in Round 3 in all leagues. I’d rather draft Tony Pollard as RB31 at his ADP of 83.1. … Jacobs is expected to share touches with Zamir White and Ameer Abdullah, and it’s hard to trust Jacobs as a must-start option in PPR. I’m definitely not drafting him in Round 4 at this price. … Akers is hurt and seemingly headed for a committee with Henderson and potentially rookie Kyren Williams. It’s not worth it to draft Akers in Round 4 with his status uncertain for Week 1. … Harris could benefit with Montgomery out, but that doesn’t mean you should draft him as a starter in all leagues. I’d rather have Stevenson over Harris in PPR, and I’m not drafting Harris in Round 5.

Thanks for signing up!

Keep an eye on your inbox.

There was an error processing your subscription.

Pittman and Moore are two of my favorite breakout candidates this year, and I would draft both in Round 2. This is amazing value to get both in Round 4 if this remains their ADP in the majority of leagues. … Sutton is another breakout candidate worth drafting in Round 3 in PPR. I like Jerry Jeudy (ADP 72.4, WR28) as well, but Sutton has more upside as the likely No. 1 receiver for Russell Wilson. … Thomas (hamstring) will hopefully be healthy for Week 1, but he’s a steal at this price. He had a great training camp by all accounts in his comeback from his ankle woes the past two seasons, and he can return as a top-15 Fantasy receiver again this year. … Cooks is always undervalued, but I thought that would change this season given how he played for them Texans last year Apparently not, so buy him all day at this price, which is a steal. … Bateman, Mooney and Kirk should be the No. 1 receivers for the respective teams. Bateman has to share targets with Mark Andrews, but Lamar Jackson should still lean on Bateman enough (figure about 120 targets) to where he can be a borderline starter in all leagues. Mooney should be top 10 in targets this season among all receivers, and Kirk should be the leading receiver for the Jaguars. I would draft Kirk as early as Round 7 in all formats. … Collins has done well this preseason and should be No. 2 in targets for the Texans behind Cook. He’s one of my favorite sleepers. … Palmer should be drafted with a late-round pick in all leagues. I love him and KJ Osborn (ADP 147.8, WR55) as lottery-ticket receivers who would benefit in a major way should someone get hurt in front of them on the depth chart.

Samuel is a quality Fantasy option and worth drafting in late round 2 or early Round 3, but I don’t love him as the No. 6 receivers off the board, especially in PPR. … Evans could struggle for targets in Tampa Bay when everyone is healthy now that Russell Gage and Julio Jones have joined the Buccaneers, along with Chris Godwin (ACL) being on track for Week 1. I don’t mind drafting Evans in early Round 3 in PPR, but I’m not sure he should be considered a top-10 Fantasy receiver. Godwin (ADP 60.8, WR20) is the better value by far. … Waddle is dealing with an undisclosed leg injury following the end of preseason action, and hopefully he’s ready for Week 1. I don’t mind drafting him in Round 5 in all leagues, but I don’t consider him a top- 20 Fantasy receiver now that Tyreek Hill is in Miami. … Metcalf will have to contend with Geno Smith as the starting quarterback for Seattle, at least early in the season. That lowers Metcalf’s value, and I don’t want to draft him as a starter in PPR. I’m also worried about Tyler Lockett (ADP 118.16, WR44), but he’s being drafted much later. … I like Thielen as a No. 3 receiver, but he’s being drafted as a starter here, which feels risky given his injury history and the expected increased roles for Osborn and Irv Smith. The saving grace for Thielen, especially in non-PPR leagues, is that he could score eight-plus touchdowns if he stays healthy.

I’m not sure if Goedert should be drafted higher than TE7, but he might be the best value at the position among the top-tier options. He’s headed for a breakout campaign this year. … Kmet is another amazing value given his upside, and he’s another one of my favorite breakout players this season. He should soak up targets from Justin Fields in Chicago’s offense as the No. 2 options in the passing game behind Mooney. … Njoku should benefit with Brissett under center with a lot of short-area passes. And he’s going to be No. 2 in targets for the Browns behind Amari Cooper, which is something we like for a tight end.

I’m not panicking about Kittle like some of my colleagues, but I’m also not drafting him in Round 4 or as the No. 4 tight ends. That’s too soon. … Knox has the potential to lead all tight ends in touchdowns, but I’m not drafting him at this price, especially in PPR. There are too many mouths to feed in Buffalo. … Gesicki needs a trade out of Miami to come close to living up to this ADP. He does not appear to be a major factor in the Dolphins offense heading into the season.