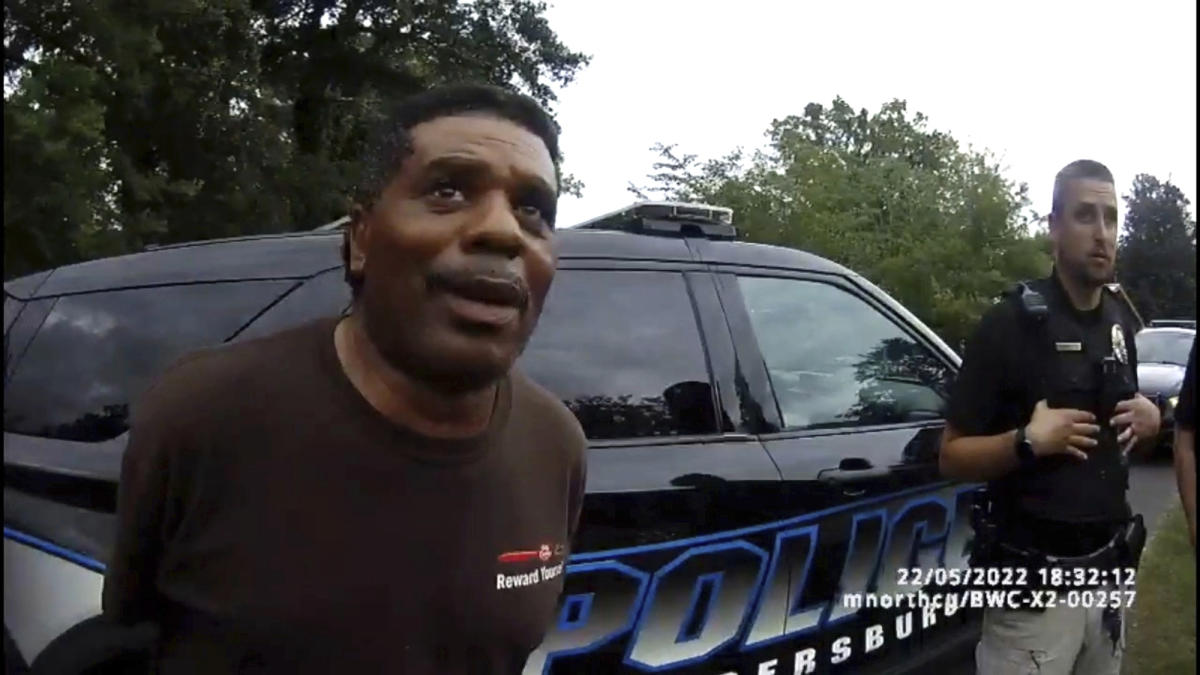 CHILDERSBURG, Ala. (AP) — Michael Jennings wasn’t breaking any laws or doing anything that was obviously suspicious; the Black minister was simply watering the flowers of a neighbor who was out of town.

Yet there was a problem: Around the corner, Amber Roberson, who is white, thought she was helping that same neighbor when she saw a vehicle she didn’t recognize at the house and called the police.

Within minutes, Jennings was in handcuffs, Roberson was apologizing for calling 911 and three officers were talking among themselves about how everything might have been different.

Harry Daniels, an attorney representing Jennings, said he plans to submit a claim to the city of Childersburg seeking damages and then file a lawsuit. “This should be a learned lesson and a training tool for law enforcement about what not to do,” he said.

A 20-minute video of the episode recorded on one of the officers’ body cameras shows how quickly an uneventful evening on a quiet residential street devolved into yet another potentially explosive situation involving a Black man and white law enforcement authorities.

“Whatcha doing here, man?” Officer Chris Smith asked as he walked up to Jennings, who held a hose with a stream of water falling on plants beside the driveway outside a small, white house.

“Watering flowers,” Jennings replied from a few feet away. Lawn decorations stood around a mailbox; fresh mulch covered the beds. It was more than an hour before sunset on a Sunday in late May, the kind of spring evening when people are often out tending plants.

Smith told Jennings that a caller said she saw a strange vehicle and a person who “wasn’t supposed to be here” at the house. Jennings told him the SUV he was talking about belonged to the neighbor who lives there.

“I’m supposed to be here,” he added. “I’m Pastor Jennings. I live across the street.”

“Oh, well. Man, I’m not going to give you ID,” Jennings said, turning away.

“I didn’t do anything wrong,” the pastor replied.

Jennings, 56, was born in rural Alabama just three years after George C. Wallace pledged “segregation forever” at the first of his four inaugurations as governor. His parents grew up during a time when racial segregation was the law and Black people were expected to act with deference to white people in the South.

“I know the backdrop,” Jennings said in an interview with The Associated Press.

Meanwhile, the officers who confronted him on May 22 work for a majority-white town of about 4,700 people that’s located 55 miles (88 kilometers) southeast of Birmingham down US 280. White people control city hall and the police department.

Jennings went into the ministry not long after graduating from high school and hasn’t strayed far from his birthplace of nearby Sylacauga, where he leads Vision of Abundant Life Ministries, a small, nondenominational church, when not doing landscaping work or selling items online. In 1991, he said, he worked security and then trained to be a police officer in a nearby town but left before taking the job full time.

Alabama law allows the police to ask for the name of someone in a public place when there is reasonable suspicion that the person has committed or is about to commit a crime. But that doesn’t mean a man innocently watering flowers at a neighbor’s home must provide identification when asked by an officer, according to Hank Sherrod, a civil rights lawyer who reviewed the full police video at the request of the AP.

“This is an area of ​​the law that is pretty clear,” said Sherrod, who has handled similar cases in north Alabama, where he practices.

Cuffed and seated between two shrubs on the front stoop of his neighbor’s home, Jennings told Smith and Gable how his son, a university athletics administrator, had been wrongly “arrested and profiled” in Michigan after a young woman at a cheerleading competition said a Black man had hugged her.

Jennings said he felt “anger and fear” during his interaction with the Alabama police officers not only because of what happened to his son but due to the accumulated weight of past police killings — George Floyd, Breonna Taylor and others — plus lower-profile incidents and shootings in Alabama.

Jennings was already in the back of a patrol car by the time Roberson, the white woman who called the police, emerged. Jennings, she told officers, was a neighbor and a friend of the home’s owner, Roy Milam.

“Okay. Does he have permission here to be watering flowers?” Smith asked.

“They can, because they are friends,” she replied. “They went out of town today. He may be watering their flowers. It would be completely normal.”

Milam told the AP that was exactly what happened: He’d asked Jennings to water his wife’s flowers while they were camping in the Tennessee mountains for a few days.

A few moments later, officers told Roberson that a license plate check showed the gold sport-utility vehicle that prompted her call in the first place belonged to Milam. They got Jennings out of the patrol car and he told them his first and last name.

“I didn’t know it was him,” Roberson told police. “I’m sorry about that.”

The officers spent much of their remaining time on the scene in a discussion that began with a question from Smith: “What are we going to do with him?”

After weighing different options, they settled on a charge of obstructing governmental operations that was thrown out within days in city court. The police chief who sought the dismissal after reviewing the 911 call and bodycam video, Richard McClelland, resigned earlier this month. City officials haven’t said why he quit, but city attorney Reagan Rumsey said it had nothing to do with what happened to Jennings.

Michael Jennings is still friends with Milam, the neighbor with the flowers. Milam, who is white, said he feels bad about what happened, and the two men will continue watching out for each other’s homes, just as they’ve done for years.

“He is a good neighbor, definitely. No doubt about it,” Milam said.

Jennings also recently spoke with Roberson for the first time since the arrest.

The pastor, who lives less than a third of a mile from the police station, said he has not seen any of the three officers who were involved in his arrest since that day. He believes all three should be fired or at least disciplined.

“I feel a little paranoid,” he said.

Nevertheless, he still waves at police cars passing through his neighborhood, partly out of the Christian call to be kind to others.

“You’re supposed to love your neighbor, no matter what,” he said. “But you’ve heard the saying, ‘Keep your enemies close to you, too.’”

Reeves is a member of AP’s Race and Ethnicity Team.