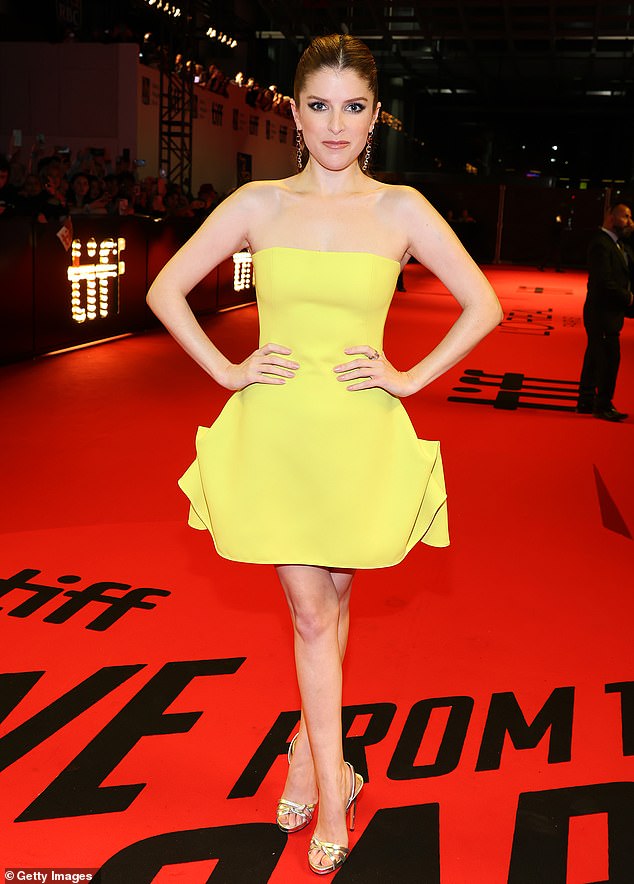 Anna Kendrick donned an eye-catching dress as she walked the red carpet to celebrate the premiere of her latest film titled Alice, Darling on Sunday.

The talented actress, 37, wore a yellow gown and appeared to be in good spirits as she took part in the Toronto International Film Festival.

The star recently opened up about her surprising experience of getting trapped in an elevator before the big premiere, joking that People‘I got in the wrong elevator at the wrong time.’

Beautiful: Anna Kendrick, 37, was seen walking the red carpet at the screening of Alice, Darling during the Toronto International Film Festival earlier on Sunday

The Pitch Perfect actress slipped into a vibrant, yellow strapless mini dress that stopped just above her knees.

The dress showed off her slim waist and fit physique as she posed for photos on the star-studded red carpet at the film festival.

Anna slipped into a pair of gold, open-toed strappy heels to coincide with the color scheme of her ensemble. 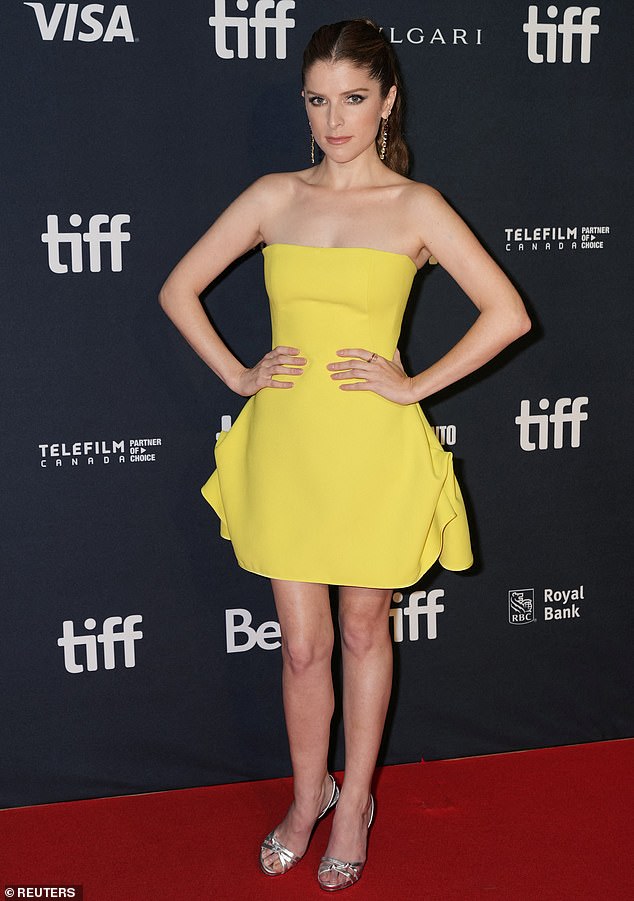 Stunning: The Pitch Perfect actress looked on the bright side by donning a yellow dress for the premiere of her latest thriller 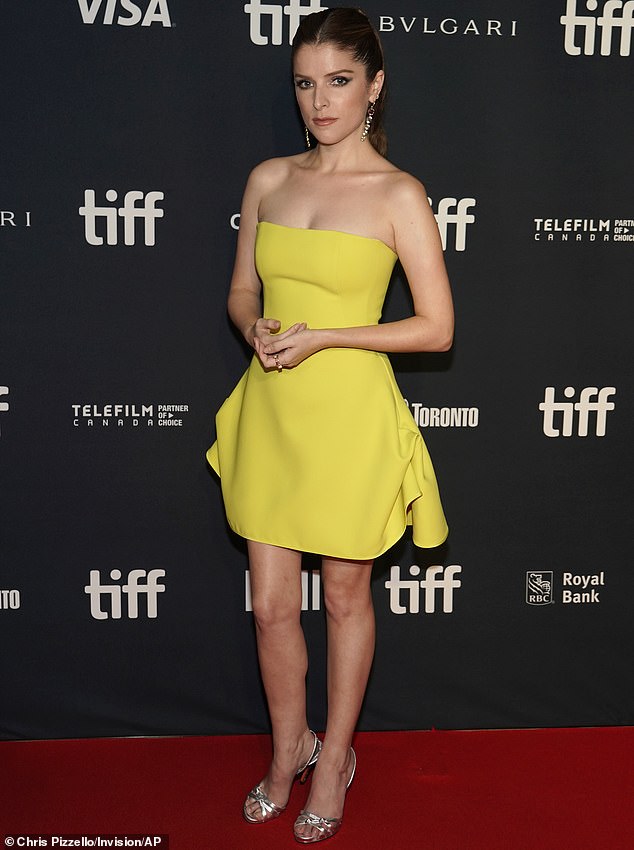 Adventurous day: The Twilight alum got trapped in an elevator earlier on Sunday before the premiere

To accessorize her look, the Twilight alum added a pair of gold-colored, dangly earrings that almost brushed her shoulders and a gold ring.

In order to keep the yellow dress the main focal point, Anna opted not to add any other pieces of jewelry.

Her brunette hair was parted in the middle, and pulled back into a sleek, stylish ponytail.

Her makeup was elegantly done, which consisted of black eyeliner and eyeshadow, along with a nude-colored lipstick.

The beauty appeared to be thrilled to take part in the special screening of her latest film called Alice, Darling. The thriller was directed by English filmmaker, Mary Nighy. 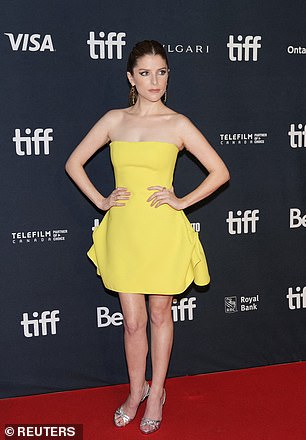 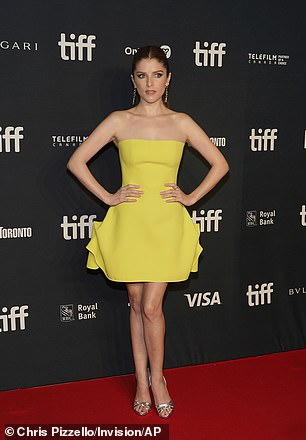 New project: The beauty plays the lead character in her latest film called Alice, Darling and was directed by Mary Nighy 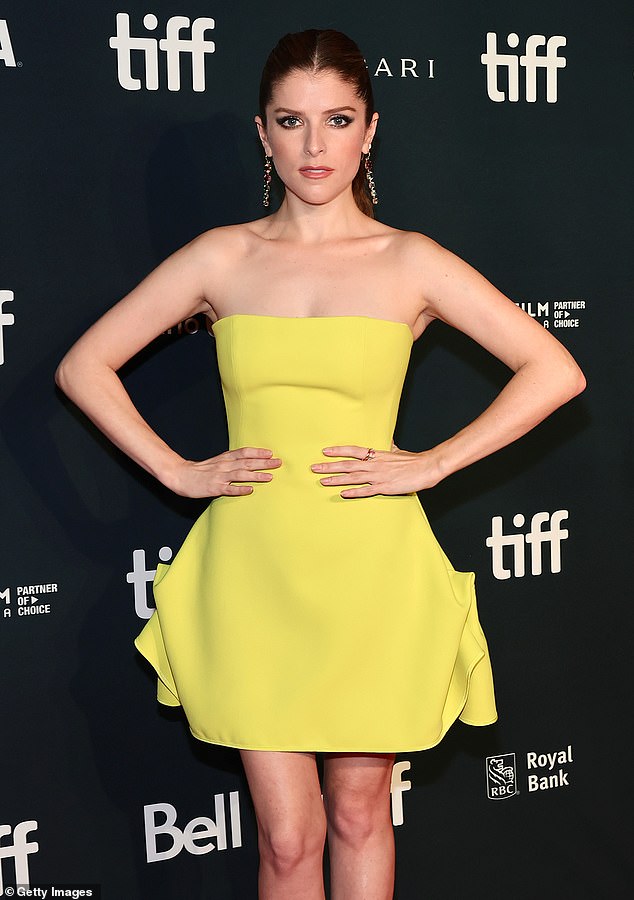 Meaningful project: Anna explained to People that she took on the role of Alice because, ”I was coming out of a personal experience with emotional abuse and psychological abuse”

According to the movie’s official synopsis IMDBAnna plays the character of Alice, who is ‘trapped in an abusive relationship’ and ‘becomes the unwitting participant in an intervention staged by her two closest friends.’

Other stars in the thriller include Charlie Carrick, who plays her boyfriend, Simon, in the film, and Kaniehtiio Horn along with Wunmi Mosaku.

When discussing the film that People recently, Anna explained what prompted her to take on the role of Alice.

“I was coming out of a personal experience with emotional abuse and psychological abuse,” she told the publication. ‘I think my rep sent it to me, because he knew what I’d been dealing with and sent it along.’

She later added, ‘And it was really surprising timing that we found this script at that moment in my life.’ 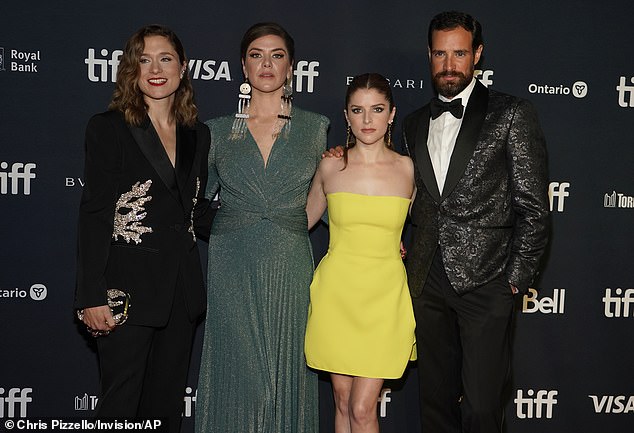 Group photo: Anna was pictured with those involved in the film, including director Mary Nighy, Kaniehtiio Horn and Charlie Carrick 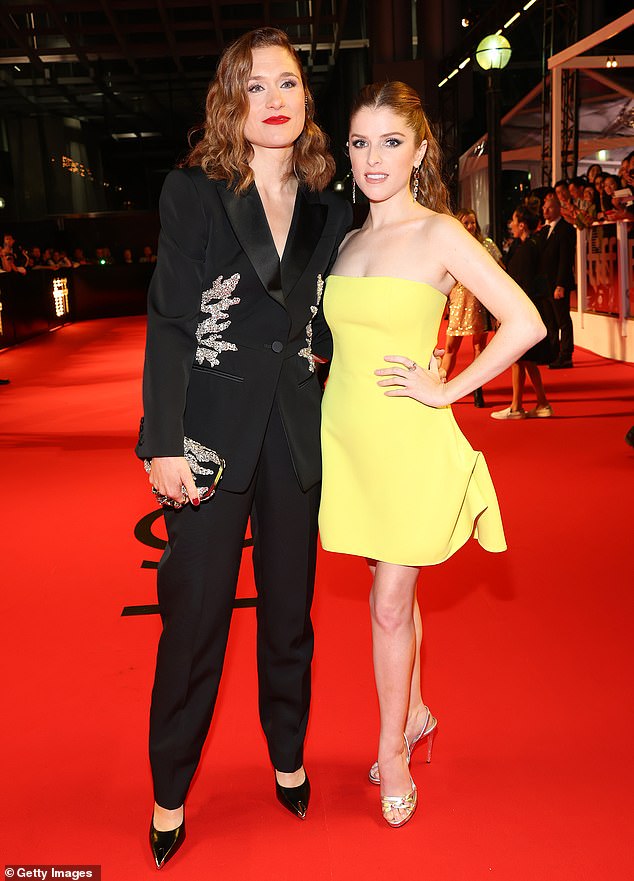 Talented duo: The actress was pictured with the director, Mary, as they walked the red carpet 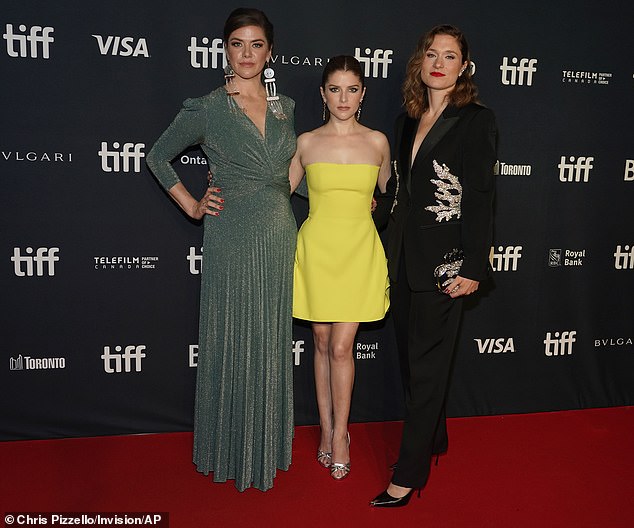 Special night: Before watching the film, Anna took one last photo with her co-star Kaniehtiio Horn and director, Mary Nighy

Before getting ready to walk the red carpet, Anna had quite an adventurous day and got stuck in an elevator in Toronto before the premiere.

‘I got in the wrong elevator at the wrong time,’ Anna later joked while at the photo and video studio for People and Entertainment Weekly at TIFF.

I got out. Some lovely Canadian firefighters had me crawl out the top of the hatch. But, yeah, it was, like, seven of us in an elevator just waiting to be rescued by firefighters. It was so absurd that it would happen on a film press tour that it just seemed so immediately comical,’ she added.

She also filmed the incident and her rescue, which she shared with her fans and followers on her main Instagram page. 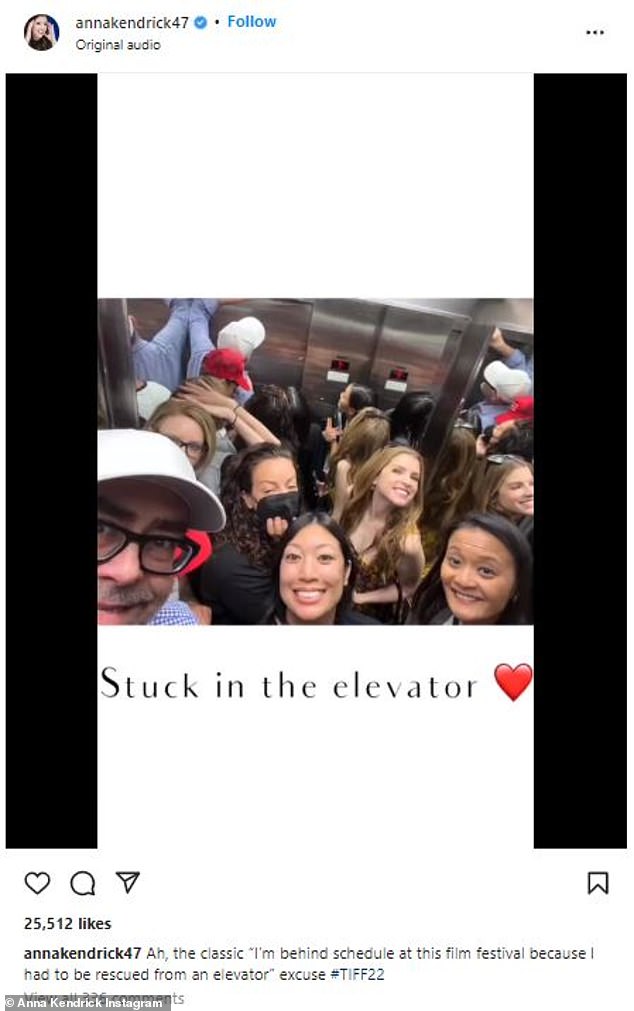 Classic excuse: ‘Ah, the classic “I’m behind schedule at this film festival because I had to be rescued from an elevator” excuse #TIFF22,’ she wrote as a caption 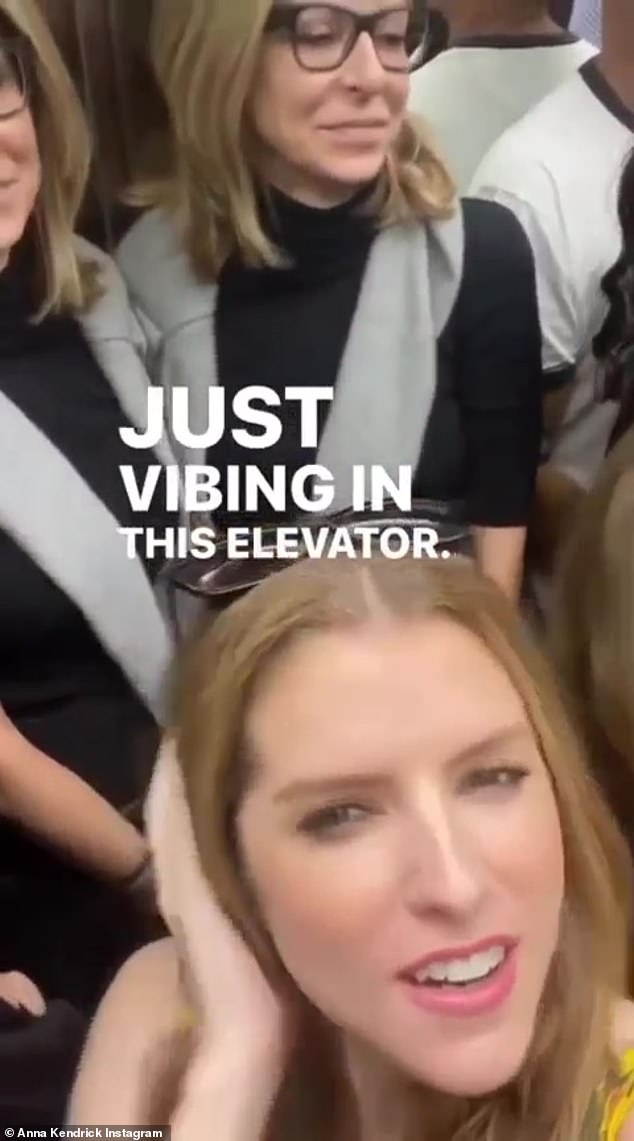 Just vibing: The Pitch Perfect franchise star also kidded that she was ‘vibing’ the experience and that everyone was loving it

The clip showed the actress trapped in the elevator full of other people, while making jokes such as, ‘Guys, we have to ration the limited food supply.’

Anna also gave a behind the scenes look of her escape out of the elevator through the roof once the firefighters came to help everyone out.

She posed with a group of firefighters and declared her love for them after the rescue. 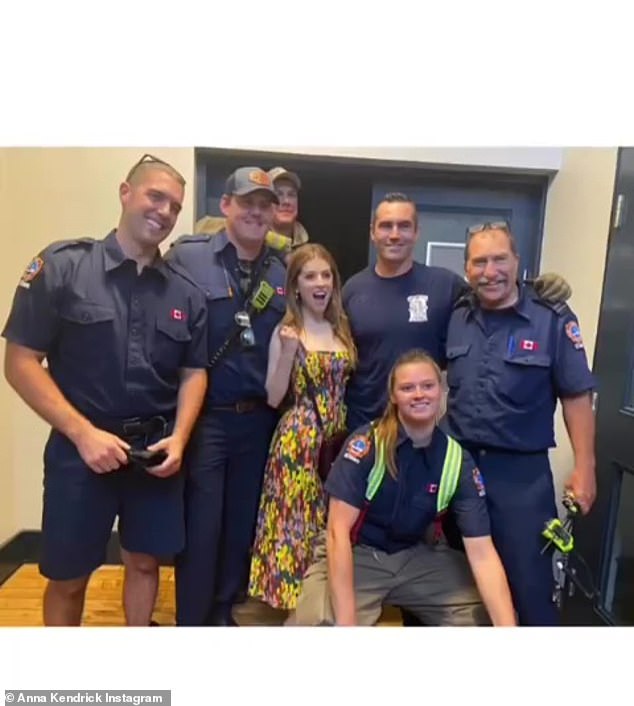 The rescuers: The rescuers posed with Anna after the actress got out of the elevator earlier on Sunday 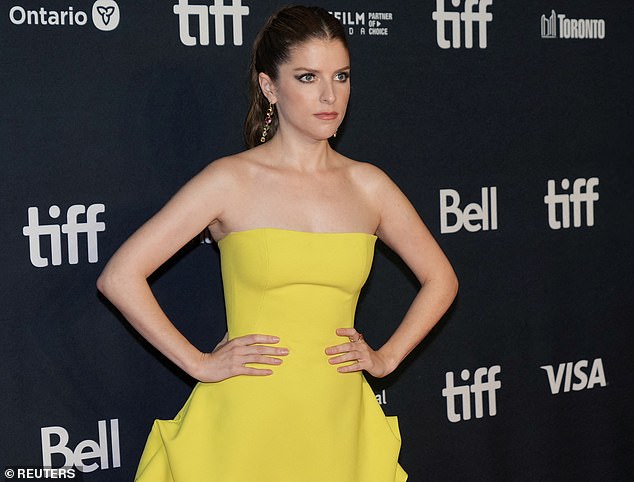 Excited: After her elevator rescue, Anna appeared to be in high spirits hours later at the Alice, Darling premiere