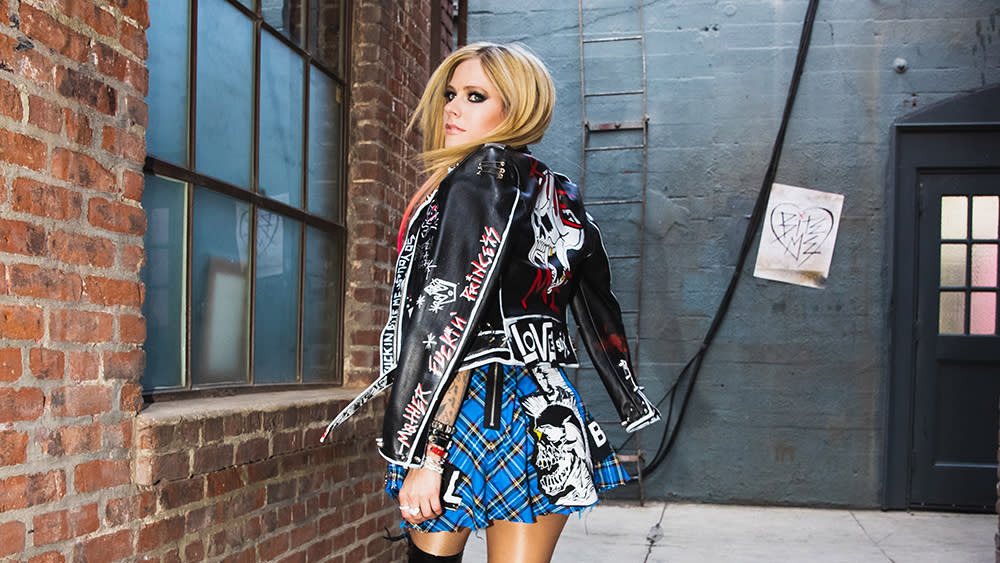 Avril Lavigne‘s first time visiting the Hollywood Walk of Fame coincided with a major moment in her life. It was 2001, and the then-16-year-old had traveled to Los Angeles to work on what would become her seven-times platinum debut album, “Let Go.” She was staying at the Roosevelt Hotel, which is on the famous boulevard, and ventured out to take a stroll among the stars.

“It’s a bit of a full-circle moment for me because this is where I made my album,” Lavigne tells Variety in advance of receiving her own star on the Walk of Fame on Aug. 31. “My first time coming to LA, that’s what I did. I walked down the strip and checked out the stars. I took a picture, and I can’t remember [which star] it’s with, but I’m wearing a sweatshirt that says ‘skateboarding is not a crime.’”

Lavigne is all smiles in the photo, lying on the ground with her arm stretched across what appears to be Tom Cruise’s star. Her ambition and wide-eyed excitement, not knowing what lay ahead, shines through even 20 years later — and without her signature smokey eye, Lavigne looks like any other teenager in the early 2000s.

Less than a year later, in March 2002, Lavigne released her debut single “Complicated.” A ballad at its core with a pop-rock flair, the song skyrocketed Lavigne to record-breaking heights as it dominated radio and became the best-selling single by a female Canadian singer. With lyrics that virtually anyone could relate to — about a person trying to be someone they’re not — Lavigne struck a rare chord with the masses and continued on that hot streak with the release of her debut album in June, home to such timeless hits as “Sk8er Boi” and “I’m With You.”

That album, “Let Go,” celebrated its 20th anniversary this year, but Lavigne clearly remembers the girl who brought it into the world.

“[‘Let Go’] was a lot of great songs that I’d written from my perspective as a teenager fresh out of high school,” she says. “Going through having crushes and boyfriends for the first time and experiencing all that – it was relatable.”

But as much as everybody could grab onto the album’s themes of young love and heartache, Lavigne presented herself as an outsider. From her clothes (skater-chic) ​​to her persona (unapologetically badass) to her music videos (instead of choreographed dances, Lavigne trashed malls), Lavigne insists it wasn’t manufactured.

“Everything I was doing, I was just a real-ass bitch,” Lavigne says. “Nothing was ever too thought out or calculated. I was pretty innocent and naive as to what was even happening around me. And so when I look back and think, ‘Oh, wow, so many people connected with it,’ it’s because I was so normal and me. It would have been really easy for a record label to be like, ‘We’re going to curl your hair, we’re going to put you in these teeny bopper outfits to look sexy’ or whatever. And I was just wearing baggy clothes. I think it made it so it was really about the music.”

Although Lavigne leaned a bit more into her pop-star side later in the 2000s – ditching jeans for shorts and fishnets in more upbeat singles like “What the Hell” and “Girlfriend” – her zero-fucks-given attitude and instantly recognizable voice remained. . And today, she still plays her biggest hits, from “Let Go” and beyond, at every show.

“I feed off people’s energy, and people fucking go apeshit when I play ‘What the Hell’ and ‘Girlfriend’ and ‘Sk8er Boi,'” says Lavigne, who recently embarked on a six-week solo tour in Canada before joining Machine Gun US dates for Kelly. “I’m also proud of myself for achieving what I did with those songs – hit songs that did so well worldwide. That’s really hard to do. It’s a really beautiful thing when I can see that people still know the songs today and are having the time of their lives screaming the lyrics back to me.”

It’s not lost on Lavigne how rare it is for a female artist to be playing arenas to a dedicated fan base 20 years into a career. For her, it’s all about evolution. After releasing the introspective “Head Above Water” in 2019, followed by two years of the COVID-19 pandemic, Lavigne found herself craving to return to her punk roots. That pivot came just in time as the music industry also circled back around to the sound with Machine Gun Kelly and Mod Sun – both of whom have become close friends, and in the case of Mod Sun, her fiancé – bringing it to a new generation alongside Olivia Rodrigo and Willow Smith.

“My last album had so many ballads, I was like, ‘I need a ballad break, like let’s just rock out,'” says Lavigne, who worked on the album with Travis Barker, Sun and John Feldmann of Goldfinger. “I was working with authentic rock stars who aren’t just professional songwriters, like all of us in a room – it was like, let’s just do what we know. And there was no overthinking it.”

The result was “Love Sux,” released in February, a fiery return to form for the princess of pop-punk. With features from Kelly, Blackbear and Blink-182’s Mark Hoppus, the 12-track album presents a fully formed, completely confident Lavigne at the top of her game.

“You have to be really strong, because it’s fucking hard,” Lavigne says when asked her advice for younger women in the industry. “It’s gnarly just dealing with stuff day to day. There’s a lot of pressure. It’s you — your face, your name, your image — so you need to really have a clear sense of self and follow your gut to find happiness. And just be as authentic as possible, because I think when you are, that’s when people connect.”

At only 37, Lavigne still has a lot she wants to accomplish – within music and outside of it. Beyond putting out another album, which she says is coming soon, Lavigne is working on a movie based on her iconic hit “Sk8er Boi.” While she’s tightlipped on the details, she says there is a writer-director attached to the project and many of her musically-inclined friends will be making cameos.

Lavigne also wants to revamp her clothing line, Abbey Dawn, which she founded in 2008 and rocked in many of her music videos, and maybe start a makeup line so fans can perfect her black liner look. But what makes her light up most is the possibility of starting her own cooking show.

The kitchen, like the stage, is where she feels most at home. As for what’s on the menu, “Basically, I’m good at everything and I can make anything,” Lavigne says with a laugh. “I’m really good at Italian and just on-the-spot making homemade pasta sauces.”

But until the world gets a taste of “Sk8er Boi-lognese,” Lavigne is perfectly content with life on the road as she wraps touring with Kelly and heads to play the festival circuit in September.

“It’s still so much fun,” she says of performing. “I’m having a blast – and I think I always will.”