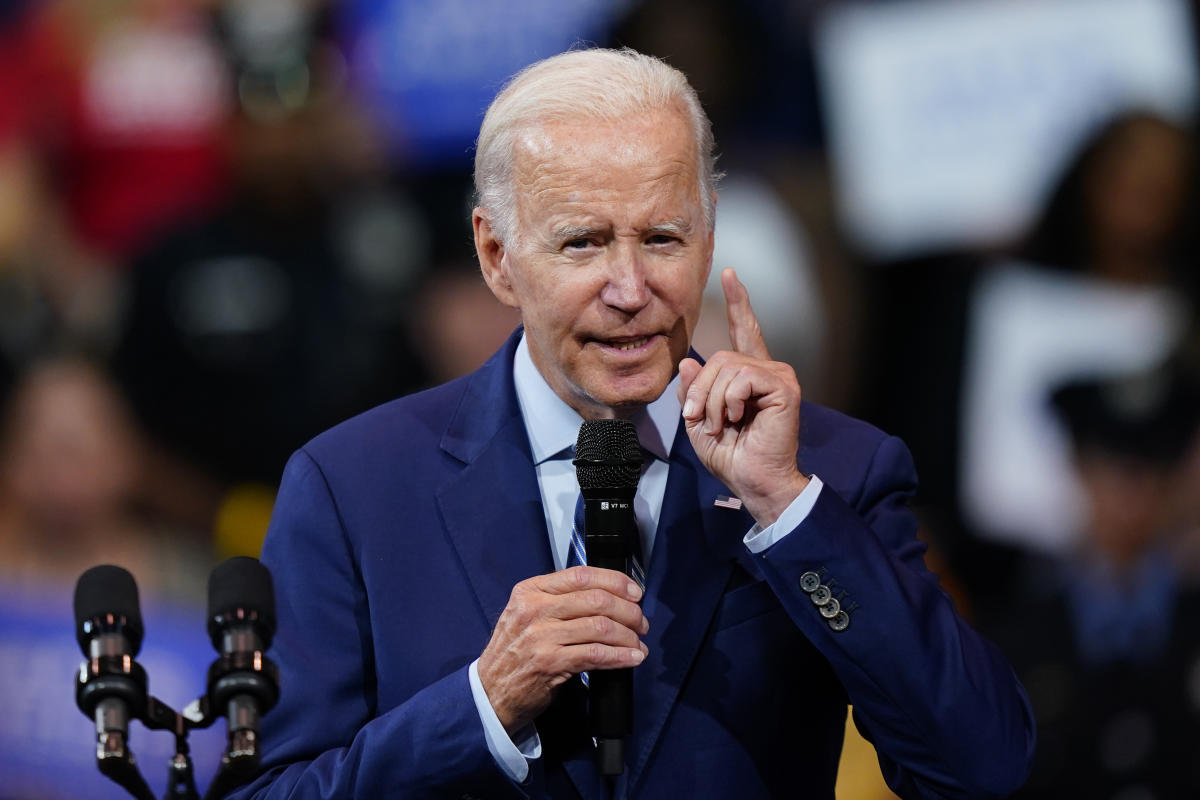 WASHINGTON (AP) — Nearly two years after he defeated Donald Trump, President Joe Biden has some unfinished business he wants to settle with the restive forces of Trumpism.

Biden planned to use a prime-time speech Thursday night at Independence Hall in Philadelphia to frame the November elections, less than 10 weeks away, as part of an ongoing battle for the “soul of the nation.” It’s a reprise of his 2020 campaign theme that he is using now to cast the current stakes in as dire terms as those that sent him to the Oval Office two years ago.

Biden, who largely avoided even referring to “the former guy” by name during his first year in office, has grown increasingly vocal in calling out Trump personally. White House officials say that reflects the urgency with which he views the threat of Trump and his loyalists.

Feeling emboldened by a series of legislative wins, the president is sharpening his criticism of Republicans as the “ultra-MAGA” party — a reference to Trump’s “Make America Great Again” campaign slogan — that opposes his agenda, embraces conservative ideological proposals and spreads Trump’s false claims about the 2020 election.

“What we’re seeing now is either the beginning or the death knell of an extreme ‘MAGA’ philosophy,” Biden told Democrats at a Maryland fundraiser last week. “It’s not just Trump, it’s the entire philosophy that underpins the — I’m going to say something, it’s like semi-fascism.”

In Philadelphia, White House officials said, Biden intends to hark back to the 2017 white supremacist protest in Charlottesville, Virginia, which he says brought him out of political retirement to challenge Trump. Biden plans to argue that the country faces a similar crossroads in the coming months.

“The president thinks that there is an extremist threat to our democracy,” White House press secretary Karine Jean-Pierre said Wednesday. “It’s not stopping. It’s continuing.”

Biden allies stressed that he was not rejecting the entirety of the GOP and would use his remarks to call on traditional Republicans to join him in condemning Trump and his followers. It’s a balancing act, given that more than 74 million people voted for Trump in 2020.

Larry Diamond, an expert on democracy and senior fellow at the Hoover Institution at Stanford University, said calling Trump out for attacks on democracy “can be manipulated or framed as being partisan. And if you don’t call it out, you are shrinking from an important challenge in the defense of democracy.”

Even this week, Trump was posting on his beleaguered social media platform about overturning the 2020 election results and holding a new presidential election, which would violate the Constitution.

Timothy Naftali, a presidential historian at New York University, said it’s not unusual for there to be tension between a president and his successor, but it’s “unprecedented for a former president to be actively trying to undermine the US Constitution.”

“The challenge that President Biden faces is to get on with his agenda while still doing what he needs to uphold the Constitution,” Naftali said. “That’s not easy.”

The White House has tried to keep Biden removed from the legal and political maelstrom surrounding the Department of Justice’s discovery of classified documents in Trump’s Florida home. Biden has taken advantage of some Republicans’ reflexive condemnation of federal law enforcement.

Biden’s appearance Thursday night was promoted as an official, taxpayer-funded event, a mark of how the president views defeating the Trump agenda as much as a political aim as a political one. The major broadcast television networks were not expected to carry the address live.

House Republican leader Kevin McCarthy planned to speak Thursday afternoon in Scranton, Pennsylvania, where Biden was born, about “Biden’s assault on the soul of America,” accusing the president of planning to “continue to disparage hard-working Americans.” Previewing his remarks on Fox News, McCarthy, R-Calif., said Biden was “trying to distract from the disaster that he’s created in this country.”

Biden’s trip to Philadelphia will be one of three to the state within a week, a sign of Pennsylvania’s importance in the midterms, with competitive Senate and governor’s races. Trump plans a rally there this weekend.

The White House intended the speech to unite familiar themes: holding out bipartisan legislative wins on guns and infrastructure as evidence that democracies “can deliver,” pushing back on “extreme” GOP policies on guns and abortion that are out of step with most people’s views , and rejecting efforts to undermine confidence in the nation’s election or diminish its standing abroad.

The challenges to democracy have only multiplied since the tumult surrounding the 2020 presidential election.

Lies surrounding that race have triggered a wave of harassment and death threats against state and local election officials and new restrictions on mail voting in Republican-dominated states. County election officials have faced pressure to ban the use of voting equipment, efforts generated by conspiracy theories that voting machines were somehow manipulated to steal the election.

Candidates who dispute Trump’s loss have been inspired to run for state and local election posts, promising to restore integrity to a system that has been undermined by false claims and conspiracy theories. Some have claimed widespread fraud and supported efforts to decertify Biden’s win.

There is no evidence of any widespread fraud or manipulation of voting machines. Judges, including those appointed by Trump, dismissed dozens of lawsuits filed after the election and Trump’s own attorney general has called the claims bogus. Yet Associated Press-NORC Center for Public Affairs Research polling has shown about two-thirds of Republicans say they do not think Biden was legitimately elected president in 2020.

This year, election officials face not only the threat of foreign interference but also ransomware, politically motivated hackers and insider threats. Over the past year, security breaches have been reported at a small number of local election offices in which authorities are investigating whether office staff improperly accessed or provided improper access to sensitive voting technology.

Associated Press writer Christina A. Cassidy in Atlanta contributed to this report.