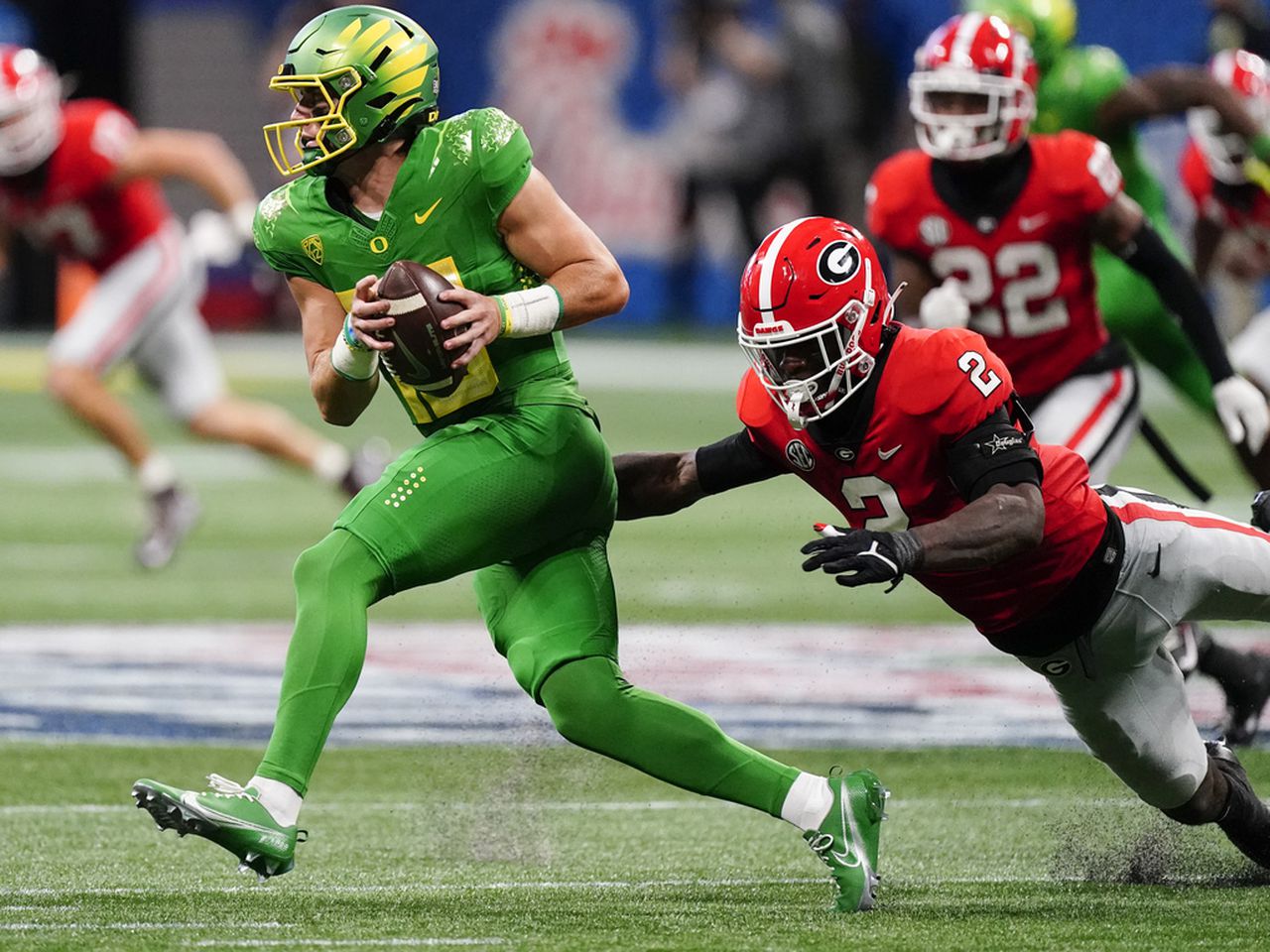 You don’t want to overreact to one game, especially the kind of colossal mismatch Oregon-Georgia proved to be.

But boy, what a drubbing.

Bo Nix made some dismal throws that will stick with Ducks fans, notably the two first-half interceptions that killed any hope of the Ducks hanging with the Bulldogs. But also a deep ball that led receiver Chase Cota right into a nasty collision with Georgia’s safety.

The miscues made it easy to overlook some of the nice moments from Nix in his Ducks debut.

Might as well embrace those, since Dan Lanning left little doubt about who he will be leaning on going forward.

“We have other quarterbacks on our team that can obviously compete as well,” Lanning said, “but Bo is our quarterback.”

Ty Thompson will continue to wait, as will the fans clamoring to see the former five-star recruit take the field.

Nix mostly looked comfortable against Georgia’s pressure. The mistakes were glaring, no doubt, but he also moved the ball efficiently and made smart decisions to run for first downs.

Chalk up a lot of that to a respectable game plan from Ducks offensive coordinator Kenny Dillingham, who knew not to ask too much of Nix and played to his strengths.

Things quickly spiraled, but the Ducks still accumulated 313 yards of offense and picked up 21 first downs. They just suffered some brutal drive-by killers.

Both of Nix’s interceptions came on first down when the Ducks had started to gather steam. The second was a particularly bitter pill. Trailing 14-0, the Ducks had just reached the Georgia 29-yard line after a 16-yard completion to Mar’Keise Irving became a 31-yard pickup after a horse collar penalty.

Then Nix tried to thread a pass into triple coverage. That would have been an interception against Georgia, Eastern Washington or Nestucca High School.

Before that turnover was probably the one time it felt like the Ducks had momentum. Would the outcome have been different if Nix had simply made a better read? Probably not. Georgia was too big, too fast, too good. But that was the end of the Ducks’ challenge.

Nix gamely stood in and tried to lead the Ducks to a consolation touchdown in the final minutes of the fourth quarter. But his pass on fourth and goal from the 2 missed Terrance Ferguson. It was an uneven, unspectacular and, frankly, not unexpected performance by Nix.

Ultimately, we need to see more from the transfer before rendering a final judgment. But it won’t matter if the quarterback can get you to the goal line if he can’t get you past it.

Had to get in one trip to Waffle House while in Atlanta. So I was understandably inspired that tweet after Georgia rolled comfortably past the 17 1/2-point spread: “Ducks smothered, Dawgs covered.” I might have taken a step further, though, since the Oregon defense was scattered, diced and chunked. Whoever came up with the Waffle House menu should have been a sportswriter.

I mentioned this in Saturday night’s column, but … who are the offensive playmakers for Oregon? No one had more than four catches, and Nix targeted 11 different receivers. Similarly, the Ducks deployed five running backs. Was that a function of mixing it up against an imposing Georgia defense? Or a sign that no one has managed to separate himself a month into practice? Those of us who assumed Byron Cardwell would be the clear No. 1 back were badly fooled. He had just four carries for 28 yards.

It was striking to pivot from Lanning’s steadfast commitment to Nix despite two first half interceptions to Boise State coach Andy Avalos yanking fourth-year starter Hank Bachmeier in Corvallis after a pair of early picks.

That Beavers defense was as advertised on Saturday night. Good enough to inspire a regime change in Boise.

Jaydon Grant, Rejzohn Wright and Alex Austin all had interceptions, while the Beavers also recovered a pair of fumbles. It’s a good thing, too, because by the third quarter, the offense stalled and Bachmeier’s replacement, Taylen Green, found some mojo running the ball.

If the Beavers hadn’t built that early cushion, it might have been a different outcome.

AND noted on Twitter that this felt like a must-win for Oregon State, which seems crazy considering it was just their season opener against a quality opponent. But three of the Beavers’ next four games are at Fresno State, against USC and at Utah.

They might not be favored in any of them. If Jonathan Smith’s team didn’t take care of business against Boise State, it would have been easy to imagine a 1-4 start, and suddenly all that preseason optimism would be out the window.

Now? The Beavers will be knocking on the door of the top 25.

Chance Nolan looked much better throwing the ball downfield than a year ago, particularly when targeting tight end Luke Musgrave. Musgrave hauled in six catches for 89 yards. That’s clearly the Beavers’ most reliable connection. One wonders what the Beavers will do when better defenses take that away.

Smith sure played things close to the vest with freshman running back Damien Martinez.

By the end of Saturday night, he led the Beavers in carries with 11, edging Fenwick, who had 10. Martinez finished with 40 of the Beavers’ evenly distributed 178 rushing yards.

A lead back that doesn’t necessarily make, but it’s clear the Beavers have bigger plans for Martinez than they might have let on throughout training camp.

In his last two years of high school in Texas, Martinez rushed for a combined 57 touchdowns and nearly 2,800 yards. You could see why on Friday. He looked every bit the part of an Oregon State power back, carrying defenders and lunging for extra yards.

“Physically he doesn’t look like he’s 18 years old,” AJ Steward, OSU’s running backs coach, said last week. “It’s just the commitment that he has to becoming a great player (that) just makes you really confident that he will become that.”

Jack Colletto remains the most unique player anywhere in college football. He recovered a fumble and busted off a 41-yard touchdown run for the Beavers when they needed it most. Loved all the ways Smith used him against Boise State. He’s the one guy teams seem to have no answer for.

The expanded College Football Playoff can’t get here fast enough for the Pac-12.

Or maybe after Saturday the conference would rather just sit it out for a bit.

It was a good day for the critics who suggested a 12-team playoff will just lead to more blowouts and delay the inevitable.

The gap between Georgia and Oregon was shocking. And Utah, the Pac-12′s supposed best, couldn’t take care of business against a team picked to finish fourth in its division.

Just a brutal showing for the Pac-12 on the national stage.

A mere loss to Georgia wasn’t going to knock Oregon out of the playoff picture if they went on to run the table. But that was such a thorough thrashing that it’s unfathomable the Ducks would earn a nod over other one-loss teams.

The Ducks? And one-loss team? Not likely, based on what we saw on Saturday. So it’s a moot point, anyway.

At least Utah went toe-to-toe with the Gators in inhospitable surroundings. And appeared set to pull out the win before a head-scratching interception by Cam Rising. The Utes will still be a force this season. Some of their national luster has just worn off.

Of course, this led to plenty of handwringing that USC and UCLA can’t get away from the dismal Pac-12 fast enough, although I’m not sure if that was before or after UCLA had to rally to beat Bowling Green.

Saturday’s results not withstandingthe Pac-12 is doing backflips over Friday’s decision to widen the playoff field.

You want to keep teams from ditching the conference? A direct path to the playoff just might do it, and whenever expansion is implemented — be it 2026 or sooner — more teams will have more to play for. That’s a great thing for the sport and for the fans.

A four-team playoff was always too exclusive. College football’s biggest problem is the lack of parity near the top. The national semifinals are often just procedural. Here’s hoping that giving more teams a shot at the playoffs raises the bar across the sport.

And that Oregon finds a way to improve before then.