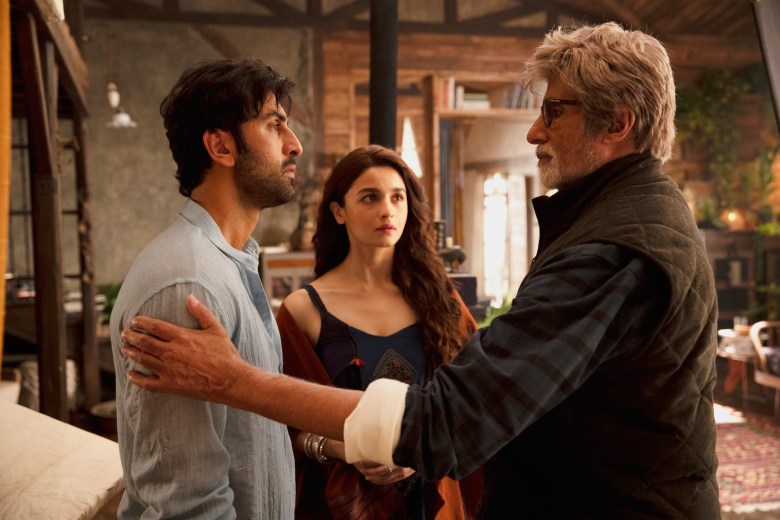 A sci-fi fantasy and classic Bollywood romance are woven together by mystic powers (and Amitabh Bachchan).

Superhero movies and romantic comedies agree: Love is the most powerful force in the universe. It compels iconic heroes as well as wayward lovers, resets the moral compass and cleanses the soul. That is the ethos behind “Brahmāstra Part One: Shiva,” the first installment in a Bollywood trilogy from director Ayan Mukerji. The film is both sci-fi/fantasy and Bollywood romance, an ambitious introduction to a mythological cinematic universe with the expected hiccups of building a massive world from scratch. It’s an admirable attempt and unmissable theatrical experience for any Bollywood fan.

“Shiva” sets up Mukerji’s “Astraverse” saga, in which a group of humans protect the sacred light of the universe in its various forms, called Astras: Water, earth, wind, and the film’s fire — but also animal powers, like the bull or monkey. The Brahmāstra is the last of these energies, carrying the essence of all of them, broken into three parts and kept separate to ensure the world’s safety. This and the other Astras are entrusted to and kept secret by an Illuminati-esque group known as the Brahmansh.

The film explains all of this up top (though better than most because it’s narrated by Bollywood’s biggest superstar Amitabh Bachchan), but too early; after the introductory sequence we switch to Shiva (Ranbir Kapoor), the ordinary-yet-extraordinary hero of this story, and for the next hour both he and we need barely think of anything as trivial as world-saving Astras, because there’s a girl .

Shiva falls hard and fast for Isha (Ali Bhatt) for reasons neither he nor the film can quite articulate. The real-life couple’s on-screen debut does not translate to the best career chemistry for either (which is fine and normal and actually speaks well of their acting ability with other scene partners). A lot of “Brahmāstra” hinges upon the notion that Shiva and Isha’s connection is as powerful as any Astra, but it feels less like two people falling in love than two people who watched too many Bollywood movies and mistook happenstance for destiny. When Shiva begins experiencing disturbing visions and spurts of power which reveal him to be the fire Astra, Isha joins him to find out what it all means.

On paper, “Brahmāstra” is not an explicitly Hindu film. The idea of ​​Astras is rooted in Hindu mythology, but tweaked for Mukerji ‘s vision his. The film is still rife with Hindu imagery and themes: the name Isha being a form of Lord Shiva’s wife Parvati; Sanskrit chants and song lyrics; the image of Isha and Shiva walking around a fire (part of the Hindu wedding ceremony); characters praying regularly and celebrating the Hindu festivals of Dussehra, Durga Puja, and Kali Puja. Only the villains have no discernible religion.

But the central themes — the coexistence of light and dark, and the triumph of good over evil — are universal. They are as intrinsic to Hindu texts as to Harry Potter, to “Lord of the Rings,” Star Wars, “Avatar: The Last Airbender” — any sci-fi fantasy epic you can name that “Brahmāstra” will likely resemble at one point or another.

Sadly, the film’s godless villains are painfully flat. Their leader is Junoon (Mouni Roy), whose entire identity is her scarlet-streaked hair and coal-black eyeshadow. A villainess could be an excellent showcase for any female actor, but not one so conspicuously underwritten and performed (the aforementioned eyeshadow is doing most of the heavy lifting). Junoon’s squaandered potential of her is a shame, and ironic considering how well she could have played out in the hands of someone like Bhatt herself.

For as much as the film seeks to lift up Shiva and Isha, the latter is criminally underutilized. It’s a step up from most portrayals of a romantic interest in a superhero movie, but disappointing given Bhatt’s known capability in films like “Raazi” or the recent “Darlings.” Isha is literally boiled down to Shiva’s “button”— the force that drives him and unlocks his fire powers his, a tool in his hero kit. She ‘s smart, brave, and loyal, standing firmly at his side her even without any Astras of her own, but constantly in need of saving — at least through Shiva ‘s eyes her. Kapoor himself doesn’t bring much to the role, nor does the role lend itself to innovation and challenge. The physical prowess he brings to dance sequences translates to stunt work and what can only be described as fire bending, but Shiva is otherwise indistinguishable from the puppy dog ​​sad boy archetype all but synonymous with Kapoor’s leads (some of which Mukerji also directed).

The cast is otherwise bloated; the leads’ forgettable friends disappear after the first segment, in which they are overwhelmingly eclipsed by a group of children in Shiva’s care. Once he shows up halfway through the film, Bachchan is a welcome grounding presence, striking a perfect balance between stern and benevolent as Guruji, but a handful of other disciples at his ashram are easy to lose track of and weigh this section down.

Mukerji’s script keeps the story focused and moving, even with a few intermittent dumps of exposition. The comedy is notably strongest, with sharp jokes popping up in between banal romantic and dramatic dialogue — though some of this may be lost on non-Hindi speakers. The resultant tone is a little disorienting as the film tries to balance its emotional bildungsroman with appropriate levity, but it works overall. To that end, the first act moves quickly, but pacing is inconsistent and the finale too drawn-out.

“Brahmāstra” is one of the most expensive Indian movies ever made, with an estimated budget of 410 crores or over 50 million dollars. The investment pays off with dazzling CGI of the Astra’s light powers, similar to the visuals on “Ms. Marvel.” Since there’s no real-life comparison for how godlike light power would look, “Brahmāstra” gets to create its own visual language, packed with brightness and saturation matched in the lush cinematography and coloring. The film’s editing can be heavy-handed bordering on chaotic, but anyone who has ever watched an Indian soap opera will feel right at home.

Pritam’s soundtrack manages to dull his own talents as composer and the versatility of singer Arijit Singh. “Kesariya” and “Deva Deva” are more alike than different, barely clearing the slipping bar for originality in a Bollywood music scene increasingly populated by remixes and any old song autotuned and retitled “2.0.” “Dance Ka Bhoot” is at least charming and folksy, serving to introduce Shiva’s character through Kapoor’s formidable dance talent. Composer Simon Franglen’s background score, while serviceable, lacks the distinction necessary for a film of this magnitude, and might have benefited from more Indian classical influences given the film’s themes.

“Brahmāstra” throws a lot at its audience, especially with the rules and history of the Astras, which wasn’t necessarily needed in “Part One.” After all, it’s not like audiences understood the intricacies of Infinity Stones back when they were introduced in “Age of Ultron.” The film accomplishes most of what it sets out to do, such as building out Shiva’s history and path forward, and the look and feel of Astraverse combat and training. The second half of the film hits some predictable but satisfying twists, leading up to a reveal that will have to wait until “Part Two.” Much like other big blockbusters, it leaves audiences wanting more.

“Brahmāstra Part One: Shiva” is now playing exclusively in theaters.

Sign Up: Stay on top of the latest breaking film and TV news! Sign up for our Email Newsletters here.