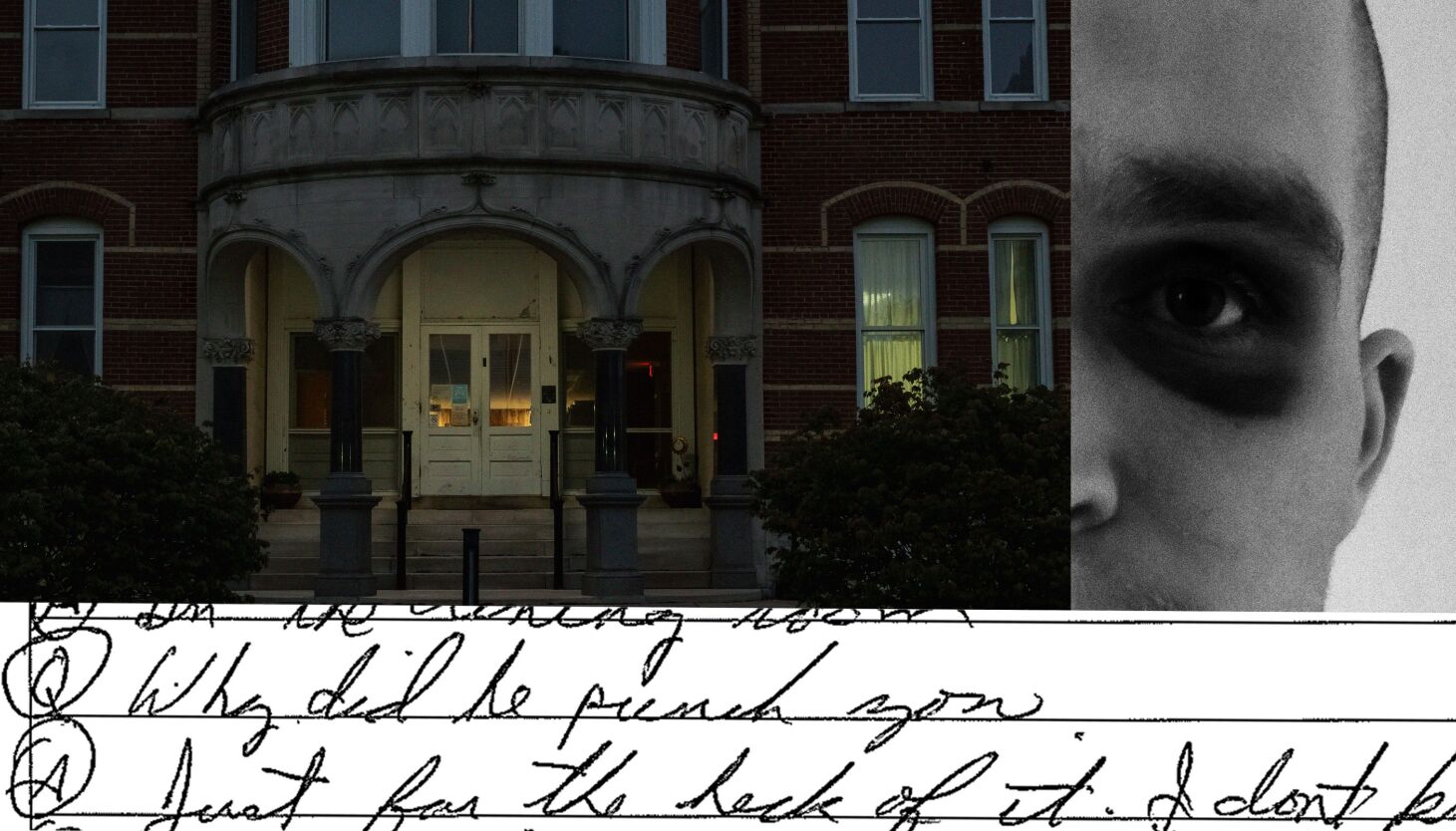 As Blaine Reichard rose from a breakfast table at the Choate Mental Health and Developmental Center in southern Illinois, a worker ordered him to pull up his sagging pants.

A 24-year-old man with autism and developmental disabilities, Reichard did not obey.

“I’m a gangsta!” This is how we do it where I am from!” replied Reichard, who, despite his defiance, still slept with a Teddy bear.

Investigators heard varying versions of what happened next, but multiple witnesses told the Illinois State Police that Reichard was held down by four mental health techs and repeatedly punched in the face, according to a state police report obtained under the Freedom of Information Act. Reichard cursed and spat, trying to fight back, which was met with more blows.

Reichard was dragged to his room and strapped to his bed, where a fellow resident told police he saw mental health tech Mark Allen pummel Reichard’s face; crime scene photos show blood splattered in his room.

Allen also sent a text message, obtained by police, to a colleague: “we just got done strappin Blaine in… I f***** his world up this morning.” “You guys always do lol…” she responded. Reichard told the police that Allen threatened him with death if he reported the beating.

A months-long investigation by Capitol News Illinois, Lee Enterprises and ProPublica has found that the 2014 incident is one of many instances of mistreatment at the facility managed by the Illinois Department of Human Services.

Reporters reviewed thousands of pages of documents from IDHS and its inspector general; the Illinois State Police; officials in Union County, where the facility is located; and other entities. They also spoke with current and former employees and advocates and with residents and their guardians, revealing a systemic pattern of patient abuse, neglect, humiliation and exploitation.

Over a 10-year period through 2021, the state police opened at least 40 criminal investigations into alleged employee misconduct at Choate, more than at any of IDHS’s other southern Illinois facilities.

Using court records and police case files, reporters found that at least 26 Choate employees were arrested on felony charges over roughly the same period, including those accused of whipping, choking, punching and raping residents.

In a written statement to reporters, IDHS spokesperson Marisa Kollias acknowledged that the problems at Choate are the “result of longstanding, entrenched issues dating back decades.” She said the agency has “taken aggressive measures” to improve, including increasing staffing and training and appointing an independent legal advocacy organization to monitor conditions inside the facility.

“In essence, many of these individuals can be ‘the perfect victim’ for a crime because it is easy to cast doubt on someone who has mental challenges or can’t give a statement due to their mental health status,” said Tyler Tripp, the state’s attorney in Union County.

Records show that the IDHS inspector general’s office — the agency’s internal watchdog — investigated more than 1,500 reports to its hotline that alleged patient abuse or neglect by employees at Choate over a 10-year period ending in 2021. That’s more than any of the 12 other facilities operated by IDHS, some of which have more patients than Choate. Those reports include roughly 800 claims of physical abuse, 100 of sexual abuse and 600 of mental abuse, financial exploitation or neglect.

Internal investigators found about 5% of the cases to be substantiated, roughly in line with the nationwide substantiation rate. But Choate has faced repeated criticisms for interfering in their investigations into alleged wrongdoing.

The number of abuse and neglect allegations from Choate reported annually to the inspector general has been climbing. There were more than 200 reports in fiscal year 2021, more than double the number from fiscal year 2012.

In addition to the charges of violence, reports from the inspector general and Union County court files show complaints, found to be substantiated, that staff tortured and humiliated patients, including one who was marched naked in front of peers for taking too long in the shower and another who was forced to drink an entire cup of hot sauce.

Kollias said the agency is concerned about the volume of reports but added that the high number of allegations could be a sign that staff and residents report potential misconduct at a higher rate than people at other facilities.

In the Reichard case, there was no call to the inspector general’s abuse hotline despite a legal requirement to make that call. At least three shifts of workers came and went without raising an alarm, the police report showed.

When security arrived on the unit Monday morning, Reichard greeted the officer and said, “Look what they did to me,” according to an employee who was on the unit but who is not authorized to speak publicly.

Fifteen months would pass before anyone was arrested. In March 2016, Allen was charged with three felony counts of aggravated battery and intimidation. Later that year, charges were filed against three other employees — Curt Ellis, Justin Butler and Eric Bittle — for helping to conceal the abuse and lying to the police.

But ultimately no one was held criminally responsible for the beating. Court records show that Ellis, Butler and Bittle all cut deals to plead guilty to misdemeanors. And nearly seven years after Reichard’s assault, Allen pleaded guilty to a felony — not for the beating but for destroying evidence by throwing away the towel he’d used to mop up Reichard’s blood. He was sentenced to two years of probation.

In an interview with a reporter, Allen acknowledged that Reichard had been assaulted but maintained it was not by him and declined to answer further questions. Butler did not respond to repeated requests for comment. Ellis and Bittle also did not respond to attempts to reach them, although a union representative said both had been made aware of the story.

The news organizations’ investigation found that this was not the only incident in which consequences were delayed or minimized. IDHS does not track employee arrests at its mental health and developmental centers, but court records show that 22 other employees have faced felony charges since the Reichard case. Of those, 11 pleaded guilty in exchange for reduced charges or probation, seven have cases pending, and four had cases dismissed. None has served prison time.

All four of those charged in the Reichard case continued to collect state paychecks for some time after the beating. Since the incident, Ellis, Butler and Bittle have received paychecks totaling more than $1 million combined. They are also receiving their scheduled raises, health insurance benefits, vacation time and service credit toward their pensions.

John “Mike” Dickerson, a unit supervisor who, according to police records, participated in restraining Reichard, was not charged but was reassigned to mow grass two years later, records show. Between the incident and his retirement in December 2017, he received $168,000 in salary, plus insurance and credit towards his pension. He now receives $39,000 a year in pension benefits. Dickerson declined to comment.

IDHS senior officials said these cases are outliers in terms of the amount of time employees spent on paid administrative leave, and a spokesperson said administrative reviews typically will not proceed until any criminal investigation is concluded.

While Allen was suspended without pay once he was charged in 2016, before that, he remained on payroll for 15 months after the incident, collecting nearly $56,000 while on administrative leave, IDHS records show.

Meanwhile, Reichard was discharged from Choate after the assault, but he was readmitted three years ago after he attacked his mother. Deemed by a judge to be unfit to stand trial, he lives in the Sycamore Unit, the same building where the assault occurred.