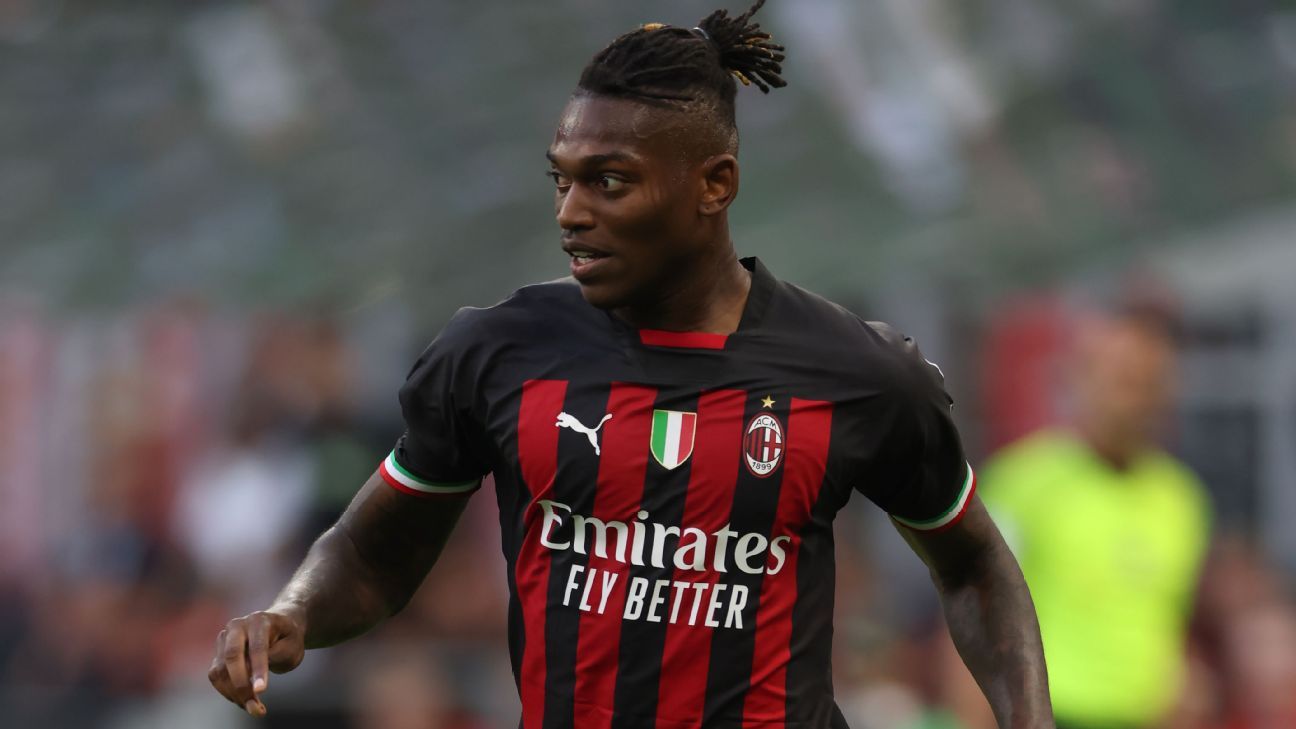 The summer transfer window has reached the Sept. 1 deadline, and there’s plenty of gossip swirling about who’s moving where. Transfer Talk brings you all the latest buzz on rumours, comings, goings and, of course, done deals!

Chelsea are discussing a potential move for AC Milan forward Rafael Leao before the summer transfer window closes on Thursday, according to that The Times.

It is reported that the Blues have turned their attention to the 23-year-old Serie A star, after they failed with an inquiry to land Paris Saint-Germain and Brazil international forward Neymar. Thomas Tuchel’s side are keen to land a forward and midfielder before the transfer deadline closes on Thursday, with Leao being one of the final names on their shortlist.

The Portugal international was a key player for the Rossoneri last season in a Scudetto-winning campaign where he contributed to 19 goals in 34 appearances. He had been linked with Real Madrid this summer, and it would reportedly take an offer of at least €115 million for the Serie A champions to consider parting ways with him.

Chelsea had previously been linked to Barcelona’s Pierre-Emerick Aubameyang, among others. The London side are without a striker after Romelu Lukaku returned to Internazionale and Timo Werner made the switch back to RB Leipzig.

08.28 BST: It looks like though Cristiano Ronaldo will be staying at Manchester United for now after manager Erik ten Hag said the forward is “happy” to stay at Old Trafford this season.

Ronaldo, who has been used as a substitute in the last two games, had told the club he wanted to leave for a team in the Champions League, but the 37-year-old looks set to remain at United until at least January.

“From the start we said we planned with him,” said Ten Hag ahead of Thursday’s trip to Leicester City. “We are happy with him, he’s happy to be here and we want to make the season a success together.

“We are all on one page. You can see in training that it is clear that he has the capabilities. He will fit in because…I don’t have to explain because he’s a great player. He will fit in every system or every style.”

08.00 BST: Chelsea have made a €50m bid to sign the Ajax and Mexico midfielder Edson Alvarezsources have told ESPN’s James Olley.

Blues head coach Thomas Tuchel is thought to be concerned about the club’s midfield options in the wake of Tuesday’s 2-1 defeat at Southampton and nagging injury concerns over key midfielder N’Golo Kante, who is set to be sidelined for around a month with a hamstring problem.

Sources have told ESPN that Ajax are under no pressure to sell having already allowed Antony, Lisandro Martinez, Sebastien Haller, Ryan Gravenberch and Noussair Mazraoui to leave the club in the summer transfer window.

Chelsea were keen on a move for the Barcelona midfielder Frenkie De Jong but the Dutchman has so far shown no interest in leaving Camp Nou.

– Cristiano Ronaldo only received one official proposal for his transfer, that from Saudi club Al-Hilal, according to that The Athletic. Ronaldo, 37, had been pushing for a move from Manchester United with hopes of playing in the Champions League, but Erik ten Haag said it was “clear” Ronaldo will stay at Old Trafford until at least January.

– Barcelona are considering a move for the LA Galaxy defender Julian Araujoaccordingly Fabrizio Romano. It is reported that the Blaugrana will decide on Thursday whether to make an approach for the 21-year-old Mexico international. The interest comes as USMNT star Sergino Dest is set to move to Camp Nou to AC Milan on loan, according to ESPN sources. Barcelona are also linked with Borussia Dortmund’s Thomas Meunier and Arsenal’s Hector Bellerin as Blaugrana manager Xavi Hernandez looks to find a solution at right-back.

– Despite a late move from PSG to land Milan SkriniarInternazionale have decided to keep hold of the 27-year-old defender, reveals Gianluca Di Marzio. The Serie A star was a key target for PSG this summer, and while they wished to return to the negotiating table, Simone Inzaghi’s side refused to enter any further discussions. It is reported that the San Siro hierarchy are now looking to offer him a new contract.

– Chelsea have made an approach to sign the PSV Eindhoven defensive midfielder Ibrahim Sangareaccordingly Eindhovens Dagblad. After Sangare signed a new contract with the Eredivisie club this summer, the Blues could now need to offer more than the €37m release clause that was in the 24-year-old’s previous deal. It is reported that while PSV are open to moving him on, they do not want to part ways with Sangare and Cody Gakpo in the same transfer window.

– Manuel Akanji is set to complete his move to Manchester City, reports Fabrizio Romano. The 27-year-old centre-back has been on the radar of a number of clubs this summer, having entered the final year of his contract at Borussia Dortmund, and it looks as though Pep Guardiola has won the race to sign him in a deal worth €17 million. The move is expected to be announced on Thursday.

– Fulham have made a late move in an attempt to sign the Blackburn Rovers striker Ben Brereton Diazunderstands The Athletic. The Championship forward scored 23 goals in 34 league starts last season, and the latest indicates that the Cottagers will challenge for the 23-year-old Chile international’s signature. He has previously been linked with Nice, who had a £10m bid rejected for his transfer earlier this summer.