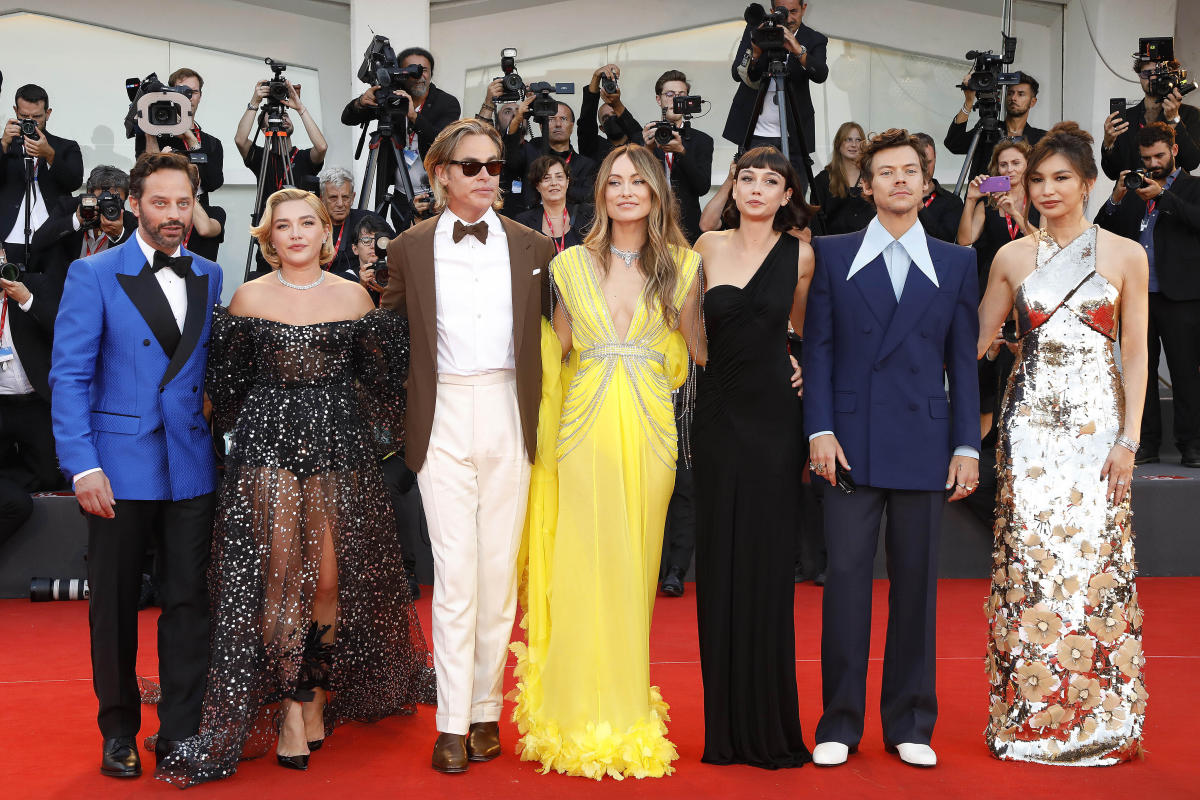 Don’t Worry Darling continues to generate a lot of press.

The Olivia Wilde–directed film premiered at the Venice Film Festival on Monday. While Wilde declared herself over the “endless tabloid gossip” around rumored friction among the cast, headlined by Florence Pugh and Harry Styles, social media clearly isn’t, as every interaction between the co-stars from weekend events are being analyzed. It’s led to one cast member — Chris Pine — officially denying that Styles spit on him at the premiere.

To back up, Shia LaBeouf was originally to star in the role that ultimately went to Styles. There is a discrepancy over whether Wilde fired LaBeouf (her take) or he quit (his take). Late last month, LaBeouf turned over to it Variety a video he said Wilde sent him asking him to come back to the film. In the same video, Wilde referred to the drama between him and Pugh, hinting that Pugh, whom she referred to with the condescending nickname “Miss Flo” needed “a wake-up call” to put her “mind and heart into” the project. Styles went on to land the roll. Wilde and her fiancé Jason Sudeikis split while filming and Wilde started dating Styles. Wilde of course was served custody papers by Sudeikis while doing a presentation about the movie at CinemaCon in spring. Pugh, who has been critical of the way the film is being marketedhas done little press for the film and has not explicitly said why, leading to no shortage of speculation.

That’s where we were on Monday as the press kicked off for Don’t Worry Darling. Pugh did not attend the press conference or photo call with the cast with Wilde explaining to reporters her film’s lead was tied up filming Dune: Part Two. However, she promised Pugh would make the premiere that night and gushed about her performance, calling her “a force” who turned in an “amazing” performance.

Wilde was asked directly about the reported rift between them and was dismissive in her response, saying, “As for all the endless tabloid gossip and all the noise out there, I mean, the internet feeds itself. I don’t feel the need to contribute. I think it’s sufficiently well-nourished.”

An event moderator cut off another reporter asking Wilde to set the record straight about what happened with LaBeouf. She added, “I think that question has been answered” — despite the fact that she hasn’t publicly responded to LaBeouf’s denial that he was fired or addressed the “Miss Flo” video.

With all that tension looming, Wilde was also careful not to be photographed next to Styles — whom she has been dating since late 2020 — in Venice. They arrived separately in Italy, taking different boats to events, and wouldn’t stand next to each other for photos. Any pictures of them side-by-side fuel tabloid stories, so they kept their distance. Pine has had his work cut out for him acting like a buffer.

Not long after Wilde explained Pugh’s absence at the press events, Pugh announced her arrival in Venice on social media with just two words: “I’m here.”

While Wilde and the cast did press, a video of Pugh sipping a drink in an unmissable purple Valentino outfit went viral and was a whole big mood.

Also notable, the actress brought her grandmother Pat as her plus-one. Perhaps it was a strategic move — maybe there would be fewer prying questions with her granny by her side as she faced the press — but Pugh later said on social media that it was long-planned and it ended up being the “most special moment I have ever had on a carpet” despite everything else going on.

Pugh joined the cast at the premiere on Monday night – and, boy, did she make an arrival. She stunned in a show-stopping Valentino gown. The look featured a sheer black corset-like bodice with a sparkly cape and train. It was a red carpet moment.

She made such an entrance, even her co-star Pine stopped to take it all in — and photograph her. She shared warm greetings with him and co-stars Nick Kroll, Sydney Chandler and Gemma Chan.

On the other hand, she kept a healthy distance from her onscreen husband Styles and from Wilde, who acts in the film in addition to directing it. The group photo of them all makes for awkward viewing with Wilde and Styles standing several feet apart at all times on purpose — and neither of them sharing air space with Pugh.

On the carpet, Pugh was reportedly asked what she found inspiring in the film and, again, gave a response that fuels rumors of a rift. “I think it’s very, very inspiring to see a woman push back and say ‘no,’ and question everything,” she replied. “It’s very exciting to see a woman do that on and off camera.”

While she has continued to make vague comments like this one — and hasn’t cleared up speculation on social media, which she often does when she’s the target of gossip — Pugh’s stylist, Rebecca Corbin-Murray, fanned the flames good and hard when she posted photos of Pugh at the premiere with the caption “Miss Flo” — Wilde’s needling nickname for Pugh in the leaked video to LaBeouf.

Don’t Worry Darling screened Monday night and received a four-minute ovation. Social media has been hotly debating whether or not Pugh acknowledged Wilde during it.

There was another raging debate over whether Styles spit on Pine at the premiere. And, yes, you read that right — we are discussing two grown men and saliva. As Styles sat down, he faced Pine and something unseen caused Pine to stop clapping, look down at his lap and make a strange face.

The debate over spit-gate led Pine to officially deny he was sleeping upon. His rep told Variety on Tuesday, “This is a ridiculous story — a complete fabrication and the result of an odd online illusion that is clearly deceiving and allows for foolish speculation. Just to be clear, Harry Styles did not spit on Chris Pine. There is nothing but respect between these two men and any suggestion otherwise is a blatant attempt to create drama that simply does not exist.”

Pine did look anguished doing press at times for this film. Another video of Pine and Styles went viral because Pine looked zoned out as Styles explained to a reporter why he liked making the thriller, one of his first movies as he branched out from pop stardom.

“My favorite thing about the movie is how it feels like a movie,” Styles said as Pine stared into space. “It feels like a real movie. Go to the movie theater. The reason why you go to watch something on the big screen.”

Amid all this drama, there are also rumors of stress on Wilde and Style’s relationship. Video has surfaced with Twitter users claiming Styles said no when told to stand near Wilde for a photograph.

He may very well have — they were clearly avoiding being photographed together — but they did, however, steal little moments.

While they’ve all left Venice, the drama continues to spin like a hurricane. On Wednesday it was reported that Pugh won’t attend the New York premiere of the film on Sept. 19. A source who was on the set of Don’t Worry Darling told Rolling Stone, “From what I understand, there is friction, but I don’t know why. It’s pretty clear she’s choosing not to be a part of the PR,” she said of Pugh. “It’s clearly not beneficial to Olivia to not have her be a part of the PR. It has to be a Florence decision.”

Pugh may be opting out of further frosty red carpet reunions, but she’s used social media over the last day to tout the Venice premiere of the film. In addition to posting about bringing her grandmother to the event and sharing her lewk for her “fleeting night” in Venice, she posted one of the group shots of Wilde and the cast and gave a “massive congratulations to everyone standing on that carpet.”

She went on to heap praise on “all the cast and crew who helped to make this movie,” but only called out Pine specifically, calling him the “no.1 photographer” and thanking him for “getting down on white pressed trousered knees for angles. Now that’s dedication.”

This story was originally published on Sept. 6, 2022 at 4:55 pm ET and has been updated with new information.