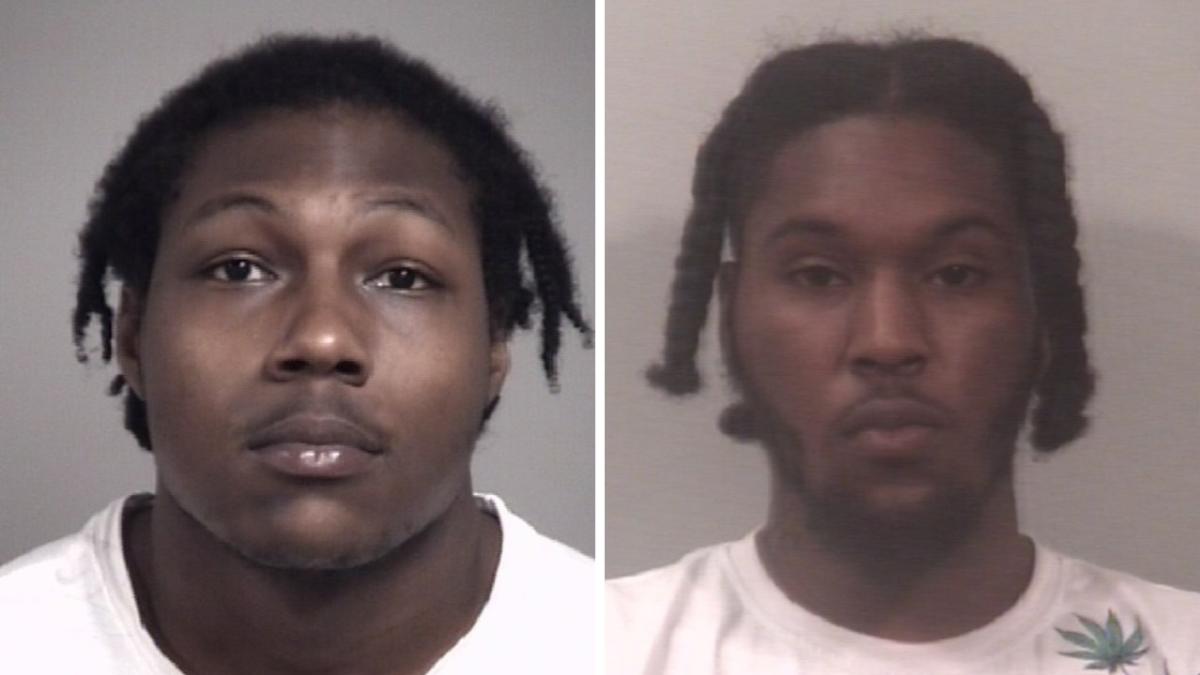 Officers shot a suspect they say fired at them inside the Concord Mills mall on Wednesday afternoon, according to the Concord Police Department. The mall went into lockdown following the shooting that happened around 12:30 pm and closed for the day.

Police said they responded to the mall for reports of three people stealing a credit card. After a chase through the mall, they said one of the suspects fired a gun at the officers. Police returned fire, hitting the suspect, according to an update from CPD Maj. Todd McGhee around 4:30 pm

The suspect, who was shot, is in critical condition. No officers were hurt during the shooting, police said.

Concord police confirmed Thursday that two 21-year-old men were arrested in connection with the incident.

Wuanell Hernandez, 21, of Charlotte, and Christian Tyson, 21, of Kannapolis, were arrested and taken to the Cabarrus County Jail.

The identity of the suspect, who the police shot at them, has not been released.

On Thursday morning, Concord Mills reopened for its normal operating hours from 11 am to 8 pm

In the update on Wednesday, McGhee said two Concord police officers went to the mall after someone called 911 saying three people stole their credit card from them while they were inside one of the stores.

The caller described what the suspects were wearing and where they were, so the officers were able to quickly find them, McGhee said. As soon as the officers tried to approach the suspects, they fled back into the mall, according to McGhee. That’s when the officers chased suspects through the mall.

According to McGhee, the officers were still chasing the suspect when he fired at least one shot in the officers’ direction. The bullet hit the ground in front of an officer, McGhee said.

Both of the officers returned fire, hitting the suspect, McGhee said. He added that the suspect was flown to the hospital in Charlotte, where he is in critical condition. The other two suspects are in custody, McGhee said.

Concord Mills mall is closed until further notice, police said. In a tweet, Concord police said there was no danger to the public.

“This incident frightened a lot of people at the mall and it is understandable that many people would have questions about what happened here today,” McGhee said. “The Concord Mills mall has policies and plans in place for terrible situations like this and I want to give credit to them for following the plans and helping in the early investigation.”

Police did not release the identities of either the officers or the suspects involved in the shooting. The State Bureau of Investigation is leading the case.

Chopper 9 Skyzoom could see a heavy police presence outside the mall around 1 pm Several Concord police cars could be seen on the property and on the surrounding roads.

Shopper Lisa Mash told Channel 9’s Hannah Goetz that she was on her way to pick up her kids after the shooting.

“I was on the phone but I heard a loud noise, but the Coach manager was good,” Mash said. “She said it’s gunshots, so she shut the gate.”

Mash was shopping at the Coach Outlet when she said the store manager told customers to hide in the back room because there had been a shooting.

She said that customers were allowed to leave one store at a time. Most of the people Goetz saw leaving were on their phones, some with their arms around each other.

Matthew Williams is an employee at the Ann Taylor Loft store. He was inside when the shooting happened.

“We were in my store dealing with some customers and me and my assistant were in the front, and we saw people running from the left end of the mall down,” Williams said.

“We actually went through one last week so we were able to look up and hide and pull all seven customers in the back with us,” Williams said.

He said he used that training to lock down the store and move his customers to safety.

“When you saw people running, it was kind of scary because people didn’t know if it was true or not,” Williams said. “I just took it like it was a life-threatening situation and just pulled everyone in for safety.”

Channel 9’s Allison Latos has covered safety and security concerns surrounding this mall for years. Concord Mills is private property so the mall manages and enforces security inside.

Earlier this year, Concord police installed license-plate reader cameras along the Concord Mills corridor to catch anyone starting trouble. The cameras constantly run license plate numbers through “hot lists” for stolen cars and missing or wanted people. So if a crime does occur, investigators can get license plate information to help them identify cars — and people involved — faster.

Last year, Simon Property Group — which owns the mall — announced a new chaperone program. From 3 pm until closing on Fridays and Saturdays, anyone under the age of 18 has to be with an adult 21 or older. That change came after years of violence we’ve covered, including:

Concord Mills has not been the only spot of tragic incidents for the Concord Police Department. We’ve covered several officer-involved shootings with Concord police lately.

“We have a community that wants to make sure the police are well trained and responsible. And we also have police officers that can’t hesitate when faced with the threat of death or imminent danger,” Vaneekhoven said.

Now, the SBI will begin the complicated process of investigating Wednesday’s shooting. When the agents are finished, the district attorney will decide whether to deem this shooting justified. But that won’t be Vaneekhoven’s decision — she’s retiring after Wednesday, so Wednesday’s case will be in the hands of the new DA, Ashlie Shanley.

This is a developing story. Check back for details.