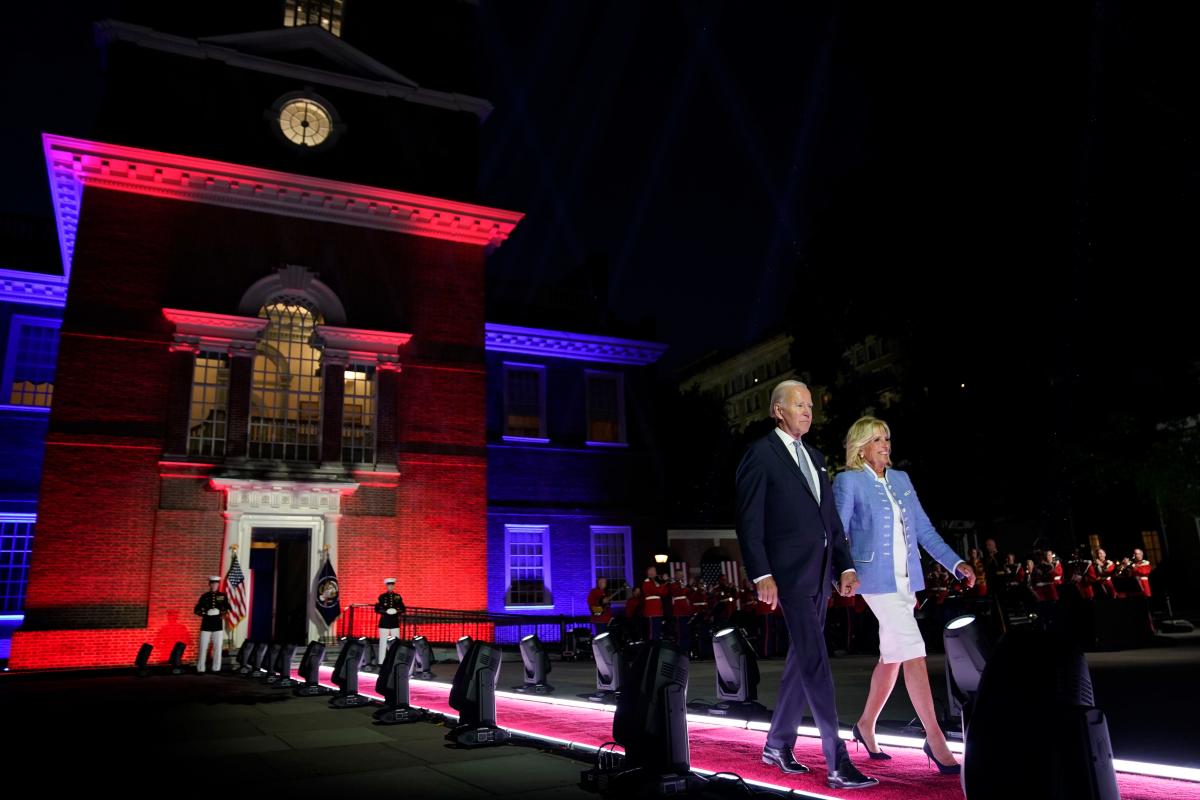 WASHINGTON–Propelled by a series of recent political wins, President Joe Biden is revving his offense and pushing a message of democracy in peril.

But questions are mounting in battleground states about whether the president’s somber tone Thursday night in Pennsylvania and stark warnings about the state of the union will have any impact – or even if it’s necessary.

Several analysts say the best winning campaign argument Democrats have two months out from the midterms is that they are the party of abortion rights. The Dobbs decision that overturned Roe v. Wade in June has been the biggest motivator for voters and has cross-party appeal, according to multiple polls and primary results.

“Roe is more motivating for women than having a woman on the ballot in 2016 or 2020. It’s bringing in cross-party party voters and new voters and swing independents,” according to Grassroots Midwest CEO Adrian Hemond.

And yet, the president this week has focused less on that winning message and more on his predecessor and those who subscribe to the Make America Great Again movement.

He later called on all Americans to be more committed to saving democracy. “For a long time, we’ve reassured ourselves that American democracy is guaranteed, but it is not. We have to defend it, protect it, stand up for it. Each and every one of us.”

The president’s message Thursday night is one that Michigan voters could have lived without.

Republicans are unlikely to listen, and Democrats and independents are more motivated by Roe, Hemond said.

“Democrats have a live issue that’s working,” he said, referring to abortion rights. “I don’t understand why they’re talking about anything else.”

The timing of it is also puzzling to analysts in battleground states.

His speech began at 8 pm in Philadelphia, the same time as kickoff in a Penn State football game and an hour after Pitt football players took the field. Voters in Pennsylvania, a state with diehard football fans, likely cared more about offense on the field than Biden’s offense.

“Maybe the president thinks he can convince more Americans how fragile our democracy is – which is a serious and important subject – but the timing doesn’t make much sense,” Hemond said. “A Thursday night, when college football is starting in a state that lives for football, it’s not at all clear what the upshot is.”

More than a dozen other college football games across the country were also being played as the president spoke.

With any big prime-time, presidential speech, there’s always a downside risk that it could do more harm than good or be met with a lackluster response, he said.

“Is the juice worth the squeeze?” Hemond said.

Some analysts say no, and some cautioned that the president could face a backlash from voters.

President risks backlash by taking on voters, not just Trump

By taking aim at MAGA Republicans, Biden is following a path that has not worked well for other Democrats in battleground states.

Biden is already facing calls from House Minority Leader Kevin McCarthy to apologize for invoking fascism when describing Trump and his supporters.

“President Biden has chosen to divide, demean and disparage his fellow Americans. Why? Simply because they disagree with his policies. That’s not leadership,” McCarthy said.

It’s one thing for a president to criticize a candidate, it’s another for him to criticize voters, according to Charles Franklin, director of the Marquette Law School Poll in Wisconsin.

“It can be damaging,” he said. “When you say something negative about voters, that’s harder to overcome.”

With midterms nine weeks away, Biden’s message is likely to be received by Republicans as another partisan attack on Trump, according to Franklin.

Trump, meanwhile, has a knack for turning criticism into marketing opportunities.

For example, when Biden labeled some of the former president’s allies as “ultra MAGA,” Trump turned the slogan into merchandise. He has also been fundraising off of the search at Mar-a-Lago that turned up numerous classified and top-secret documents.

Why Biden gave the speech

The president’s message is aimed at three groups, according to Fred Hicks, a political strategist in Georgia.

They include dissatisfied Democrats who contribute to Biden’s low approval numbers, Bush-Reagan Republicans who put country before party and independents who have been breaking in favor of Democrats.

Biden is unlikely to move Trump Republicans with his speech, but Hicks said the president’s message could further inspire Republicans who voted for Bush and Reagan to stay home in November.

Franklin will be listening closely to Biden in Wisconsin next week to see if he repeats some of the same themes as Thursday in a state where only 1% separates the voter registration between Democrats and Republicans. There aren’t many independents there, but that also means it doesn’t take many independents to swing an election.

There’s a somewhat growing contingent in the Midwest, where about a quarter or more of Republicans “are not on the Trump train,” Franklin said. It’s a sizeable minority that is growing weary of Trumpism, but they are still “incredibly hard to move” towards Democrats.

Can Biden move the political needle?

What if “we the people” are too apathetic?, some analysts questioned.

Although there is some openness among Ohio Republicans to alternatives to Trump, it’s still a reliably red state the former president won twice by 8 points and where Trump-backed JD Vance has a narrow lead in a US Senate race that could swing control of Congress to Republicans, according to Christopher Devine, associate professor of political science at the University of Dayton.

“There are probably 20% to 25% of Ohio Republicans who are open to the message of threats of Trumpism, but this speech may be aimed more at Democrats who need to be further mobilized to vote in November,” he said.

As Biden spoke in Pennsylvania – the native state he won after days of counting – the gubernatorial midterm election was broiling between Democratic Attorney General Josh Shapiro and Republican state Sen. Doug Mastriano, who has been tied to Trump’s slate of false electors. There’s also a critical US Senate race there between Democratic Lt. Gov. John Fetterman and Trump-backed Republican Dr. Mehmet Oz that could determine the control of Congress.

“Democracy cannot survive when one side believes there are only two outcomes to an election: either they win or they were cheated,” Biden said Thursday night.

In his words, Biden was writing for history where he stands and what he believes in even as he worked to remind voters that America is an idea – an idea that became a beacon to the world.

“Presidents are acutely aware of their legacy,” said Terry Madonna, a veteran political analyst in Pennsylvania. “Who we are as Americans matter a great deal to Biden, who built his first campaign on the soul of the nation.”

His speech was also more of a campaign speech than one that addressed the main issue for all voters, which is the cost of living, according to just about every poll.

“He’s trying to win a battle on principle, and he saw a moment here to go on the attack,” said Sean Freeder, assistant professor of political science at the University of North Florida. “He might have been able to unify his base more by talking about student loans and Roe.”

When Freeder first heard Biden was going to give a speech about MAGA Republicans, he thought it was the wrong strategy.

“When you’re on an upward trend, you don’t need to change direction. Going after Trump and his supporters is a bit of a risk,” he said.

Candy Woodall is a Congress reporter for USA TODAY. She can be reached at cwoodall@usatoday.com or on Twitter at @candynotcandace.