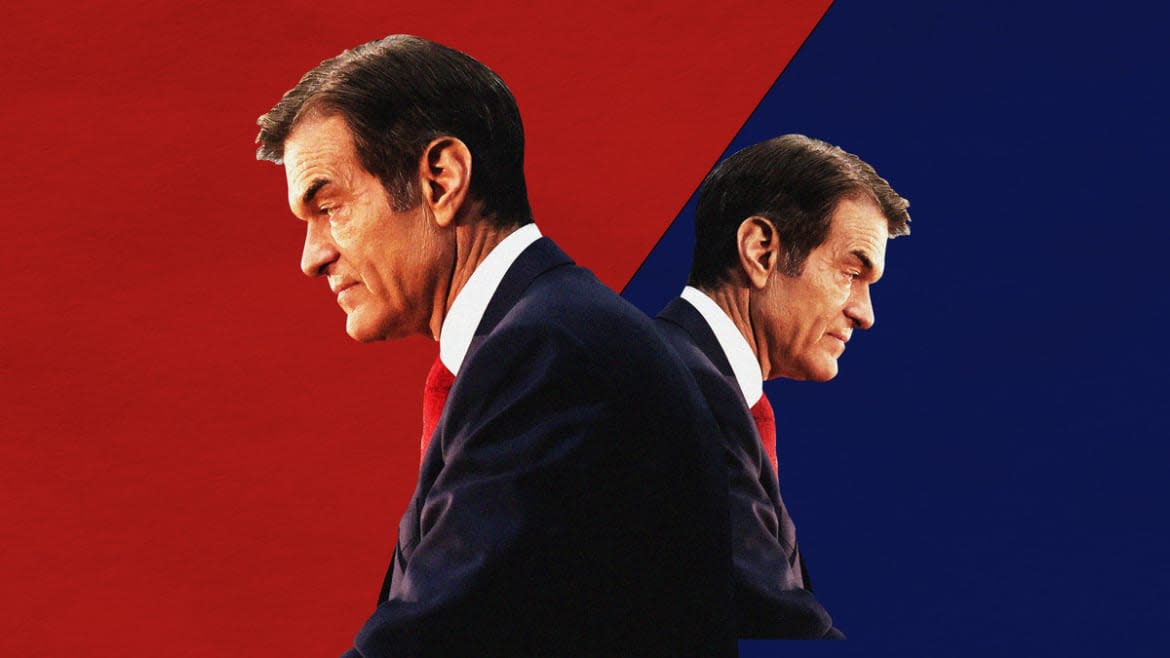 TV doctor turned Republican senatorial candidate Mehmet Oz has been tough to pin down on abortion.

But now, The Daily Beast has obtained audio from a campaign event this May where Oz staked out his most extreme position yet, telling voters he believes abortion at any stage of development is “still murder,” including from the moment of conception.

“I do believe life starts at conception, and I’ve said that multiple times,” Oz said during the event, the tele-town hall held a week before the Republican primary.

“If life starts at conception,” Oz added, “why do you care what age the heart starts beating at? It’s, you know, it’s still murder, if you were to terminate a child whether their heart’s beating or not.”

He was answering an attendee who wondered how Oz could square his current anti-abortion stance with his statements from 2019, specifically that “the heart’s not beating” six weeks into a pregnancy.

The one-time surgeon explained that, at the time of the 2019 interview, he had been “concerned” about making sure anti-abortion laws could be enforced.

“My mother-in-law wrote a lot of the original pro-life literature in Montgomery County,” Oz told the conservative audience. “My argument in that radio interview was as a doctor, a heart starts beating at around nine weeks. So I was concerned that if legislators picked a timeframe that’s not medically accurate, it would invalidate the law.”

Does Dr. Oz’s Team Hate Him or Are They Just Bad at Their Jobs?

Oz did in fact say something to that effect in the 2019 Breakfast Club interview. “If you’re going to define life by a beating heart,” he said, “then make it a beating heart, not little electrical exchanges in the cell that no one would hear or think about as a heart.”

The context in that 2019 interview, however, was that Oz was politically pro-choice.

He was “really worried,” Oz said during that interview, about the harmful consequences for women’s health if Roe were overturned.

He even took a shot at people who believe life begins at conception—as Oz now says he does.

“Just being logical about it,” Oz said then, “if you think that the moment of conception you’ve got a life, then why would you even wait six weeks? Right, then an in vitro fertilized egg is still a life.”

It’s not clear where Oz stands on abortion laws that might effectively also ban in vitro fertilization. According to his most recent financial disclosure, Oz and his wife hold between $1.5 million and $6 million of shares in Prelude Fertility, part of the largest in vitro fertility network in the United States—which is currently looking for a buyer.

Abortion rights are on the ballot this year, and Democrats see the issue playing to their favor. They’re betting bigas polls in the wake of the Supreme Court’s Dobbs decision suggest an energized pro-choice electorate could make the difference in key midterm races. That includes Pennsylvaniawhich The New York Times has called the “biggest abortion battleground” of the midterms, and where support for abortion access is at an all-time high.

None of that is great news for Oz.

The former daytime TV star’s squishiness on the issue has been a weak spot throughout his campaign—including during the Republican primary, where he scrambled to sell the MAGA based on his conservative bona fides. And his remarks equating early-stage abortion to “murder,” made weeks ahead of that primary, could complicate his ongoing efforts to appeal to the swing state’s critical suburban voting block.

A former senior staffer in the Pennsylvania governor’s office told The Daily Beast that while hardline anti-abortion rhetoric carried Oz through the primary, it’s “outside of where most Pennsylvania voters are,” and could be a strategic mistake in the general election.

“In the current environment, that is such a massive gaffe, because it speaks directly to people’s biggest concerns about voting for an anti-abortion Republican like Dr. Oz,” the former staffer said. “A lot of voters are very concerned—even if they are uncomfortable with abortion themselves—that there are gonna be these hardline bans that prevent their own family and friends from getting the care they need.”

This person added to characterize a woman getting an abortion in the early stages of a pregnancy as murder is “so outside of where most Pennsylvania voters are.”

“Especially the voters Oz absolutely has to win,” this former staffer continued, “like moderates and independents, suburban voters, voters in the middle of the ideology bracket in Pennsylvania.”

“Dr. Oz is wildly out of touch with the people of Pennsylvania who support abortion rights by 9-10. Dr. Oz wants to let extremists ban abortion with no exceptions in cases of rape or incest—in PA and across the country,” Emilia Rowland, a Fetterman campaign spokesperson, told The Daily Beast. “If he’s elected, he will be a rubber stamp to criminalize abortion, appoint justices even more radical than today’s, and send doctors, nurses, and patients to jail.”

Fetterman also had said Oz wants to ban abortions “even in the cases of rape or incest” last week, a claim Fetterman did not cite and which appears to be false. While Oz did applaud the repeal of Roea move that opened the door to the kinds of blanket bans Fetterman is referencing, Oz has maintained support for what he calls the three “usual” exceptions: rape, incest, and the health of the mother.

It might not be so surprising that Oz finds himself in a hall of mirrors on this particular issue. At one point in the 2019 Breakfast Club interview, he offered a cynical critique on the politics of abortion rights.

“There’s so much we gotta do already to take care of each other. To start picking fights on this—I always wonder about it,” he said. “It happens periodically. There are these moral issues that almost on purpose are inflamed.”

The Oz campaign did not respond to a request for comment.