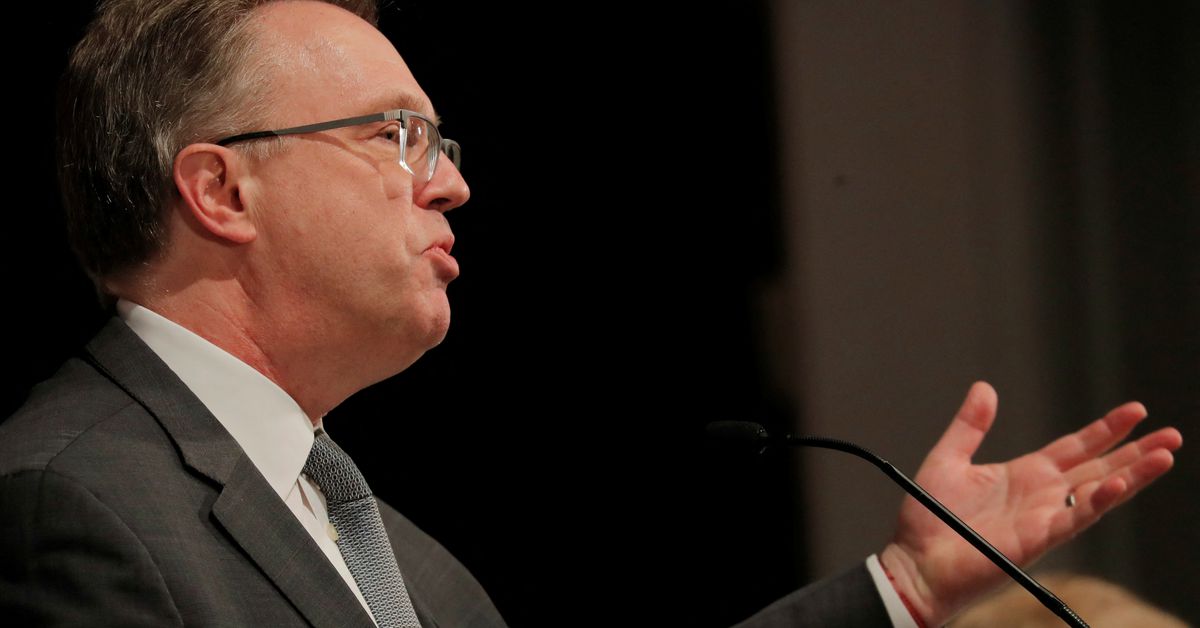 John C. Williams, president and CEO of the Federal Reserve Bank of New York speaks to the Economic Club of New York in the Manhattan borough of New York, US, March 6, 2019. REUTERS/Lucas Jackson

Aug 30 (Reuters) – US Federal Reserve officials on Tuesday reiterated their support for further interest-rate hikes to quell inflation, with the influential chief of the New York Fed saying the central bank will likely need to get its policy rate “somewhat above” 3.5% and keep it there through the end of 2023.

“I see us needing to kind of hold a policy stance – pushing inflation down, bringing demand and supply into alignment – it’s going to take longer, will continue through next year,” New York Fed chief John Williams told the Wall Street Journal. “Based on what I’m seeing in the inflation data, and what I’m seeing in the economy, it’s going to take some time before I would expect to see downward adjustments of rates.”

The Fed in March embarked on what’s become the sharpest round of rate hikes since the 1980s, and Fed Chair Jerome Powell last week made clear he and fellow monetary policymakers are prepared to raise borrowing costs as high as needed to restrict growth and reduce inflation that’s currently running at more than three times the Fed’s 2% target.

Doing so, he said, will likely mean a softer labor market and pain for households and businesses; but allowing inflation to remain high would cause even worse damage, he said. read more

Williams, who as vice chair of the Fed’s rate-setting panel plays a key role steering monetary policy, said that the central bank’s decision on whether to deliver a third straight 75-basis-point rate hike next month or a smaller half-point hike will depend on the incoming data, which includes Friday’s monthly jobs report and the consumer price index reading just days before the Sept. 20-21 meeting.

But September’s decision will also, Williams said, depend on policymakers’ views of where they think interest rates will need to be by the end of the year.

“If based on the data it’s clear that we need to get interest rates significantly higher by the end of the year, then obviously that informs a decision at any given meeting,” Williams said. “We’re going to need to have restrictive policy for some time – this is not something that we’re going to do for a very short period of time and then change course; it’s really more about getting policies to the right place to get inflation down and keeping it in this position” to achieve the Fed’s 2% inflation goal.

In June, the last time the central bank published a summary of policymakers’ rate-path expectations, US central bankers saw rates rising to 3.4% by year end.

Financial markets are pricing in a steeper increase. Futures contracts tied to the Fed policy reflect trader bets that rates will rise 1.5 percentage points further by year end. There are three more policy-setting meetings this year, including next month’s.

“I don’t think we are done tightening. Inflation remains too high,” Atlanta Fed President Raphael Bostic wrote in an essay published Tuesday on the regional bank’s website. “That said, incoming data – if they clearly show that inflation has begun slowing – might give us reason to dial back… We will have to see how those data come in.”

Inflation by the Fed’s preferred measure slowed to 6.3% in July, down from 6.8% in June, but price pressures remain “stubbornly widespread,” Bostic said.

Bostic called the overall picture “fuzzy,” and said that while focused on the path of inflation, he was also sensitive that moving too aggressively to raise interest rates also carried risks.

“Moving either too aggressively or too timidly has downsides,” Bostic wrote, with entrenched higher inflation looming if the Fed does not squeeze it from the economy, and lost growth and higher unemployment the outcome of “severe policy tightening.”

To Richmond Fed President Thomas Barkin, it’s clear the Fed needs to raise interest rates, although exactly how much next month will hinge on the upcoming jobs and inflation reports. “I’m not going to prejudge it,” Barkin told Yahoo Finance, adding that the Fed does need to get rates “into restrictive territory” to bring inflation down.

(This story refiles to fix typographical error in last paragraph)