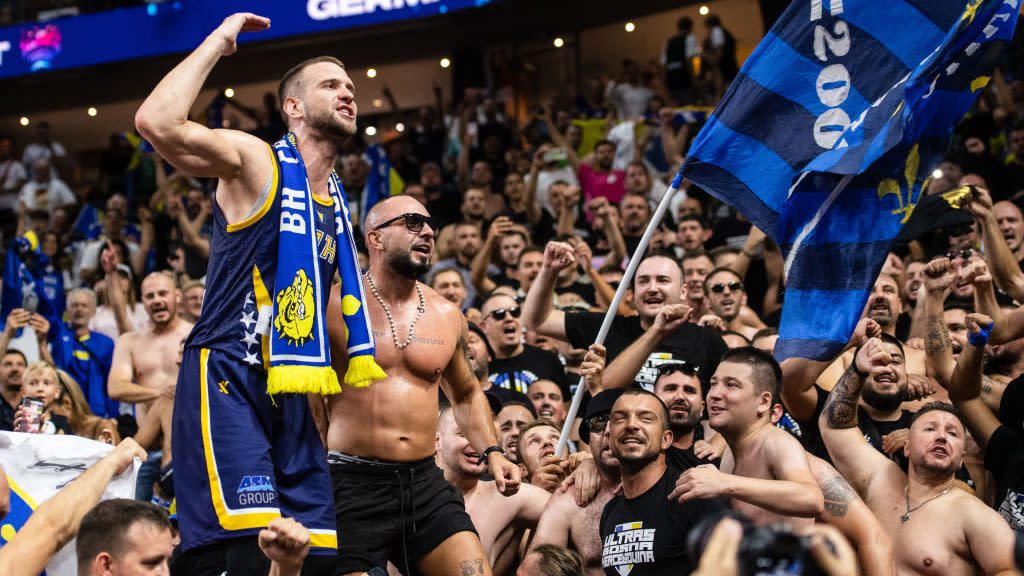 COLOGNE, Germany (AP) — Lithuania unsuccessfully protested its double-overtime loss to Germany at the EuroBasket tournament Sunday, arguing that referees did not award it a free throw following a technical foul in regulation.

That means it’s a German win – and a huge one for the hosts. Franz Wagner scored 32 points, Dennis Schroder added 25 and Germany prevailed 109-107 in a game that was tight throughout, with neither team ever leading by more than nine points.

“We are not happy,” Lithuania coach Kazys Maksvytis said.

The Germans were thrilled, since they’re now certain to advance out of group stage and reach the tournament’s knockout round.

According to FIBA, Germany coach Gordie Herbert was called for a technical with 1:26 left in the third quarter, after a personal foul was whistled against his team. Jonas Valanciunas shot two free throws for Lithuania for the personal foul, but no free throw for the technical was awarded.

Herbert said he was told by one of the referees with 7 seconds left in regulation that there was “a situation” regarding the technical and what should have happened.

“That was the first time I heard about it,” Herbert said.

FIBA said the protest was “inadmissible as the protest reasons were delivered outside the designated time of 60 minutes after the game.” But FIBA ​​added that the protest, even if filed in a timely manner, would have been rejected “as the reason presented is not one of the reasons under which a protest can be filed.”

Arnas Butkevicius’ 3-pointer from the left wing for Lithuania – the potential game-winner – bounced off the rim as the clock ran out in the second extra session.

Lithuania’s three losses have been by seven, four and two points.

“It was a tough game,” Valanciunas said. “They played well. I thought we responded for most of the time. … Congrats to them.”

Valanciunas scored the final four points of regulation as Lithuania rallied from down 89-85 in the final 42 seconds. Schroder missed a stepback jumper at the buzzer of the fourth, and Wagner missed one at the end of the first overtime.

But in the second OT, the Germans scored the first five points and never trailed. Valanciunas was subbed out with 2:29 left, Lo made a 3-pointer 17 seconds later for a 106-102 lead and Germany held on.

“To come out on top, after all of that, I think it’s definitely a sign of our character and togetherness as a team,” Lo said.

Also at Cologne, Bosnia and Herzegovina (2-1) surprised Luka Doncic and defending EuroBasket winner Slovenia (2-1) behind 23 points from John Roberson and 22 from Dzanan Musa.

Miralem Halilovic scored 13, while Jusuf Nurkic and Edin Atic each had 12 for the winners.

Guerschon Yabusele scored 17 points and France (2-1) wasted most of a 15-point lead before hanging on late to defeat Hungary (1-2).

Adam Hanga’s 3-pointer with 1:04 left got Hungary within 74-72. Hungary got a stop on the next France possession and had a shot at what would have been its first lead, but David Vojvoda’s 3-point try bounced off the rim with 23 seconds remaining.

At Tbilisi, Georgia, Manu Lecomte scored 20 points and Belgium ended the game on a 12-0 run to surprise Spain.

Pierre-Antoine Gillet scored 14 points for Belgium (2-1), which got 11 from Retin Obasohan and 10 from Ismael Bako.

Willy Hernangomez scored 18 for Spain (2-1), while Juancho Hernangomez and Lorenzo Brown each had 11.

Aleksandar Vezenkov led all scorers with 26 for Bulgaria, which led 75-73 in the fourth before missing eight of its last 10 shots. Andrey Ivanov finished with 17 and Chavdar Kostov added 10 for Bulgaria, which tried 64 shots in the game – 40 of them from 3-point range.

The host nation in Group A rallied from an early 10-point deficit and handed Turkey (2-1) its first loss, though there was even more controversy following the game.

Turkey pains that one of its players – local media said it was Furkan Korkmaz – got into an altercation in the locker room area following the game. It was unclear who else was involved in the incident.

“We will watch the cameras,” Demir said. “This kind of thing, unfortunately, is a big disappointment. We are here to play basketball. … On the court, Georgia won the game. We congratulate them. It’s no problem. We lost in two overtimes. Does not matter.”

Korkmaz and Sanadze were both ejected.

Alexander Mamukelashvili had 20 points and 12 rebounds for Georgia (1-2), while Thaddus McFadden scored 17, Rati Andronikashvili and Giorgi Shermadini each scored 15 and Sanadze added 13.

Turkey’s loss created a four-way tie with Montenegro, Spain and Belgium joining it atop Group A. The top four teams in each group advance to the knockout stage.

Check out more from EuroBasket

Germany wins 2OT thriller but not until Lithuania protest denied at EuroBasket originally appeared on NBCSports.com