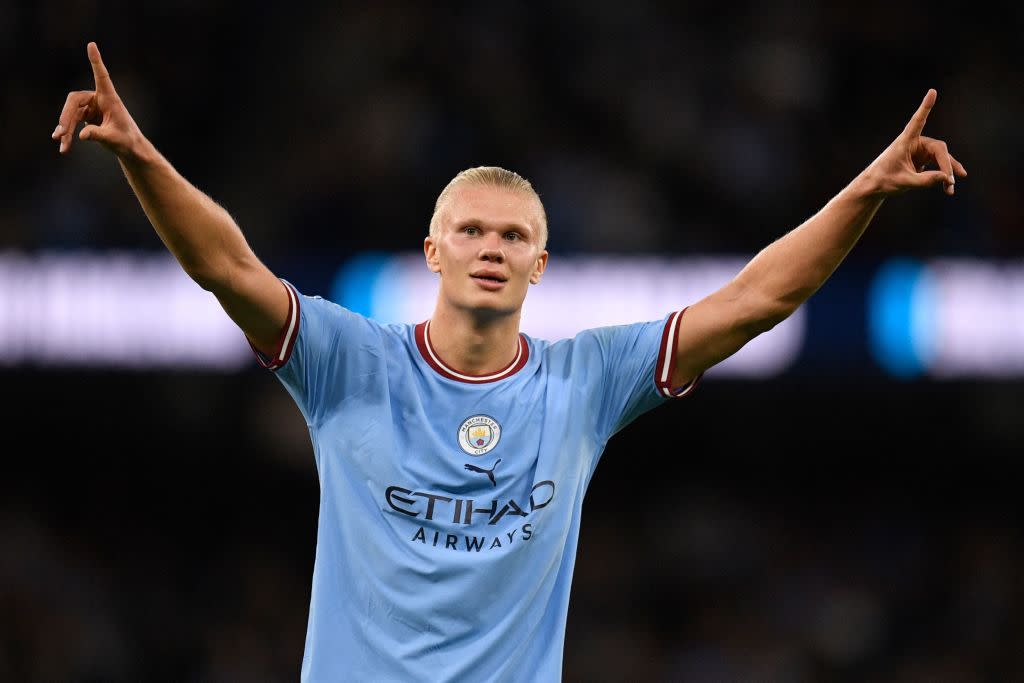 Manchester City turned on the class to hammer Nottingham Forest 6-0 as an Erling Haaland hat trick set them on their way.

[ MORE: How to watch Premier League in USA ]

Haaland scored a perfect hat trick in the opening 38 minutes (his second hat trick in the last four days) to set a new Premier League record for the most goals scored by a single player in their first five games in the competition.

Joao Cancelo scored a beauty and then Julian Alvarez scored his first two Premier League goals in the second half to add deserved gloss to the scoreline.

City have now gained 13 points from a possible 15 to start the season and remain unbeaten, while Forest have lost three of their first five games and have four points.

What we learned from Manchester City vs Nottingham Forest

Haaland is not human: We all knew he was going to be brilliant and, on paper, he was exactly the striker City needed to finish off the boatload of chances they create every game. But nobody thought he would be this good, right? Back-to-back hat tricks is insane and so is Haaland. He has set a new PL record with nine goals in his first five games and he could have scored more. He is only 22 years old and he is set to play with Phil Foden for the next five years (at least). That is a scary thought for the rest of the Premier League. Yes, there will be tougher tests than Crystal Palace and Forest, but Haaland is doing exactly what is being asked of him.

Forest continues to struggle with fluidity: With so many new players coming in and out of the team, it was always going to be tough for Forest to find their rhythm early in the season. But even away at Man City, this was bleak. At a period in the first half they had just three percent of possession over a five minute period. Three. Steve Cooper knows his team won’t be judged by their performances in games like this. But the face that Forest were so far off it will concern him.

Alvarez is quietly settling in very well: He scored two beauties for his first goals in the Premier League and Alvarez is settling in very well. Given all of the fuss around Haaland, the Argentine has been allowed to just do his thing and he is doing it well. After jumping off the bench to have a big impact in recent games he got his first start and he showed Guardiola that he is ready to get plenty more on the right side of the attack, as he cut inside to link up so well with Haaland.

Stars of the show

Erling Haaland: What else can we say? Perfect hat trick inside 38 minutes. Back-to-back PL hat tricks and nine goals in his first five games. This dude is not human. Simple.

João Cancelo: Scored a stunning goal in the second half and clipped in two sensational balls which led to Haaland’s goals. Loves a cross with the outside of his right boot from the left. Majestic player.

Julian Alvarez: Two goals with clever running and superb movement throughout. He looks like a great partner in crime for Haaland.

City were sluggish defensively and found themselves 2-0 down against Palace but then their quality kicked in and they stormed to a 4-2 win. Pep Guardiola won’t be delighted with the defensive mistakes early in the season (they’ve conceded five in their last two games) but City have so much firepower that they can afford to give teams a two-goal lead and still get something from games. That isn’t their gameplan, but when you have Kevin de Bruyne and Phil Foden feeding the monster that is Erling Haaland, City are unstoppable when they’re in full flow.

Forest continue to sign players galore and their squad is looking very strong. They still lack a little fluidity in the final third, but Steve Cooper’s side look at home in the Premier League and they’re pushing teams all the way.

In-form players to keep an eye on

City’s main man was Erling Haaland at the weekend, but the role De Bruyne, Foden and Bernardo Silva played in the comeback win was pivotal, while Julian Alvarez and Ilkay Gundogan both had a big impact off the bench.

Dean Henderson has been a revelation in goal, saving two penalty kicks in his first four games for Forest. Brennan Johnson has been dangerous in attack, while Joe Worrall continues to be an inspirational leader at center back. Adding Brazilian international full back Renan Lodi from Atletico Madrid is another big coup.

Nathan Ake and Jack Grealish are battling back to full fitness, while Kalvin Phillips and Luke Mbete are a little further behind in their comeback. Aymeric Laporte is still out for another month or so with a knee injury. Guardiola brings in Alvarez up top. That said, Pep doesn’t have a lot of options in defense which will concern him ahead of the Champions League group stage kicking off and the huge volume of games before the World Cup.

Moussa Niakhate and Omar Richards remain out, while Orel Mangala is still out. Forest have so many new signings and Remo Freuler and Renan Lodi both start this one.