Harry and Meghan’s children are not listed as a Prince and Princess on the updated order of succession published by Buckingham Palace following the death of the Queen.

As grandchildren of the reigning Monarch, the children of the Duke and Duchess of Sussex are entitled to the titles. But on the updated order of succession under King Charles III, Archie Mountbatten-Windsor, three, and sister Lilibet, one, received the titles ‘Master’ and ‘Miss’.

During the explosive Oprah Winfrey interview, Meghan claimed officials had denied Archie the title of prince and denied him 24/7 security before suggesting the decision was due to him being mixed race.

The Sussexes indicated in the interview that they had expected Archie would become a prince but that they had been told that protocols would be changed in line with Charles’s wish for a slimmed-down monarchy.

The Sussexes’ friend and preferred journalist Omid Scobie wrote on Twitter: ‘As son of the King, Harry’s children have the right to become HRH Prince Archie and HRH Princess Lilibet. Right now, however, the two are listed with their original stylings.’ 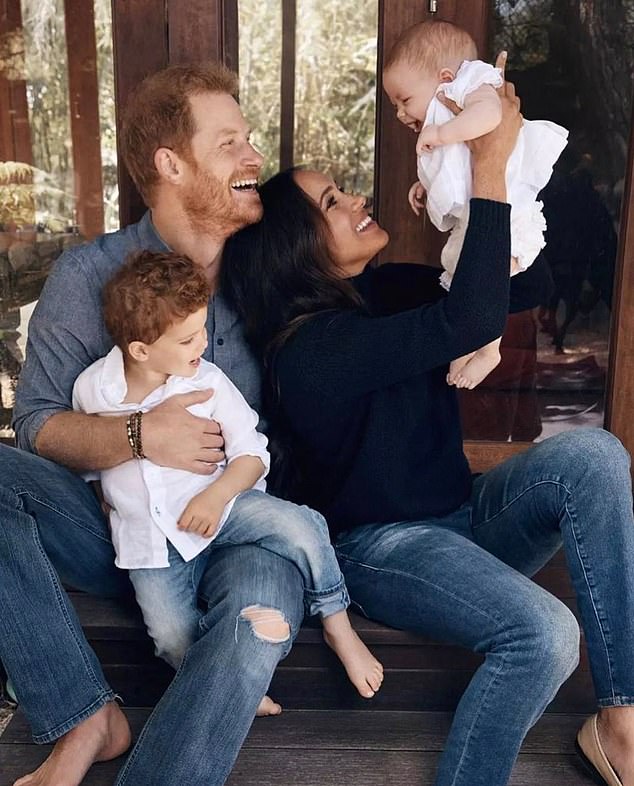 The first picture of the Duke and Duchess of Sussex’s daughter Lilibet released in a Christmas card on December 23, 2021

The rules set out by King George V in 1917 mean Archie and Lili – as the children of a son of a sovereign – also now have an HRH style if they choose to use it.

The King’s spokesman said the monarch had announced William and Kate’s titles as the Prince and Princess of Wales, and expressed his love for Harry and Meghan in his address to the nation on Friday.

‘While the website was updated for the Waleses, clearly updating love on a website doesn’t quite work so we’ve not quite done that but clearly he does love them. We will be working through updating the website as and when we get information,’ he said on Saturday.

The question of titles was first raised publicly by Meghan in her 2021 interview with Oprah Winfrey.

She said that when she was pregnant with Archie: ‘They were saying they didn’t want him to be a prince or a princess – not knowing what the gender would be – which would be different from protocol.’

Meghan described her ‘pain’ as she claimed officials had denied Archie the title of prince and accused Buckingham Palace of failing to protect him by denying him 24/7 security.

When asked if it was ‘important’ for Meghan that Archie be called a prince, she said she doesn’t have any attachment to the ‘grandeur’ of official titles.

But she said it was about ‘the idea of ​​our son not being safe, and also the idea of ​​the first member of color in this family not being titled in the same way that other grandchildren would be.’ 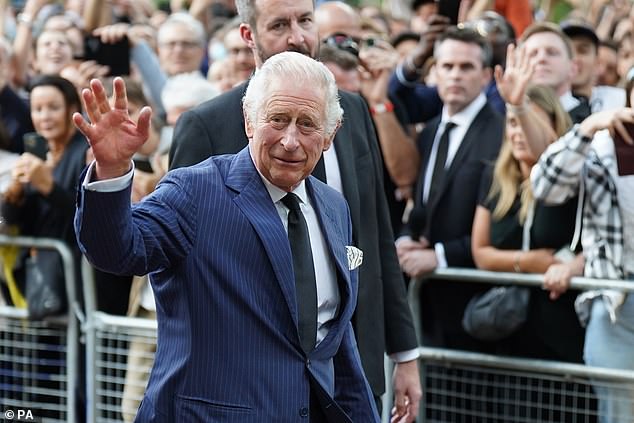 King Charles III greets members of the public outside Clarence House, London, after he was formally proclaimed monarch by the Privy Council 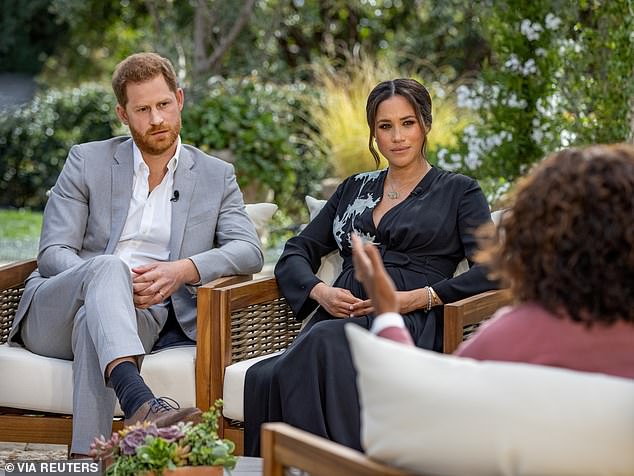 During the explosive Oprah Winfrey interview, Meghan described her ‘pain’ that officials had denied Archie the title of prince and accused Buckingham Palace of failing to protect him by denying him 24/7 security

In 2021, it was suggested that Charles – in a bid to limit the number of key royals – intended, when he became monarch, to prevent Archie becoming a prince.

When Archie was born seventh in line to the throne in May 2019, he was too far down the line of succession.

Although he was a great-grandchild of the monarch, he was not a first-born son of a future king, so he was not automatically a prince.

He could have previously used the courtesy title Earl of Dumbarton, or been Lord Archie Mountbatten-Windsor.

But Buckingham Palace said the duke and duchess made a personal decision that he should be plain Master Archie Mountbatten-Windsor instead.

The Sussexes stopped using their own HRH styles after stepping down as senior working royals for a life in Los Angeles, and there were later calls for their duke and duchess titles to be removed.

What is the George V convention?

In 1917, the Queen’s grandfather issued new letters patent that limited the number of royal family members with an HRH title.

These stated that ‘the children of any Sovereign of these Realms and the children of the sons of any such Sovereign and the eldest living son of the eldest son of the Prince of Wales shall have and at all times hold and enjoy the style, title or attribute of Royal Highness with their titular dignity of Prince or Princess prefixed to their respective Christian names or with their other titles of honor’. 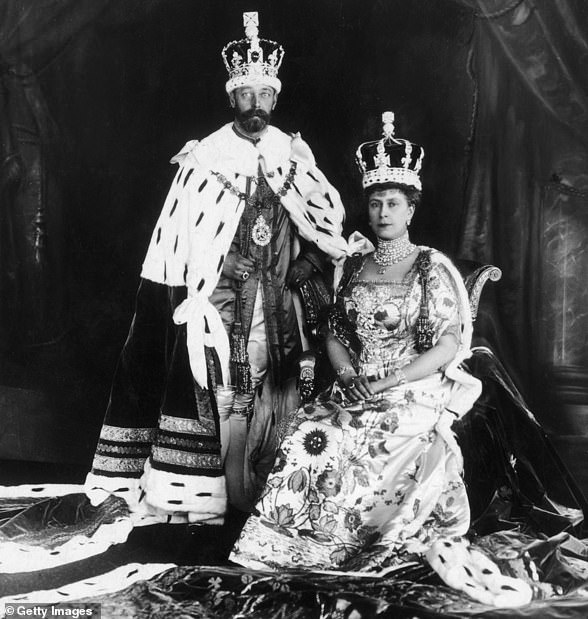 In 1917, the Queen’s grandfather issued new letters patent that limited the number of royal family members with an HRH title

This means that when Prince Charles became King, his grandchildren – including Archie – automatically became princes or princesses.

It was also decreed that ‘grandchildren of the sons of any such Sovereign in the direct male line … shall have and enjoy in all occasions the style and title enjoyed by the children of Dukes of these Our Realms’ (ie, Lord or Lady before their Christian name).’

In addition the letters stated ‘save as aforesaid the style title or attribute of Royal Highness, Highness or Serene Highness and the titular dignity of Prince or Princess shall not henceforth be assumed or borne by any descendant of any Sovereign of these Realms.