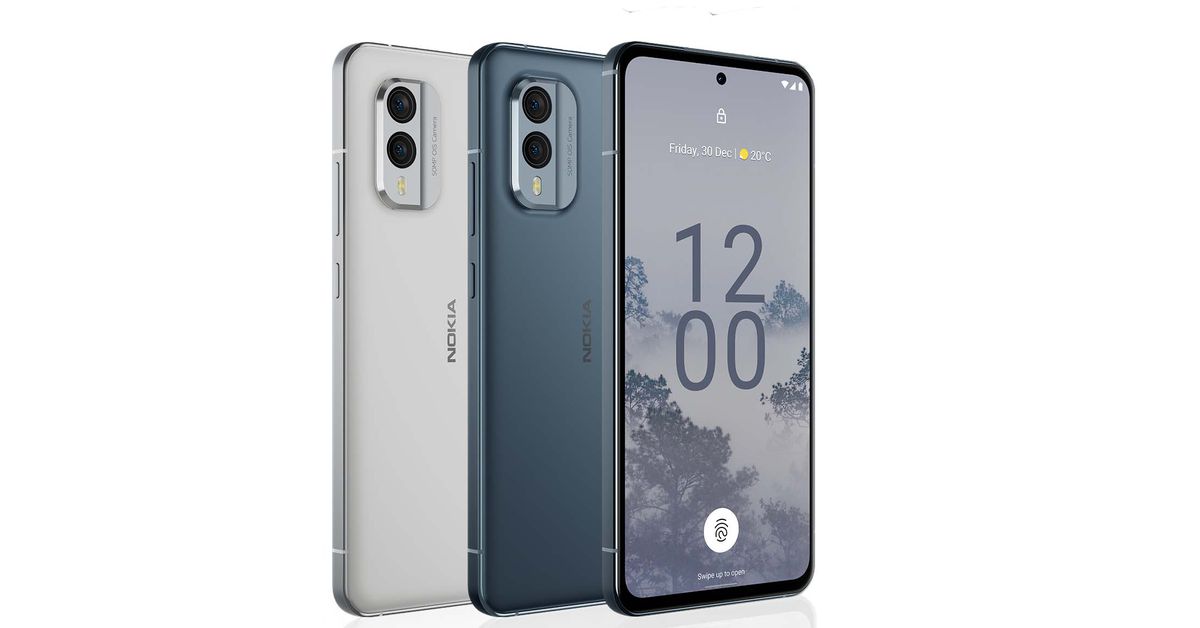 HMD is announcing a trio of new smartphones today — the Nokia G60 5G, C31, and X30 5G — and says the X30 5G is the “most eco-friendly smartphone” it’s ever produced. The three phones are focused on Europe, and are distinct from the range of devices that HMD sells in the US.

As well as being sold outright, the Nokia X30 5G will be one of a handful of phones available via HMD’s new subscription service called “Circular,” where customers can subscribe to get a handset for a monthly fee and receive incentives to use a phone for as long as possible. Circular will initially be available in the UK and Germany, but HMD says it’s planning a global launch “in the coming months.”

HMD justifies its eco-friendly claims about the Nokia X30 5G with the amount of recycled materials used in the construction of the handset. It features a 100 percent recycled aluminum frame and a back panel that’s made from 65 percent recycled plastic, and ships in a box made from 70 percent recycled paper. The company also says it will support it with three years of OS upgrades and monthly security updates, and offers a three-year warranty as standard.

Attempting to produce a more eco-friendly smartphone is a laudable initiative, but HMD’s efforts trail behind those of sustainable smartphone specialists Fairphone. Although its most recent device, the Fairphone 4, doesn’t use recycled aluminum, its back cover is made from 100 percent recycled plastic, its solder is made from 100 percent recycled tin, and it uses fair trade gold and conflict-free tungsten. Fairphone aims to support the phone with five years of security and software updates rather than three, and also designs its devices to be as easy to repair by the end user as possible, with removable batteries that can be simply swapped out when they degrade and other components that are removable with simple screws. None of these are featured on HMD’s Nokia X30 5G.

When I put these questions to HMD, its global head of product marketing Adam Ferguson told me that the company decided to initially focus on plastic and aluminum because there is such a comparatively large amount of the materials that go into a smartphone. “Our main focus is tackling what we see as the two largest elements that we can make the biggest difference on [and which] will have the biggest impact on e-waste,” Ferguson says, but adds that HMD’s “next step” will be looking at other areas where it can improve the sustainability of its devices.

Aside from its sustainability credentials, the Nokia X30 5G is a fairly typical midrange device. It’s powered by a Qualcomm Snapdragon 695 processor with a choice of either 6 or 8GB of RAM and 128 or 256GB of storage, and has a 6.43-inch 1080p OLED display with a 90Hz refresh rate. Around back there’s a 50-megapixel main camera with a 13-megapixel ultrawide, and there’s a 16-megapixel selfie camera. The phone will be available later this month with prices starting at £399 (€529).

Alternatively, the X30 5G will be available via HMD’s new subscription service Circular, where it will cost £25 a month with a £30 start-up fee in the UK. The idea is that, rather than buying a phone outright, customers can rent their handset for a minimum of three months on a rolling subscription contract. The catch is that they then return the device to be recycled or reused at the end of the subscription. HMD also hopes to encourage customers to use devices longer by offering credits that can be invested in charitable causes.

Alongside the Nokia X30 5G, HMD is announcing two additional smartphones today. First there’s the Nokia G60 5G, a £249 (€319) handset that’s also powered by a Qualcomm Snapdragon 695 processor and includes a three-year warranty alongside three years of security and Android updates. However, it starts with just 4GB of RAM and 64GB of expandable storage, and has an LCD display instead of OLED. The display is 6.58 inches, with a refresh rate of 120Hz. Around back it has a trio of cameras: a 50-megapixel main camera, a 5-megapixel ultrawide, and a 2-megapixel depth sensor. It’s available starting today in the UK, and will also be available on Circular for £12.50 a month with a £30 set-up fee.

Finally, there’s the Nokia C31, a €129 handset that HMD says can offer three days of battery life thanks to its 5,050mAh battery. It’s powered by a Unisoc 9863A1 processor, with a choice of 3 or 4GB of RAM and between 32 and 128GB of expandable storage. Its screen is 6.7 inches but is only 720p, and its trio of rear cameras is led by a 13-megapixel main sensor. HMD is promising to support it with two years of security updates, but it won’t receive any major Android OS updates. UK availability is yet to be announced.