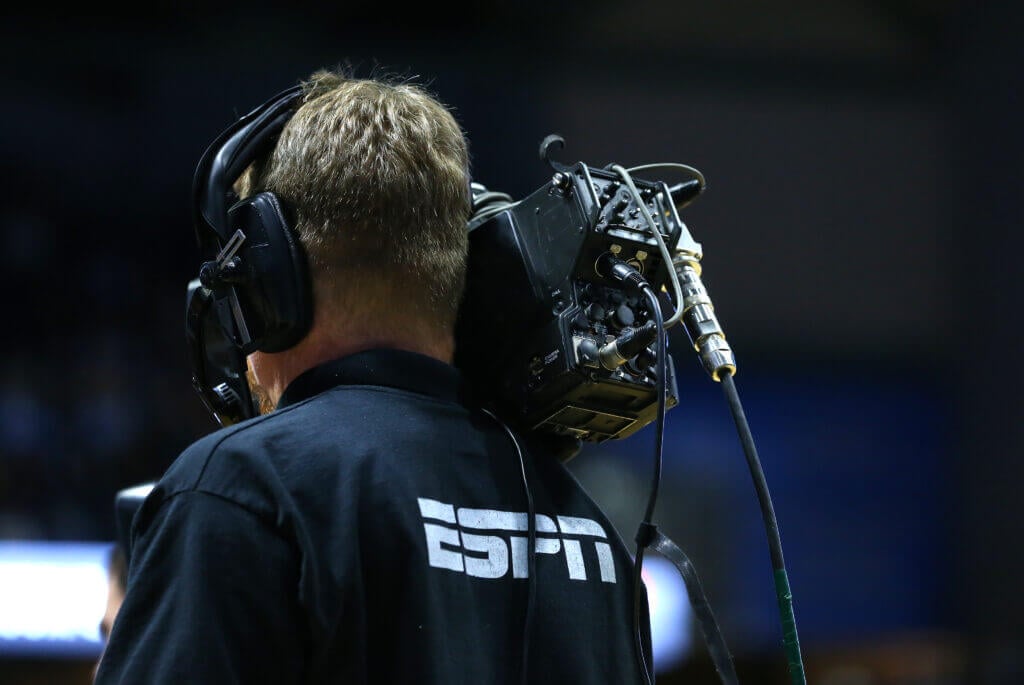 In the middle of a mud-soaked field in nowhere Connecticut, three men with big dreams and no blueprint met to hammer out a deal that would alter the landscape of college athletics. At the time, Michael Tranghese and Bill Duffy, representing the audacious upstart Big East Conference, needed a bullhorn to declare their nascent league’s arrival, and Bill Rasmussen, the proprietor of the equally audacious new 24-hour sports network, needed content. The pairing proved magical, the Big East and ESPN growing up in lockstep, each legitimizing the other.

That Rasmussen put so many of ESPN’s eggs into the college basket(ball) made perfect sense. It not only offered tons of games to fill the airtime. Months earlier the 1979 national title game, featuring Magic Johnson’s Michigan State vs. Larry Bird’s Indiana Statedrew a 24.1 rating, an estimated 35 million tuned in to watch the epic showdown.

It’s impossible to pinpoint a single moment when things pivoted, when college basketball became an afterthought to college football. It’s more like a steady stream of events — the SEC adding Arkansas in 1990, oath Penn State jumping to the Big Ten that same year; the SEC’s first football conference championship game in 1992; the debut of College GameDay on the site in 1993, with Notre Dame vs Florida State; the launch of the BCS Championship game in 1998 — that got people to stop thinking of college football as a regional sport and instead view it as a money-making empire.

“Maybe five years ago, people would say that the valuation between football and everything else was 75-25; now it’s closer to 90-10,” one college administrator says. “Those are the waters we’re swimming in.”

The upstream swimming and how to navigate the choppy waters prompted a conference call on Wednesday morning between Big Ten commissioner Kevin Warren and the league’s head men’s basketball coaches, several sources told The Athletic. Characterized as more curious than contentious, the call gave coaches the chance to ask questions about their concerns about, not just the new TV deal, but the future addition of USC swear UCLA. “There’s just so much uncertainty,” one coach says, “and whenever there’s uncertainty it makes people uncomfortable.” Warren didn’t have many concrete answers — there wasn’t a secret bombshell about expansion, for example — but the worries the Big Ten coaches voiced are no different than the questions plenty of people who care about college basketball are asking.

Life used to be simple: Turn on the TV, adjust the rabbit ears and choose from a handful of channels to find a game. Back in November 1980, as ESPN came into its own, a gobsmacked columnist wrote of the glut of televised basketball games: “when the air is finally let out of the ball at the end of March, ESPN will have carried 130 games, USA 70 , and NBC 14 national telecasts and 10 ECAC games.”

This past season ESPN alone broadcast more than 3,400 games — 2,600 of them on streaming platforms ESPN3, SEC Network+, ACCNX, and ESPN+.

“Streaming is here to stay,” one insider says.

But the real crux of the streaming issue is simple: How much cash are people willing to fork over to watch sports? College basketball is being asked to be the guinea pig to answer that question. There are only so many actual linear broadcast windows available. The sheer size of the hoops inventory demands that some games head to digital. The new Big Ten/Fox deal, for example, stipulates that 47 regular-season men’s games (32 conference and 15 non-conference) will be carried by Peacock compared to just eight football games. (Peacock Premium — which you need to watch live sports — is free with certain cable providers. Otherwise, it’s $4.99 a month.)

That’s not awful. The 14-member schools each played 20 conference games last year, so you’re looking at maybe two league games per school on Peacock. In fact, one league insider insisted none of this is “sky is falling” as some people fear. Last season, ESPN broadcast 30 Big Ten games on one of its networks. Now Fox/FS1 likely picks up many of the Saturday games that were on ESPN, and CBS fills in the rest.

In fact, plenty of people are less worried about this than others, recalling the trepidation people approached ESPN with during the 1980s and the Big Ten Network with in the 2000s. “We all survived,” one insider says. “It’s changed, and I get that. Change is scary. But this is not the sky is falling people think it is.”

There are, though, some legitimate questions. “What happens if we add two, four or six more teams? What does that look like? one coach says. “The number we were given is 20 percent on Peacock, but does that change?” And the secondary question to that is who gets what games? There will be a pecking order, with the networks getting first dibs, but streaming is meant to be a money maker and the way you drive consumers to streaming is to give them something worth watching. “If they put Duke-Carolina on something other than traditional TV, would people pay to watch it? I think they would,” one former conference official says. “But would people pay for NC State-Wake Forest? Probably not.”

Taken in a vacuum, nothing is awful. Most sports fans, however, aren’t watching one sport or one conference. So maybe you get Peacock (and its Premier League package) for free, but what if you also want to watch other college hoops games on ESPN+ ($9.99 per month)? Or you want to watch local NFL games on NFL+($4.99/month) and Thursday night games on Amazon Prime ($8.99/month)? What if you’re also an MLS fan and need Apple TV — or you just want to see Ted Lasso ($4.99/month)? Watching Champions League soccer means a subscription to Paramount Plus ($4.99/month). Or how about you like Big Ten lacrosse and need B1G+ ($14.95/month for the entire conference pass, $9.95/month for an individual school or $39.99 to just get all the lax)? And then, of course, there’s Netflix, HBO Max, Hulu and Disney+.

The simple choice, of course, is to get smart and bundle, and third-party streaming apps (YouTube TV or Sling, for example) can help, but that’s a whole lot easier for the younger demographic than the older. “I get it,” one Big Ten coach says. “You look at the iPad and you think, ‘Wait, why do I have all these apps? What am I doing?’ So for the more casual fan, it will take some time. They’ll wait until there’s a game they really want to see.”

It’s not just fans’ eyeballs, though, that coaches are worried about. “What about recruits?” another coach says. “When they have to start searching for games, what happens?”

Coaches like control of just about everything and anything they can get their hands on. But there are two things they especially cling to: their roster, and their schedule. Combined, those two things, more than any analytics, will determine a team’s (and by extension, a coach’s) fate. Get good players, play good games, make the NCAA Tournament and keep your job. But as leagues continue to inflate their numbers for football, the schedule becomes more and more complicated for basketball.

The Big Ten already plays 20 league games. What happens when USC and UCLA join? It no doubt makes the conference stronger but if those additions require a 24-game (or more) schedule, it’s leaving less and less wiggle room for good non-conference games. The selection committee long has de facto dictated that the rigor of the non-conference slate matters in at-large bid choices. Load up on a bunch of teams ranked in the 200s and 300s and kiss your chances goodbye.

More specifically, coaches pressed Warren about the future of both the Big Ten/ACC Challenge and the Gavitt Games (with the Big East). The former becomes a jumbled mess because of the various TV rights holders, while the latter is tricky to navigate when one soon-to-be 16-team conference attempts to match up with an 11-member league.

Warren did not offer immediate answers on either (a source did tell The Athletic that an extension on the Gavitt Games through 2023 is in negotiation), but he told the coaches that both were being looked at.

“It’s going to be more dictated to you who you play, the illusion of control versus the reality,” a coach says. “And people don’t like that.”

This is the tremor underneath everything. More expansion, in the Big Ten or elsewhere, further complicates the scheduling and the travel, reconfigures the TV linear windows and the share of games headed to streaming. “That’s the hardest part from this meeting,” says a Big Ten coach. “No one knows what the future looks like.” If Warren has any ideas, he wasn’t sharing them on the conference call.

But odds are good that if any leagues are going to add teams, it will be sooner rather than later. The Pac-12, Big 12, Notre Dame and Big East all need to renegotiate deals in the next two years — the Big East, slated to start last, will open its renegotiation window in February 2024 (the Big 12 just jumped the Pac- 12). “This is the ramp-up time,” one administrator says. “You want to get your ducks in a row so when you go to the networks, you’re offering the most appealing package.” Appealing packages no longer center around TV markets. Norman, Okla., doesn’t bring a lot of eyeballs to the SEC, but the Oklahoma Sooners bring a brand. The No. 1 watched college football program resides in Columbus, Ohio; Ohio State‘s appeal has nothing to do with its market. “It’s all about the brand,” one insider says.

There is, of course, only one league in which college basketball will drive the decisions. The Big East has been purposeful and comparatively rational in its expansion decisions. Even when it stretched its footprint by adding Creighton, Xavier and Butler, it opted for like-minded, basketball-centric schools that, combined with DePaul swear Marquette, worked. Not scheduled to meet until November, the league members recently convened a call — not to discuss immediate expansion or any expansion, for that matter — but just so everyone could touch base and discuss the changes swirling around them. The league, several sources say, has no schools in its sights, nor anything near a definitive action plan.

But if we’re talking brands that could give the Big East a chip at the bargaining table, there’s only one to consider: Gonzaga.

Sometimes out-of-the-box happens out of necessity. And sometimes it also works.