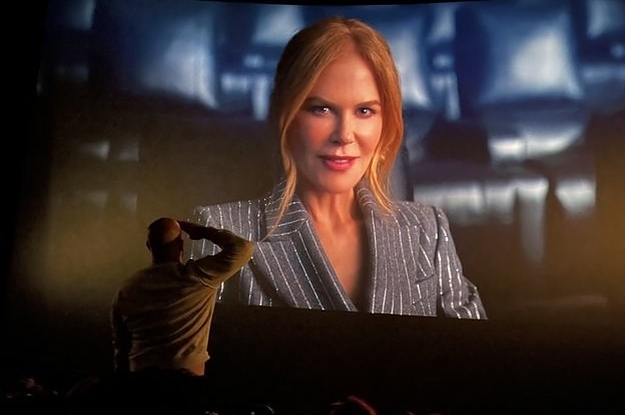 So how did a commercial made with such sincere intentions by a suite of top talent turn into… all this?

Moussa, the Australian who tweeted about the ad the day it was posted online, said he initially found the commercial “baffling.”

“It was a minute of waxing poetic about the power of the movies from a woman whose most high-profile roles for the past five years were in prestige TV. She was all dressed up in this warm yet empty theater. Her accent her was all over the place; some Rs were hard, some were not,” Moussa said. “It was just so unexpected and so inexplicably constructed, but it was built around an actress so of course gay people paid attention.”

Moussa noted that the commercial plays nationally and in wide distribution to a captive audience, helping to drive the ad into people’s collective consciousness. But he said it’s the ad’s “terminally online” fans — many of them gay — who have done the work over the past year to keep the AMC memes flowing across social media.

Ironically, it’s the ad’s seriousness that makes it so silly, believes Gleason, who witnessed the mystery saluting man. “I think it’s Nicole’s earnestness. Everything she says and does is so serious that it almost feels — dare I say — camp?” Gleason said. “And people latched onto it. She wasn’t trying to be funny, but the situation is so dramatic that it is inherently funny.”

An ad shot like an action movie with swelling orchestral music featuring Kidman in a glittering silver pantsuit while spouting schmaltzy lines was destined to become a camp masterpiece, according to Sam Herbstthe creator of The Kidmanifestoa podcast devoted to discussing Kidman’s “films, wigs, and accents.”

“There’s something mysterious and kind of austere about Nicole that I think is part of what makes the ad so fun,” Herbst said. “Like, there’s no real wink in it. It’s a very earnestly performed commercial, if you really think about it. I think it’s very sincere.”

Herbst knew the commercial had achieved iconic camp status when he found himself alone in an empty movie theater and posted an Instagram story that references the heartbreak line. “If you’re a gay person and you follow me, you heart [emoji] reacted, you laughed, but I got multiple people — mostly straight coworkers — DM’ing me, actually worried that I was heartbroken or that I’d broken up with my partner,” Hernst recounted. “They were just mortified by it and I had to explain like, ‘Oh no, this is like a reference from a commercial,’ which is incredibly embarrassing. And that is camp.”

Central to the ad’s viral success is the status of Kidman herself as an internet figure. The actor is decidedly offline, save for an Instagram account that mostly feels curated, but yet she occupies a somewhat unique online position.

If you stop and count, there’s actually a surprisingly large amount of Kidman memes and reaction images that tend to circulate. There’s the one of her clapping awkwardly at the Oscars and the one of her looking shocked at the Oscars. There’s the one from The Stepford Wives (2004) where she can barely contain her pain and the one where she can barely contain her joy upon being officially divorced from Cruise.

Now, with this AMC ad, we have two more: Kidman smirking devilishly as she wanders the theater halls and the actor looking like a deity lit from behind as she marvels in awe at something unseen. (This latter reaction shot joins the ranks of others from Orson Welles and Shia LaBeouf that capture our position as an audience expressing wonder.)

Compared with other A-list women actors, Kidman’s memes mostly aren’t about the roles she’s playing — like, say, the frequent GIFs of Meryl Streep from The Devil Wears Prada (2006) — or because she comes across as a relatable everywoman, like the endless Jennifer Lawrence GIFs that once dominated our timelines. Instead, the Kidman memes tend to hinge on the idea that her public image her is so restrained, detached, and immaculate.

“I think the memes come because it is kind of like these little cracks in the facade of a person that people want to get to know more,” said Herbst, the podcast host.

“I also think that she’s above the internet, right? There’s not a lot of celebrities left that feel like they genuinely exist outside of the internet,” said Emerson Collins, an actor in Los Angeles. “Like, you know they don’t see it, you know they don’t know it, and something about that makes it more fun: that you can tell her this and she would have no idea what you’re talking about.”

“It’s like we’re all passing around a note beneath the goddess, so to speak,” Collins added. (For the record, Kidman appeared to be first informed about the ad’s cult status during an interview with the playlist in January.)