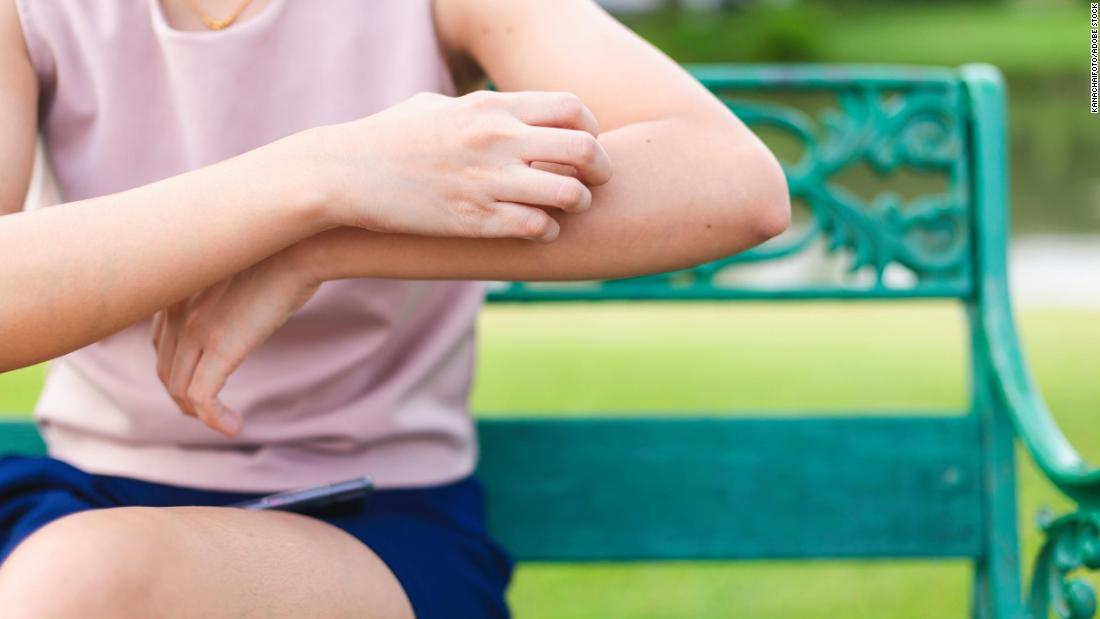 Some people seem to be mosquito magnets — the insects flock to them wherever they are, leaving bites in any exposed flesh — while others are left relatively unscathed and itch free.

How do mosquitoes choose their prey and how can we repel them? We spoke to some experts for their advice.

Leslie Vosshall, vice president and chief scientific officer at the Howard Hughes Medical Institute, explained that a mosquito’s saliva has a quality similar to an anesthetic, so you don’t feel the bite until after the insect flies away. It also has anticoagulants so your blood continues to flow without clotting.

“Mosquitoes’ saliva has lots of proteins in it; some are allergens,” Vosshall said, adding, “Our body recognizes the mosquito protein as foreign, and our immune cells spring into action to try to fight it.”

It’s not the bite that causes the itch — it’s actually the body’s response to the foreign mosquito protein it’s trying to fight. That’s why some people may only have a mild reaction to bites, while others, more sensitive to the foreign protein, react with large areas of swelling that are more painful.

How do mosquitoes choose their prey?

Like most other blood-feeding insects, mosquitoes can smell us from a long distance through the carbon dioxide we exhale, and that’s what makes them come close in the first place, according to Daniel Markowski, technical adviser for the American Mosquito Control Association.

“Once they actually get close to a host, they use a variety of other cues to finally hone in,” he said. “These include visual components like shapes, sizes and colors. That’s why dark colors are not recommended out in prime skeeter habitats because they stand out more, particularly in regards to backgrounds and contrasts.”

Other chemical cues “including breath odors, microbiota byproducts on our skin, or other general human odors like octenol, ammonia, caproic acid or lactic acid” all combine with our carbon dioxide to make us more or less attractive to different mosquito species, he added.

It’s likely a combination of a person’s carbon dioxide and other odors that attracts mosquitoes, said VosshalI, who recently wrote a paper on “The unbreakable attraction of mosquitoes to humans.” But she said the jury’s still out on what exactly makes one person more attractive to a mosquito than another.

“This is something we are working on — the amount and type of body odor that a person gives off is probably the reason,” Vosshall said via email. “There are papers that claim it is blood type, or sweetness in blood, or gender (women are supposedly more attractive to mosquitoes), but nothing is conclusively proven.”

What counters the urge to scratch?

“Don’t scratch” is the advice that most experts and health professionals give. As hard and sometimes unrealistic as it may sound, scratching inflames the skin, and the inflammation makes the skin itch more.

“Scratching can also cause secondary infections and prolong the irritation,” Markowski warned, adding that in extreme cases, people can scar themselves.

Instead, there are dozens of creams and sprays that promise itch relief as well as home remedies and mosquito repellents, so choosing what’s right for you can often come down to trial and error.

“In general, all of the various anti-itch creams are very similar,” Markowski said. “Generally, I suggest that if you’re highly allergic to mosquitoes, you may need a cream with Benadryl or a similar antihistamine.”

Vosshall recommended applying hot water to the bite as soon as possible.

“Very hot water — as hot as you can stand it but not so hot that you burn yourself — short-circuits the itch reflex” she said.

“If you are hiking and that’s not practical, a topical lidocaine local anesthetic gel can be helpful to prevent the feeling of itching as well as an over-the-counter cortisone cream.”

While both experts said that many people prefer natural remedies or herbal products, they urged caution. There is no scientific evidence that these remedies work, and they can come with their own precautions or side effects.

In fact, the best remedy to fight the itch is to prevent a bite in the first place.

“Chemical repellents including DEET now picaridin are safe and highly effective,” Vosshall said. Markowski agreed, describing DEET as the “gold standard,” registered with the Environmental Protection Agency and endorsed by the CDC.

However, he acknowledged some people’s concerns regarding the ingredient’s toxicity, adding, “As with all products, I would suggest treating a small area at first and ensuring you don’t have any allergic reactions. Also, make sure you read the label and follow all use guidelines.”

For a comprehensive guide of insect repellents, the CDC lists EPA-registered options on its website, and the EPA site features a search tool to help you find the right one.

When to seek medical attention

Some people can have serious allergic reactions to mosquitoes, although in practice it is rare, Vosshall said. If you experience severe symptoms such as hives, breathing trouble or anaphylaxisyou should seek medical attention immediately.

You should also see a doctor if you’re planning on traveling to a country where blood-borne pathogens such as the Zika virus and malaria are common. Mosquitoes can spread some diseases from person to person, but a doctor will be able to advise you if there are vaccines or preventive treatments available.