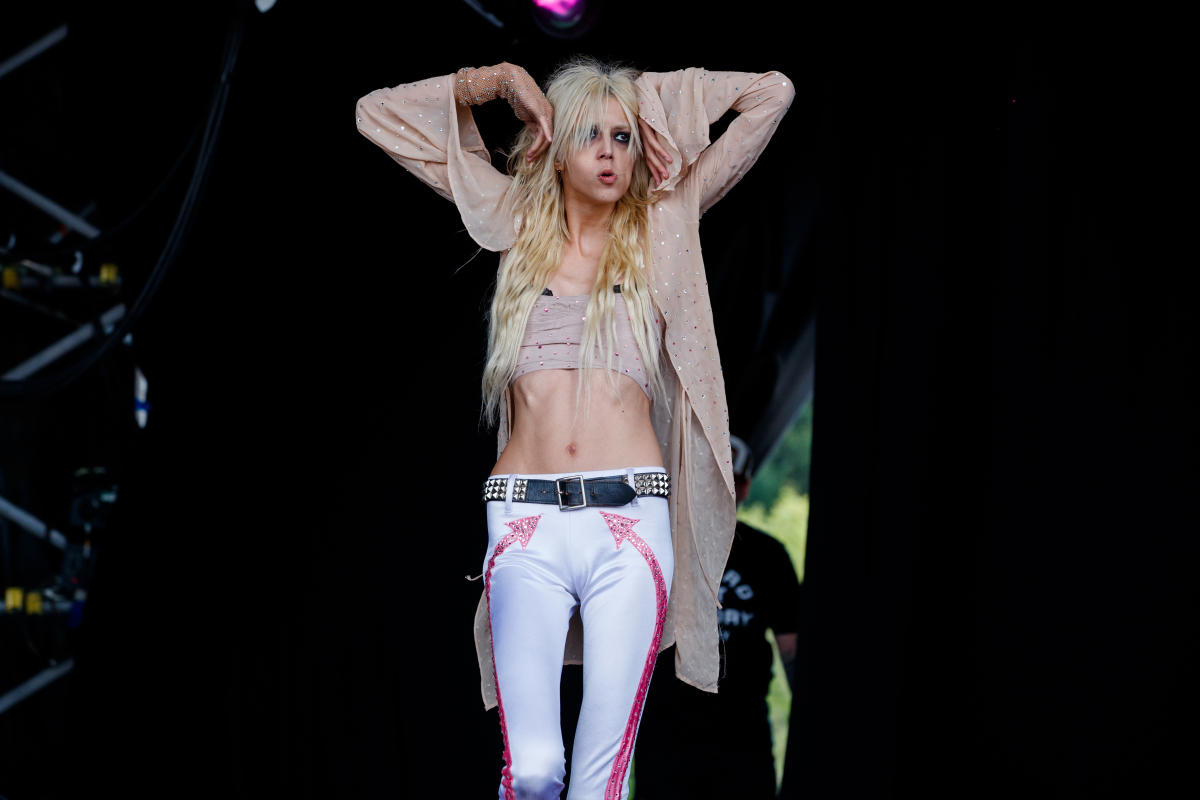 But unfortunately, as Starcrawler’s profile has increased, so has the attention — mostly negative — focused on the 23-year-old de Wilde’s lean, lanky body type. Eventually the online hate grew so intense that de Wilde felt compelled to address her trolls on Instagram.

“I shouldn’t have to write this, and I told myself I was never going to. I’ve had to deal with people making assumptions based on my body since I was a child, but in these past few days it’s been the most I’ve ever experienced,” de Wilde wrote in a caption accompanying a series of childhood photos proving that she has always been unusually tall and thin. “The amount of hate regarding my body on IG & TikTok is ridiculous. I never addressed it in the past, because I honestly didn’t think anyone deserved an explanation. Growing up, my parents and their relatives were just as skinny as me, if not skinnier. Being thin runs in our family, as does being tall. I’m 6’3, I have an extremely fast metabolism, I shit 3 times a day, and I eat more than any of you. There’s literally nothing I could do about it, even if I tried. However, what really bothers me, is if I did have an eating disorder, do you honestly think that telling me to ‘eat a cheeseburger’ or that I’m ‘on the verge of death’ is going to help me? ‘She’s too thin, she needs to eat.’ ‘She’s too big, she needs to stop eating.’ It’s all people disguising their own prejudices as ‘advice’ or ‘genuine concern,’ when in reality it can be harmful and hateful. No woman, no matter what her body type is, needs to be told to change it. If it was your daughter, your sister, or your wife who you thought might be struggling, would you say that to them? And why do we feel like we deserve the rights to other people’s bodies? And why does my body need to come with a PSA?”

“I mean, it’s been happening for so long, and in the back of my head, I’ve always been like someday I’m going to have to say something,” de Wilde explains, speaking with Yahoo Entertainment via Zoom from her LA backyard as she assembles decorations for Starcrawler’s big prom-themed She said record release party at the Troubadour. “But I just always put it off. And I just also never wanted to come off wrong. But then we made a TikTok… and there were, like, hundreds of comments, and they were pretty much all just talking about my body. I’m used to that, but I’m used to having maybe a couple per post. This was an influx, stuff like, ‘I hope you die.’ It was crazy.”

de Wilde stresses that she didn’t make the Instagram post to refute rumors that she is anorexic, as that would be futile. “There are people who literally don’t believe me, and there’s nothing I can do. There are people who really don’t believe that I can be naturally this thin. I don’t know what they want me to do about it! You can literally force-feed me 20 cheeseburgers if you want, but I promise you, I won’t look different tomorrow.” Instead, she posted to protest the online contempt that people who actually suffer from eating disorders have to contend with on a daily basis.

“I don’t have an eating disorder, but it’s so weird that people hate those that do. Like, if I was anorexic or bulimic, do you really think telling me all this terrible shit would help me? Would you really think that would work? People just really hate people who go through that, and it bothers me,” de Wilde gripes. “So, that’s it more of what I wanted to come across in the message — just like, ‘Why the f*** are you so angry?’ I don’t understand people’s brains. I just got depressed, because if I did have an eating disorder, those comments would make it so much worse. … I don’t understand these people who come for me and it’s like, ‘I’m just concerned.’ Like, they say something super-f***ed-up, and then they’re like, ‘Oh, I’m just concerned! I’m not trying to hate! I’m just concerned!” Like, but, you’re note concerned. You don’t know me. Why do you need to be concerned?”

de Wilde never quite fit in as a child, revealing that she was “kind of tormented” in elementary school because she was so different. Starcrawler’s 2019 song “Lizzy” was in fact written about “one specific time that was traumatizing to me as a kid,” when a first grade classmate by that name ambushed her in a school restroom, like a scene from Carrie. “I was peeing in a bathroom stall, and all of a sudden, I heard her come in with her friends, and they’re out for blood,” Arrow recalls. “I was trying to hide my feet and they punched the stall door to see who was in there — and I was pooping too, so I was really embarrassed. And they were looking at me and throwing shit and screaming at me, grabbing my ankle.”

The singer also had trouble fitting in because of her unorthodox upbringing, as the daughter of esteemed rock photographer and video director Autumn de Wilde and veteran drummer Aaron Sperske (Beachwood Sparks, Father John Misty, Ariel Pink, the Pernice Brothers). “We always had different band members staying at our house or just coming by, and I just grew up around it. I thought that was normal,” Arrow shrugs. She says it wasn’t until she was about 10 years old that she realized her parents’ rock ‘n’ roll lifestyle wasn’t the norm. She amusedly recalls one time when she was invited over to a friend’s more conventional, conservative home for dinner.

“We were all eating around a table, which was something I never did because, one, my parents are divorced, and two, we always just ate while watching TV or whatever; it wasn’t like a big ceremony or something. So, I hadn’t experienced that before. And the dad was Irish Catholic and he was like, ‘All right, time to say grace.’ My parents weren’t religious or anything, so I had already started eating, and the dad, like, screamed at me,” Arrow recalls. “Like, his face was turning red. He was salt offended, but I had no idea. I was like, ‘Who’s Grace?’ I remember that was the distinct moment when I was like, ‘Huh, OK. This is normal, I guess.'”

However, Arrow’s unique childhood set her on her rock ‘n’ roll path — “With my parents, the way they showed me music was inspiring. It was always a conversation, it wasn’t forced” — and by middle school she had “kind of found my style. I got into Bikini Kill and started to find out about music like Black Flag and then Ozzy Osbourne and whatever from there. I started getting into cool shit. I hadn’t quite figured it out yet. I was a little bit of like a Tumblr girl, but that did help me find that there were like other not-as-basic bitches out there.” She also realized that “pretty much everyone in rock” were proud misfits like herself. “I think the only one [rock star] that I know of that was considered ‘cool’ in high school was Vince Neil from Mötley Crüe — but that kind of explains a lot,” she chuckles.

It could be argued, ironically, that Arrow was the coolest kid at her high school. By the time she reached her teens, she was embracing her individuality, throwing her own KISS-themed sweet 16 party and even singing in her father’s cover band at Hollywood’s ’70s-inspired hipster bar Good Times at Davey Wayne’s, channeling her heroine Cherie Currie as she belted out “Cherry Bomb” by the Runaways. )”It was a really good way for me to practice performing,” she says.) She also started hitting the LA club scene with an older friend and fellow Runaways superfan named Lily, who “would come to school with Farrah Fawcett hair, super -peroxide bleach, short-shorts, and a silk bomber jacket. I bleached my hair blonde and we would go out to different clubs — it wasn’t hard to talk our way into places.”

Arrow was still in high school when he began conquering the club circuit himself by forming Starcrawler, eventually recruiting fellow rebel Henri Cash by walking up to him on campus with the opening line, “You look cool. Do you play guitar?” She admits that she “wasn’t a good performer yet” and was “very terrified onstage.” And while it took a long time for the band to get a record deal (“For anyone who thinks we’re ‘industry plants,’ trust me, in LA it doesn’t matter. … We sent out demos and literally no one wrote back!”), Arrow’s natural charisma was undeniable from the start. The band soon drew a local buzz because they were so different everything LA band circa 2015.

“The shows I would go to in high school, no offense, but I was just Bored. It was kind of a boring time, and I wanted to put it on a show,” Arrow says. A striking figure onstage, she started performing in Currie corsets and Alice Cooper-esque straitjackets and spitting Gene Simmons-style fake blood; Starcrawler’s early gigs were ferocious, confrontational spectacles reminiscent of the prom scene in the above-mentioned Carrie. “I wanted to do something that would captivate people, and they would at least remember it. Even if they hated it, they wouldn’t be able to forget it,” Arrow explains. “My worst fear is just being forgotten.”

Eventually the unforgettable Arrow and her bandmates secured a deal with Rough Trade and were heralded as rock’s new saviors, with Garbage’s Manson saying, “I feel like Starcrawler and in particular Arrow are really challenging the norms in which women are seen in music.” Arrow reveals that Manson actually helped her develop her onstage confidence. “She was the one who gave me this whole pep talk. She told me, ‘You need to stop being so afraid. I can see that you’re good, but you need to stop being so afraid of the audience.'”

These days, Arrow feels less of a need to rely on Halloween-style theatrics, as Starcrawler’s sound has evolved to incorporate Americana and ’90s indie on their Big Machine debut. “I don’t do the blood anymore. I got bored of it, and it does become campy. You know, I don’t want to turn into a Vegas attraction or something,” she explains. But it seems like Starcrawler’s time has truly arrived amid the recent rock revival, which they arguably helped spearhead. It almost seems as if what they’re doing is even considered — gasp! — normal now.

“When I was in high school — which wasn’t that long ago; I graduated in 2017 — I swear to God, no one was into rock. I feel like it’s almost normal again to listen to rock music. For a while it was kind of just associated with people’s parents’ music, and you know, kids usually don’t want to listen to what their parents listen to,” says Arrow. (An ironic statement, no doubt, given her lineage.) “But I feel like it’s starting to come back in a new, fresher way, where kids can relate to it. And then it makes them appreciate the old.”