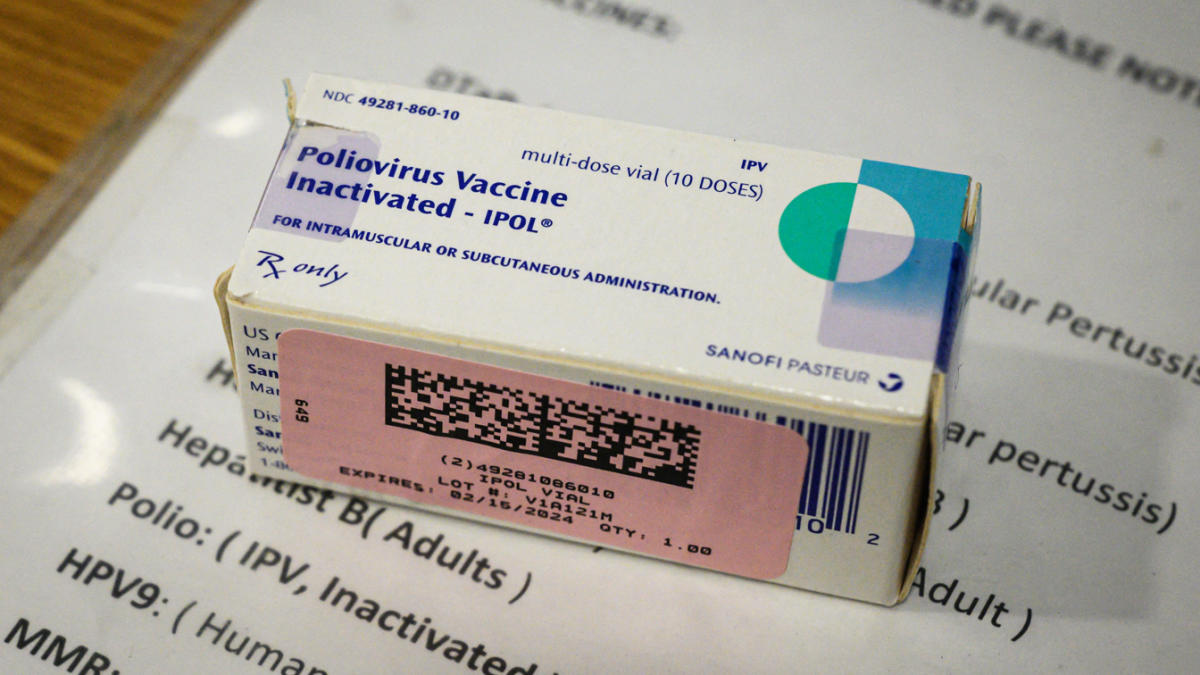 A case of poliovirus — the first detected in the US in nearly a decade — was found in a suburban New York community in July when health officials announced that an unvaccinated man had contracted the disease. He had not traveled overseas during the period of exposure, which suggests he contracted it in this country. Since then, the virus has been found in wastewater samples in the state’s Rockland and Orange counties as well as in New York City.

After a decades-long effort to eliminate polio around the world, the virus has been found through wastewater surveillance in Jerusalem and London as well.

Now authorities in the US are warning parents to get their children vaccinated for the potentially deadly disease, which mainly affects children.

According to the Centers for Disease Control and Prevention, poliomyelitis, commonly known as polio, is an infectious and highly contagious disease that could potentially cause paralysis and lead to death. This disease is “caused by a virus that spreads from person to person invading the brain and spinal cord which can lead to paralysis.” The CDC notes that “1 in 200 infections leads to irreversible paralysis.” There is no cure for polio, but it can be prevented by vaccines.

How many different types of poliovirus exist?

Dr. William Petri, chair of the World Health Organization’s Polio Research Committee and a professor of infectious diseases at the University of Virginia, explained to Yahoo News that “there are three different kinds of wild poliovirus” — types 1, 2 and 3.

“Two out of the three have been eradicated from the world,” Petri told Yahoo News. “There’s just a handful of cases of the last one, called wild poliovirus 1, that began in Pakistan and Afghanistan, and a few cases were introduced in Africa.”

How can someone contract polio?

Experts say the poliovirus is transmitted through contaminated food and water or through direct contact with an infected person. Carriers can pass the virus on for weeks in their stool, and the virus circulates from those who don’t have symptoms, making it easy to infect those around them.

Petri said that in order for someone to contract polio, they’d have to be “exposed to a vaccine-derived poliovirus and revert it to neurovirulent, which is the ability to cause paralysis. You would have had to have someone who wasn’t vaccinated, and those are both unusual occurrences.”

What are polio symptoms?

Experts say that most people who become infected with polio “will not have any visible symptoms” — but, according to the CDC, around 1 in 4 people will suffer flu-like symptoms including sore throat, headache and fatigue. They may also experience muscle or joint weakness, atrophy (muscle wasting) or breathing problems, among others.

Bryon Backenson, an epidemiologist with the New York State Department of Health, explained to Yahoo News, “The amount of poliovirus that’s in the environment, passing back and forth between people, can really increase at a relatively quick rate.”

He said that “the more [polio] that’s out there, the higher likelihood it’s going to come across somebody who’s unvaccinated, and then that individual can eventually wind up getting the neurologic signs of polio-like meningitis or even worse — paralytic polio that will be life-altering, causing paralysis, in many cases, for the rest of your life.”

What vaccines are there to prevent polio?

The oral vaccine is named after Dr. Albert Bruce Sabin, who created it in 1960. Petri explained that the OPV uses live polioviruses and “there’s always a risk of getting a vaccine-derived case of paralysis, and this is the reason why the US, in 1970, we stopped using the Sabin live-virus vaccine because the only cases of paralytic polio we were seeing were due to the vaccine virus turning back to being virulent.”

The IPV, also called the Salk vaccine after Dr. Jonas Salk, who developed it in 1953, is the only polio vaccine that’s been given to children in the US since 2000.

According to the CDC, the “polio vaccine protects children by preparing their bodies to fight the poliovirus. Almost all children (99%) who receive all the recommended doses of vaccine will be protected from polio. Therefore, the strategy to eradicate polio is based on prevention by immunizing every child to stop transmission and ultimately make the world polio-free.”

Do you need to get vaccinated against polio?

If you’re in New York City or another area that has detected poliovirus, experts like Backenson recommend getting vaccinated.

Dr. Fabien Diomande, director of the Polio Eradication Surge Capacity program at the Task Force for Global Health, added, “The challenge is really to make sure that people get vaccinated. No country is protected until we stop the transmission of poliovirus everywhere.”

Is polio here to stay?

Petri told Yahoo News that the globe is on the verge of eradicating wild poliovirus 1, crediting the help of the US government and the World Health Organization, as well as support from the Gates Foundation and the Rotary Club.

To Petri, the case of wild poliovirus 1 in New York is “only a temporary setback.”