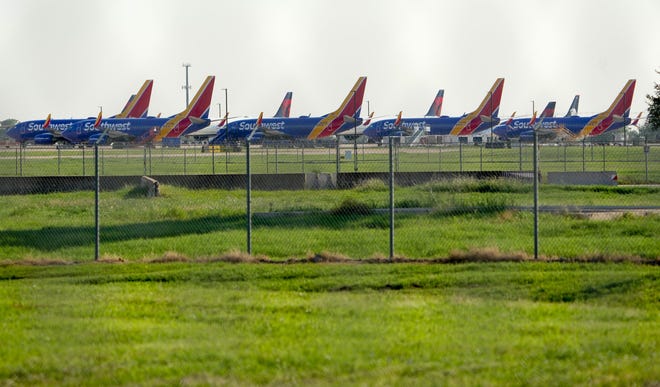 The outage was caused when underground equipment malfunctioned around 4:30 am, according to Austin Energy. Electricians used fault indicators — devices that light up to indicate a circuit issue — to isolate the cause of the problem.

Airport officials said 37 outgoing flights were canceled Wednesday and an additional 59 flights were delayed. More than half the delayed flights were two hours or more behind schedule.

Airport spokesperson Sam Haynes said she could not provide an estimate for how many passengers were affected Wednesday because each airline will tally its own count.

Haynes said airport officials expected operations would be back to normal Thursday, but it recommended passengers check with their airlines before departing for the terminal in case of unexpected delays.

Austin Energy crews were continuing to evaluate the issue to identify any changes the city-owned utility might need to make in the future, utility spokesperson Matthew Mitchell said.

“Any time there’s an outage we try to figure out, is that problem repeatable? And if so, how can we put safeguards and redundancies in place to ensure that that doesn’t happen again,” Mitchell said. “That is standard procedure when you have an outage, but especially for one for one like this, you look at it and say, ‘OK, how can we avoid this in the future?'”

During the power outage, the terminal was run by two backup generators, which Haynes said had to be manually turned on by airport staff because the power failure was on such a large scale.

“The systems (run by the generators) include ingress and egress lighting to help staff and passengers see through the dark; fire detection and alarm; the overhead PA system; and security functions,” she said. “Because this power failure impacted the entire airport campus, the generators had to be manually turned on, which accounts for the time between the lights going out and the auxiliary lights coming back on.”

The power outage also caused significant traffic backups on nearby Texas 71, because as a precaution the airport shut down the roads to the terminal to prevent new passengers from arriving at a building with only the minimal power offered by emergency backup generators.

Roads were reopened about 9:45 am, and the ground stop — which halted all flights starting about 5 am — was lifted around the same time, according to the airport.

During the power outage, passengers who had already cleared security waited in the terminal while those who were waiting in line at a Transportation Security Administration checkpoint remained in line. Restaurants with locations inside the airport, including Salt Lick Barbecue and Taco Deli, handed out free food to passengers who were stuck in the terminal.

Gary Susswein, a former American-Statesman staffer, tweeted from inside the main terminal: “No power at #had this morning. Long lines. Dark, warm terminal. Let’s see how this day goes for travel and for Texas.”

Another traveler, Randy Denzer, who is vice president of the Austin Firefighters Association, had planned to visit his sick mother in Ohio on Wednesday. He decided to wait at the gate he was supposed to fly out of early Wednesday and see if his flight was still listed when the airport’s departure and arrival monitors eventually turned back on.

“This terminal is in complete chaos right now,” he said, describing the morning outage as “eerie.”

“There were thousands of people in the pitch black. You had a couple of battery-powered blue signs and every once in a while folks that worked in the terminal would come through with a flashlight,” he said. “But, other than that, it was just quiet with alarms going off in the distance.”

For Achini Coorey, her husband and their 18-month-old son, the day started early with 4 am arrival at the airport. Their 7:45 am flight to Sri Lanka via Singapore Airlines was cancelled, so the next flight was at 9 am, Coorey said.

“We’re just stuck; we don’t know what to do,” Coorey said.

The family lives in Leander and is trying to visit Sri Lanka, Coorey’s home country, for the first time together. Since the cancellations this morning, the airline refunded half of the family’s fare, but Coorey said she and her husband are still stuck trying to buy an additional ticket due to a clerical error with their first reservation.

“I’m just stressed and can’t really think of anything. We didn’t bring any food, water, we didn’t have anything. We are just tired. All I want to do is go to my country and spend time with my family,” Coorey said “We’ve been here for like three hours with my son, thank God, he was asleep the whole time. … I just want to go and see my parents. I’m going to Sri Lanka after three years, and it’s the first time taking him to my country.”

US Rep. Lloyd Doggett, who has talked over the past six months about improving the passenger experience at the Austin airport, called the disruption to travelers and drivers on nearby roads Wednesday “truly intolerable.”

“With soaring demand, our airport faces many challenges, but the source of this morning’s horrible chaos appears to have been an external power cut,” the Austin Democrat said in a statement. “Following its thorough investigation, Austin Energy must act to ensure a fully functional backup system so that this never reoccurs.”

This is the second major disruption at Austin-Bergstrom in less than a month. The airport was evacuated Aug. 10 after airport officials said a fire alarm went off in the main Barbara Jordan terminal, creating delays for passengers who were forced to wait outside the terminal and faced long lines back through the security checkpoints when the airport reopened.

The alarm was triggered by a water line break outside the building where planes park to load and unload passengers, Haynes said.

After the fire alarm was canceled, passengers reentered the building and were rescreened through security. However, some travelers said they faced long lines and delays getting through the airport because of the evacuation.

Before the alarm incident, the airport has been wrestling with crowding issues this year as well the facility struggles to accommodate growing demand for travel.

Over the Labor Day weekend, Austin-Bergstrom expected between 27,000 and 33,000 passengers to depart each day, airport spokesperson Bailey Grimmett told the Statesman last week. Anything over 27,000 people is considered a busy day. It was not clear how many travelers were in the airport Wednesday.

“We used to say Thursdays, Fridays, Sundays and Mondays are the busiest days, but what we’re seeing is peak travel days are no longer really a circumstance. Every day is a busy day,” Haynes said in the spring.

Impact of the power outage at Austin-Bergstrom International Airport: