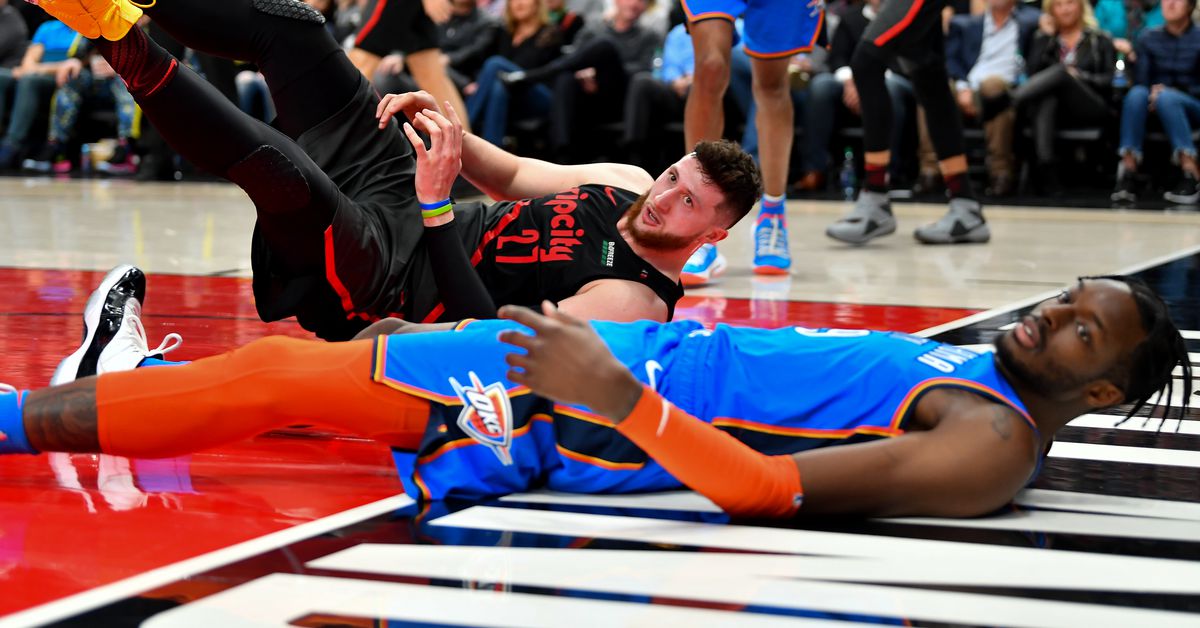 Jerami Grant and Jusuf Nurkic will make up the Portland Trail Blazers starting frontcourt this coming season. The pair have enjoyed varying levels of success and disappointment through their respective careers, which both started on draft night in 2014.

Nurkic was taken with the 16th pick, which was traded from the Chicago Bulls to the Denver Nuggets that night. Grant, the son and nephew of respected NBA names, was selected much later with the 39th pick by the Philadelphia 76ers.

As we know, NBA champion Andrew Wiggins was taken first by the Cleveland Cavaliersbefore being dealt to the Minnesota Timberwolves as part of the deal that united Kevin Love with LeBron James on the latter’s return to Ohio.

Jabari Parker went to the Milwaukee BucksJoel Embiid to the 76ers, Aaron Gordon to the Orland Magic, Australian Dante Exum fifth to the Utah Jazz. Oh, there was also a little-known Serbian named Nikola Jokic who was shockingly taken with the 41st pick by the Nuggets.

Portland’s own first rounder had traveled a bit before it was executed on draft night. He was initially traded to the Charlotte Bobcats as part of the deal that brought Gerald Wallace to the Blazers in 2011. That pick was dealt to the Miami Heat on draft night in 2014 for future Blazer Shabazz Napier — at the time he was LeBron James’ favored pick before departing the South Florida franchise. The Hornets received the 26th pick, PJ Hairston and two second rounders.

Portland’s second round pick was sent to Denver, also back in 2011, in the deal that landed Raymond Felton in Portland. Sorry everyone. It was traded on draft night to the Orlando Magicwhich selected Devyn Marble at pick 56. Consequently, it was a quiet night for Oregon basketball fans with Nurkic not arriving in Portland until 2017 and Grant two and a bit months ago.

Aside from Napier, Rodney Hood, who represented the Blazers between 2019 and 2021 was selected with the 23rd pick by the Utah Jazz. Noah Vonleh was taken with the ninth pick by the Charlotte Hornets before being dealt to Portland in 2015 as part of the Nicolas Batum deal. And with the eighth pick, Nik Stauskas (Sauce Castillo) was secured by the Sacramento Kingseventually spending half a season with the Blazers in 2018-19.

Re-selecting any draft is tricky. There are a number of factors at play. For the purposes if this piece we’re using five criteria. Each player was ranked out of 10 against each with the five scores added together.

Production until this point

Level of importance on their respective roasters

The top two picks were absolute no-brains. Jokic is the reigning two-time MVP and Embiid is one of the most dominant presences we’ve seen in the modern era. From here it becomes a little harder. LaVine and Wiggins come next with the latter earning his high position, based on a recent mind-blowing Finals performance.

Marcus Smart’s stock also rose recently earning him the fifth selection. While his lack of shooting is surely a limitation, he exceeds in most others facets of the game and from all reports he is an important locker room presence in Boston.

Portland’s recent acquisition Jerami Grant goes sixth (jumping 33 spots) and has real potential to rise further depending on how the next nine months play out.

Athletic Nuggets big Aaron Gordon comes next, followed by Hawks center Clint Capela who has benefited from playing alongside two decent pick and role guards during his two stops. Grant’s frontcourt partner Jusuf Nurkic jumps into the lottery at nine. The big fella had the capacity and skill to rise higher but his body and mindframe his have, at times, let him down. I will say that it would have been interesting if he wasn’t initially battling with Jokic for minutes.

The one that might shock some is Randle. Yes, he was an All Star, All NBA Second Team and Most Improved in 2021, but aside from that one unreal season, he’s left a lot to be desired and becomes a real drag on the Knicks’ bottom line.

If these selections are actually made

Does Jokic get traded to the Timberwolves like Wiggins was? Probably. But if the big Serbian shows up early, perhaps the Wolves go for, ah, D’Angelo Russell, instead of Karl-Anthony Towns in 2015. Hey, they might have done their due diligence and selected Devin Booker — we’ll never know . But this is the franchise that picked Jonny Flynn over Steph Curry.

The Bucks get Giannis Antetokounmpo and Embiid in consecutive years. Yikes. Add a half-decent supporting cast and Milwaukee is winning a lot. LaVine goes to Philly, but with their up and down drafting in recent years, who knows where they end up. Wiggins goes to the Magic, you’d have to imagine he performs similarly to the years spent in a Wolves jersey. Smart’s an interesting prospect next to Gordon Hayward and Rudy Gobert, who the Jazz picked up 12 months earlier. Grant goes to Bean Town, arriving before Jaylen Brown and Jayson Tatum. Gordon joins the lowly Lakers experiencing the Kobe Bryant farewell tour and at least stays until LeBron James arrives in 2018.

Poor Capela goes to the Kings and Nurkic ends up in Charlotte who could probably do with him right now. Bogdanovic joins LaVine in Philadelphia setting up an interesting wing rotation. While Harris goes to the Bulls, a clear upgrade on Doug McBuckets.

Eight years on and after not owning a first rounder in the 2014 draft, the Blazers have ended up with two top 10 players manning its frontcourt. Nurkic sees a slight jump in his draft value from 16 but you do wonder how his career his pans out if he’s not left tussling with Jokic for time on the court.

Jokic was obviously the biggest surprise here but Grant also enjoyed a decent rise after being picked out of relative second round obscurity. All vision is 20-20 in hindsight and I’m sure most teams have regrets about their drafting decisions but for the whole league to allow a two-time MVP talent to fall so far, it was clear there wasn’t enough time and money being put into scouting the European leagues.