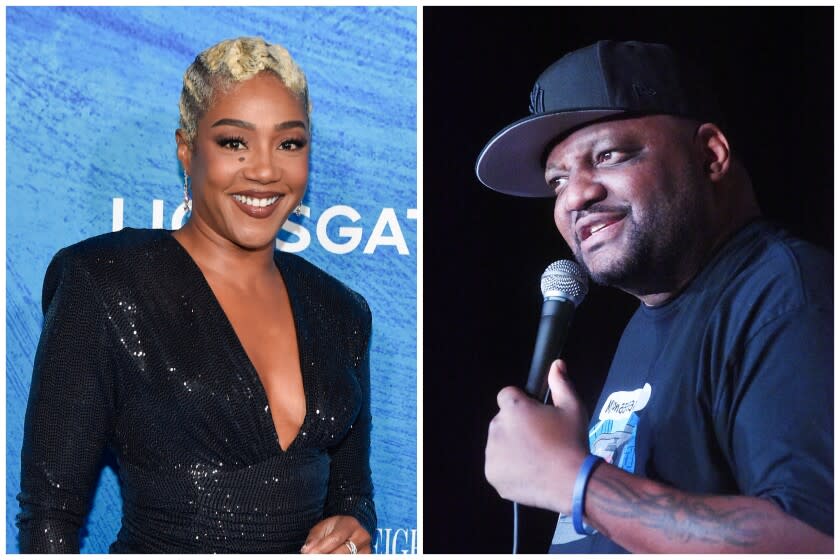 Comedians Tiffany Haddish and Aries Spears are being sued after being accused of child sexual abuse.

According to a lawsuit filed Tuesday in Los Angeles Superior Court, the actors allegedly assaulted a pair of siblings — named John Doe and Jane Doe in the filing — when they were 7 and 14. The Daily Beast first reported on the lawsuit Thursday.

The suit alleges that Haddish (“Girls Trip”) and Spears (“MADtv”) “groomed” and “molested” the plaintiffs, and that some of the incidents were recorded on video. However, Haddish’s attorney, Andrew Brettler, dismissed the accusations.

“Plaintiff’s mother, Trizah Morris, has been trying to assert these bogus claims against Ms. Haddish for several years,” he said in a statement to The Times. “Every attorney who initially took on her case — and there were several — ultimately dropped the matter once it became clear that the claims were meritless and Ms. Haddish would not be shaken down.

“Now, Ms. Morris has her adult daughter representing herself in this lawsuit. The two of them will together face the consequences of pursuing this frivolous action.”

When reached by The Times on Thursday, an attorney for Spears, Debra Opri, responded: “He isn’t going to fall for any shakedown.”

“I don’t trust nobody, I’m scared of adults, I refuse to be recorded or take pictures because I am scared of … adults trying to do nasty stuff to me again,” John Doe told the Daily Beast. “I spend all of my time in my room and don’t go anywhere because I don’t trust anybody.”

As “a longtime family friend” of the siblings’ mother, Haddish regularly visited the plaintiffs’ home, the lawsuit says. The siblings also claim that Haddish took John Doe to Spears’ home, where he was allegedly molested by the comedian.

“The molestation video was uploaded and published to the website ‘Funny or Die’ in 2014 and was not removed from the internet until May 2021,” the filing says. Funny or Die told TMZ on Thursday that it had no part in the video.

“Funny Or Die found this video absolutely disgusting and would never produce such content,” its statement said. “It was uploaded to the site as user-generated content and was removed in 2018 immediately after becoming aware of its existence.”

The 2014 skit involving John Doe was supposed to be a reel intended to help him land a gig at Nickelodeon, the lawsuit says.

In the skit — titled “Through a Pedophiles Eyes,” per the suit — Spears was seen “lusting over the 7-year-old” who was in his underwear while Haddish was not onscreen.

The plaintiffs’ mother reached out to Spears multiple times asking for the footage. Spears allegedly said he was not done editing the video, but claimed that the “footage was unusable” and that he deleted it. Haddish said she did not have a copy.

In the new lawsuit, John Doe and Jane Doe accuse Haddish and Spears of gross negligence, sexual battery, sexual harassment and sexual abuse of a minor. They seek a reward, the amount of which is to be determined at trial, for “past, present, and future general damages.”