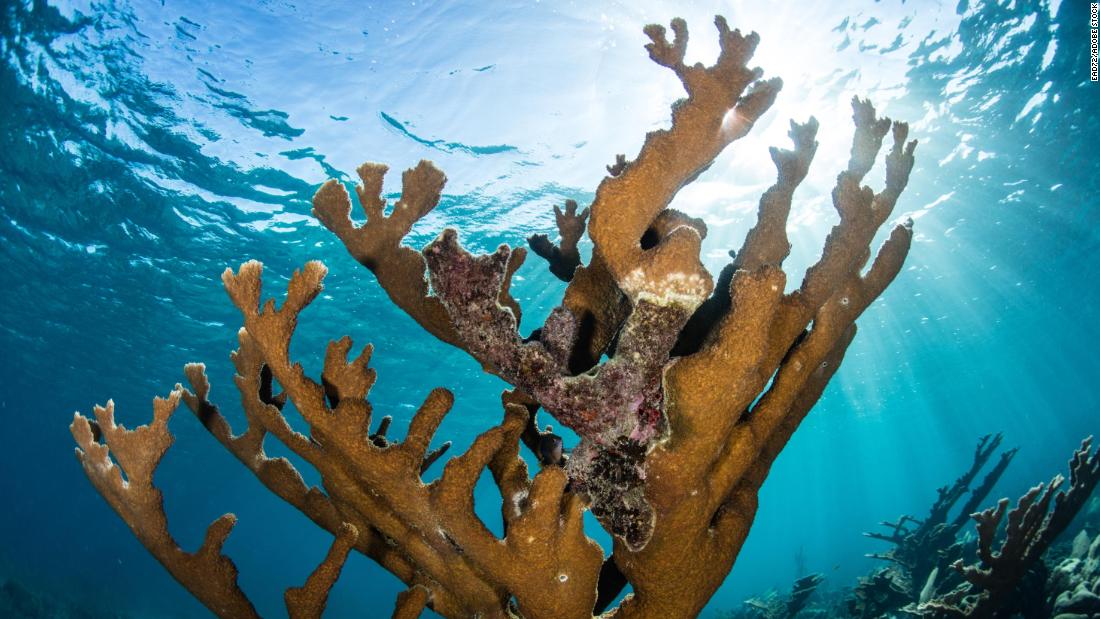 It’s a historic step forward, and one they hope could help revitalize Caribbean ecosystems and could pay humans back by offering extra protection from the fury of hurricanes.

Elkhorn coral once dominated the Caribbean. But, just as other vital coral ecosystems are degrading around the world, elkhorn are now rarely seen alive in the wild. This species — so important because it provides the building blocks for reefs to flourish — has been until now notoriously difficult to grow in aquariums.

Which is why scientists were thrilled when they saw their reproductive experiment was a success.

“When it finally happened, the first sense is just sheer relief.” said Keri O’Neil, the senior scientist that oversees the Tampa aquarium’s spawning lab. “This is a critical step to prevent elkhorn coral from going extinct in the state of Florida.”

O’Neil’s colleagues call her the “coral whisperer” because she has managed to spawn so many varieties of coral. Elkhorn marks the aquarium’s 14th species spawned inside the Apollo Beach lab, but the team ranks it as its most important yet.

O’Neil estimates there are only about 300 elkhorn coral left in the Florida Keys Reef Tract — but the spawning experiment produced thousands of baby coral. She expects up to 100 of them could survive into adulthood.

Named for its resemblance to elk antlers, the coral thrives at the top of reefs, typically growing in water depths of less than 20 feet. This makes their colonies crucial for breaking up large waves. During peak hurricane season, reefs are a silent but powerful ally that protects Florida’s coastlines from storm surges, which are growing larger as sea levels rise.

“As these reefs die, they begin to erode away and we lose that coastal protection as well as all of the habitat that these reefs provide for fish and other species,” O’Neil said. “Now there are so few left, there’s just a few scattered colonies. But we’re really focusing on restoring the elkhorn coral population for coastal protection.”

The Florida Aquarium’s news comes after scientists reported in early August that the Great Barrier Reef was showing the largest extent of coral cover in 36 years. But the outlook for coral around the world is grim — studies have shown that the climate crisis could kill all of Earth’s coral reefs by the end of the century.

Elkhorn coral was listed as federally threatened under the US Endangered Species Act in 2006 after scientists found that disease cut the population by 97% since the 1980s. And ocean warming is its biggest threat. As ocean temperature rises, coral expels the symbiotic algae that lives inside it and produces nutrients. This is the process of coral bleaching, and it typically ends in death for the coral.

“They’re dying around the world,” O’Neil told CNN. “We are at a point now where they may never be the same. You can’t have the ocean running a fever every summer and not expect there to be impacts.”

Elkhorn coral seems to have something analogous to a fertility problem. Its reproduction is sporadic in the wild, making it difficult to sustain a much-needed increase in population. Because of its low reproductive rate, genetic diversity can also be very low, making them more susceptible to disease.

“You could say they’re successfully having sex, but they’re not successfully making babies [in the wild],” O’Neil said. “Terrestrial animals do this all the time. When you have an endangered panda or chimpanzee, the first thing you do is start a breeding program, but coral reproduction is super weird.”

The most challenging part for O’Neil’s team was doing the unprecedented — getting the coral to spawn in a lab. O’Neil said other researchers doubted they could pull it off.

“We faced a lot of criticism from people,” she said. They would say “‘you can’t keep those in an aquarium. You know that’s impossible!'”

They were right. At first.

Elkhorn coral only spawns once a year. In the lab’s 2021 experiment, the environment was strictly controlled to imitate natural conditions. Using LED lights, they accurately mimic sunrise, sunset and moon cycles. But the coral didn’t spawn.

We “realized that the timing of moonrise was off by about three hours,” O’Neil said.

After that frustrating failure, the aquarium’s scientists knew they had a much better shot this year. And, with support from the National Oceanic and Atmospheric Administration Restoration Center and the National Fish and Wildlife Foundation, the Florida Aquarium did in August what was thought impossible by some peers.

The spawning could be a game-changer, according to Thomas Frazer, the dean of the College of Marine Science at the University of South Florida, and it could lead to a future where coral is more resilient to the dramatic changes brought by the climate crisis.

“This type of work really matters,” Frazer told CNN. “Corals selected for restoration might, for example, be more resistant to warmer ocean temperatures and bleaching, exhibit skeletal properties that are able to withstand more intense wave energy, or traits that might make them more resistant to disease or other environmental stressors.”

Margeret W. Miller is a coral ecologist who has focused on restoration research for more than two decades. Miller co-authored a study in 2020 that found the elkhorn reproduction rate in the Upper Florida Keys was so low, it would indicate the species was already “functionally extinct” and could be wiped out in six to 12 years.

“Because this species is an important restoration target, the capacity for spawning under human care opens lots of research opportunities to develop interventions that might make restoration efforts more resilient to climate change and other environmental threats,” Miller told CNN.

Miller said more research needs to be done to make sure lab-spawning elkhorn coral is reasonably safe and effective, to be used in species conservation.

“This sort of captive spawning is not a tool that directly addresses widespread coral restoration at the global scale that would match the scale of the need. Indeed, no current coral restoration efforts meet that scale, and none will truly succeed unless we can take serious action to ensure that coral reef habitats can remain in a viable condition where corals can thrive,” Miller told CNN.

The climate crisis is the ultimate problem that needs to be solved, Miller said. The rapid increase in ocean temperature needs to be addressed, along with threats to water quality. Still, she said, the ability to grow elkhorn in a lab is an important tool in the restoration effort.

“The research on coral propagation and interventions that can be enabled by captive spawning efforts can, however, buy time for us to make such changes effectively before corals disappear from our reefs completely,” Miller said.

Elkhorn branches can grow as much as five inches per year, making it one of the fastest-growing coral species, according to NOAA. And based on observations from the Florida Aquarium scientists, their new elkhorn coral babies will take three to five years to become sexually mature.

Within a year or two, scientists intend to replant these lab-grown corals in the Florida Keys National Marine Sanctuary.

In the race to restore the reefs, scientists agree that this breakthrough is only a first step.

The ultimate goal is a breeding program where scientists could select for genetic diversity and breed more resilient coral capable of withstanding threats like pollution, warming ocean waters and disease.

Then nature can take the wheel.

“There is hope for coral reefs,” O’Neil said. “Don’t give up hope. It’s all not lost. However, we need to make serious changes in our behavior to save this planet.”