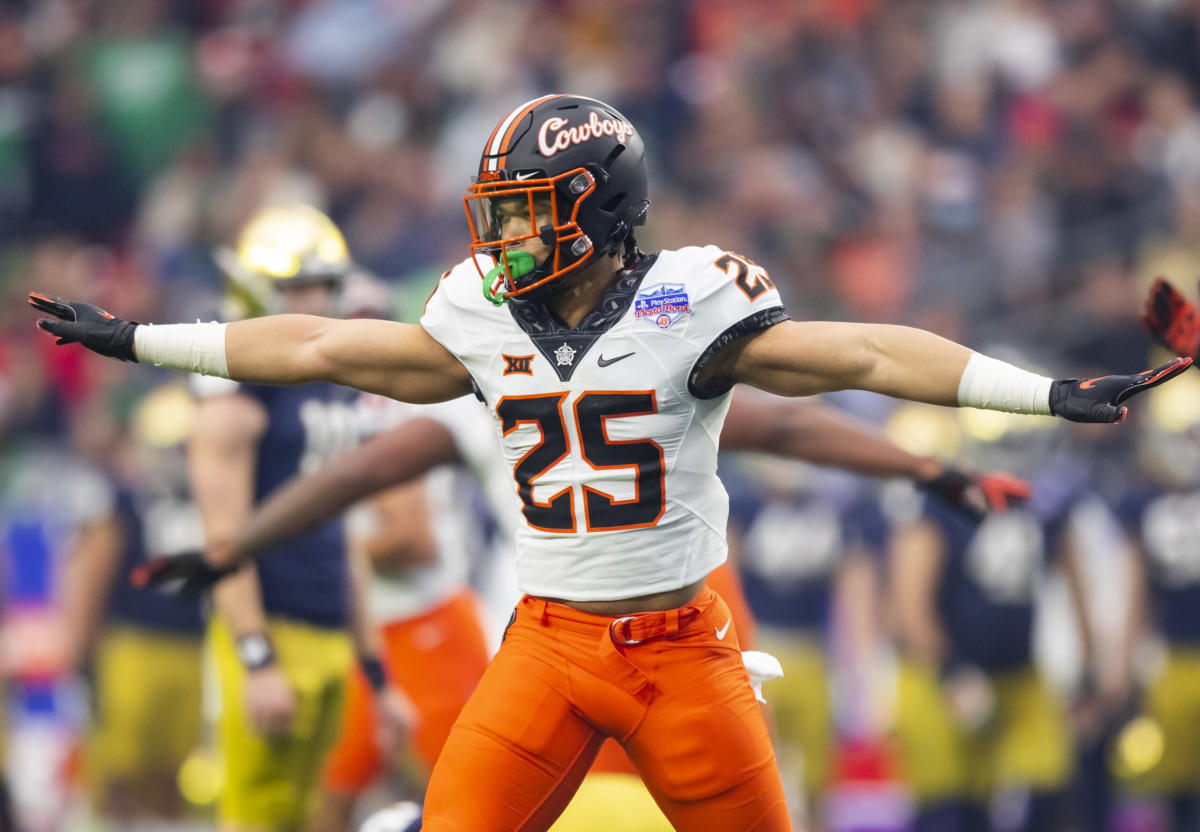 Week 1 of the college football season is upon us. Thursday night’s action consists of some compelling matchups, including West Virginia at Pittsburgh. It also includes Jerry Kill’s return to Minnesota with New Mexico State traveling to the Twin Cities to take on the Golden Gophers.

Thursday night is a nice appetizer to what will be an exciting four straight days of college football. Here are six prospects that Green Bay Packers fans should be watching Thursday evening.

Taylor is a good-sized athlete at 6-foot and 215 pounds. The Oklahoma State safety has a high football IQ and is always in the right spot. He shows adequate ball skills and is a reliable open-field tackler.

“He is a natural playmaker,” said Scott Wright, the Oklahoma State beat writer for The Oklahoman. “He just seems to find a way to be around the ball when a play is needed. He blocked what would have been a game-winning field goal by Boise State last year, had an 85-yard pick-six at Texas that turned the game around, and made a ridiculous one-handed catch on Notre Dame’s onside kick attempt at the end of the Fiesta Bowl. His size and speed are solid. Doesn’t make many mistakes with tackling or coverage. But his knack for being in the right place, then making the play when he gets there, is by far his biggest attribute.”

Warren enters his final year at Pittsburgh with 35 career starts at left tackle under his belt. The 6-5, 325-pound offensive tackle has quick feet to beat edge rushers to the spot. He has strong hands to control the opposition.

“Carter Warren was a player many expected to go to the NFL last year as he was projected to be a Senior Bowl standout,” Christopher Carter, a writer for the Pittsburgh Post-Gazette said. “He chose to come back to Pitt last season when the rest of the starting offensive line said they would as well. He’s a big-time leader for Pitt and is great for a locker room. On the field, he’s learned to use his 6-foot-5 frame to maximize his punches against both speed and power rushers in pass protection. His footwork is pretty sharp and he’s very consistent. If he grows to be a more aggressive run blocker, he’ll be a very interesting player to watch in this year’s Senior Bowl.”

Bethley, a transfer from Hawaii is as versatile as they come. He played all over the field for the Rainbow Warriors last season. According to PFF, Bethley logged 182 snaps on the edge, 500 in the box, 73 at safety, and 266 in the slot. Bethley finished last season with 99 tackles, 8.5 tackles for loss, four sacks, five interceptions, and six pass deflections. He finished his four-year career at Hawaii with 291 tackles, 19.5 tackles for loss, seven sacks, seven interceptions, and 17 pass deflections.

Kalen DeBoer, now with Washington, did a great job of dialing up manufactured touches for Cropper. They used him in a variety of ways and he responded with 85 receptions for 899 yards and 11 touchdowns. He added two rushing touchdowns and one passing touchdown. The name of the game is to get the ball in Cropper’s hands and let him create.

The Fresno State wide receiver has easy speed and is dangerous with the ball in his hands. Since 2019, Cropper has accumulated 969 yards after the catch.

The JUCO transfer finished last season with 73 tackles, one tackle for loss, six interceptions, and five pass deflections. Brown has outstanding range and covers a lot of real estate. He may not be the heavy hitter that his former teammate Jaquan Brisker was, but he’s a reliable run defender that runs the alley.

“Brown’s greatest strength entering the 2022 season is his ability to be around the ball,” Daniel Gallen, the Penn State beat writer for Lions 247 said. “The fact that he tied for the national lead with six interceptions last year grabs the headlines, but he also led Penn State with 61 solo tackles (he finished third on the team with 73 total). Brown typically ended up around the ball, whether it was making a play on his own or cleaning up a breakdown in front of him. As he moves into a more prominent role in a more aggressive defense under Manny Diaz, I expect that playmaking to continue.”

Nubin finished last season with 52 tackles, one sack, and three interceptions. The Golden Gophers player has a good blend of size (6-2, 210-pounds), quickness, and instincts. Nubin is quick to diagnose and drive on routes. He does a good job of using his length to disrupt passes at the catch point.

“Nubin is a rangy safety with excellent length, athleticism, and coverage skills,” said Daniel House, the founder of Gophers Guru. “Tyler’s high football intelligence helps him recognize routes and make adjustments from the backend. Nubin became a more consistent tackler last season and has the versatility to do a variety of different things in Minnesota’s defense. Last year, Nubin settled in, learned new techniques, and adjusted to the pace of Big Ten football. At this point, he hasn’t reached his ceiling yet and I’m expecting an even bigger leap forward from him in 2022. Nubin might have the most overall potential of anyone on that defense.”