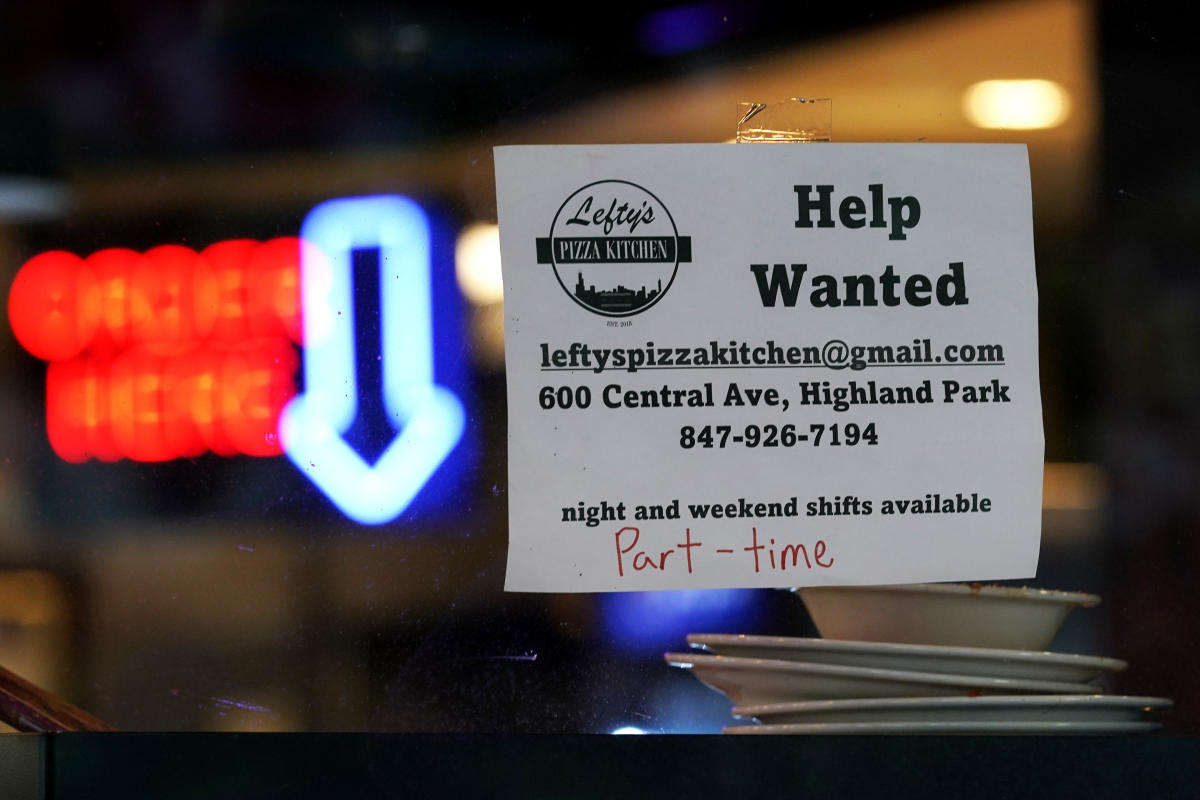 WASHINGTON (AP) — Raging inflation has so scrambled the economy that it’s come to this: If Friday’s jobs report for August were to show a significant hiring slowdown, the Federal Reserve — and even the White House — would likely welcome it.

The government is expected to report that employers added 300,000 jobs last month, according to a survey of economists by the data provider FactSet. That would be down from a blockbuster gain of 528,000 in July and an average of about 440,000 over the past three months. The unemployment rate is expected to remain at 3.5%, FactSet says, matching a half-century low.

A weaker pace of hiring should help moderate wage increases and lift hopes that inflation pressures are starting to ease. That, in turn, would help the Fed make progress towards its goal of conquering high inflation, which is near a four-decade high.

Many companies pass along their higher labor costs to customers through price increases. Conversely, when wages rise more slowly, businesses have less need to raise prices.

Chair Jerome Powell and other Fed officials have increasingly stressed their determination to tame inflation even at the cost of damaging the economy. In a major speech in Jackson Hole, Wyoming last week, Powell underlined the Fed’s tight focus is on curbing inflation and said he was prepared to continue raising short-term interest rates and keep them elevated to achieve that goal. He warned that the Fed’s inflation fight would likely cause pain for Americans in the form of a weaker economy and job losses.

The stock market has fallen every day since that speech as fears that the Fed may cause a recession have escalated.

Powell also said the job market is “clearly out of balance,” with demand for workers “substantially exceeding” the available supply. Indeed, the government reported this week that the number of available jobs rose in July to a near-record high, after three months of declines. There are roughly two open jobs for every unemployed worker, a sign that many companies are still desperate to hire and may keep raising wages to do so.

“I don’t think the Fed is rooting for a poor jobs report, but they are certainly not rooting for a repeat of July,” when hiring accelerated and wage increases were strong, said Gregory Daco, chief economist at Parthenon-EY. “They are going to want to see some moderation.”

The central bank has raised its short-term rate to a range of 2.25% to 2.5% this year, after the fastest series of increases since it began using its short-term rate to influence the economy in the early 1990s. It has projected that its key rate will reach a range of 3.25% to 3.5% by year’s end. Those rate hikes have made borrowing and spending steadily more expensive for individuals and businesses. The housing market, in particular, has been weakened by higher loan rates.

If Friday’s jobs report is another strong one, with substantial hiring and rapid wage growth, the Fed could opt to announce another sizable three-quarter-point hike when it meets later this month, after similar rate increases in June and July.

The jobs figures will also help fill out the economic backdrop as this fall’s congressional elections intensify. Republicans have pointed to high inflation to try to pummel Democrats in midterm campaigns. The Biden administration has pushed back and claimed credit for a robust pace of job growth.

Karine Jean-Pierre, the White House press secretary, told reporters this week that “we’re expecting job numbers to cool off a bit.” The administration has been saying for months that it expects the economy to move to slower but still-steady growth after a swift economic rebound from the pandemic that came with a burst of inflation.

Wages are rising at the fastest pace in decades as employers scramble to fill jobs at a time when fewer Americans are working or seeking work in the aftermath of the pandemic. Average hourly pay jumped 5.2% in July from a year earlier. Still, that was less than the 5.6% year-over-year in March, which was the largest annual increase in 15 years of records outside of the spring of 2020, when the pandemic struck.

Higher wages aren’t necessarily inflationary if they are accompanied by greater efficiencies — if, for example, workers use machines or technology to produce more output. But worker efficiency, or productivity, has tumbled in the past year.

Loretta Mester, president of the Federal Reserve Bank of Cleveland, said Wednesday that “current wage increases are not consistent with inflation returning to our 2% goal” and that she thought with worker productivity so low, wage growth would have to slow to 3.5% or so to reduce inflation.

Yet some skeptics warn that the Fed may be focusing excessively on the strength of the job market when other indicators indicate that the economy is noticeably weakening. Consumer spending, for example, and manufacturing have slowed down. The central bank might raise rates too far as a result, to the point where it causes a deeper recession than might be needed to conquer inflation.

“They run a risk of not realizing how much those rate hikes are restraining economic growth, if they’re just looking at the really strong employment gains,” said Jonathan Pingle, chief US economist at Swiss bank UBS. “You could end up risking over tightening or moving too fast, too soon.”

The economic picture is highly uncertain, with the healthy pace of hiring and low unemployment at odds with the government’s estimate that the economy shrank in the first six months of this year, which is one informal definition of a recession.

Yet a related measure of the economy’s growth, which focuses on incomes, shows that it is still expanding, if at a weak pace.

So far, the Fed’s rate hikes have severely dented the housing market. With the average rate on a thirty-year mortgage reaching 5.66% last week — double the level of a year ago — sales of existing homes have fallen for six straight months.

Consumers have moderated their spending in the face of much higher prices, although they spent more in July even after adjusting for inflation. But companies’ investment in new equipment has slowed, indicating that they have an increasingly cautious outlook on the economy.