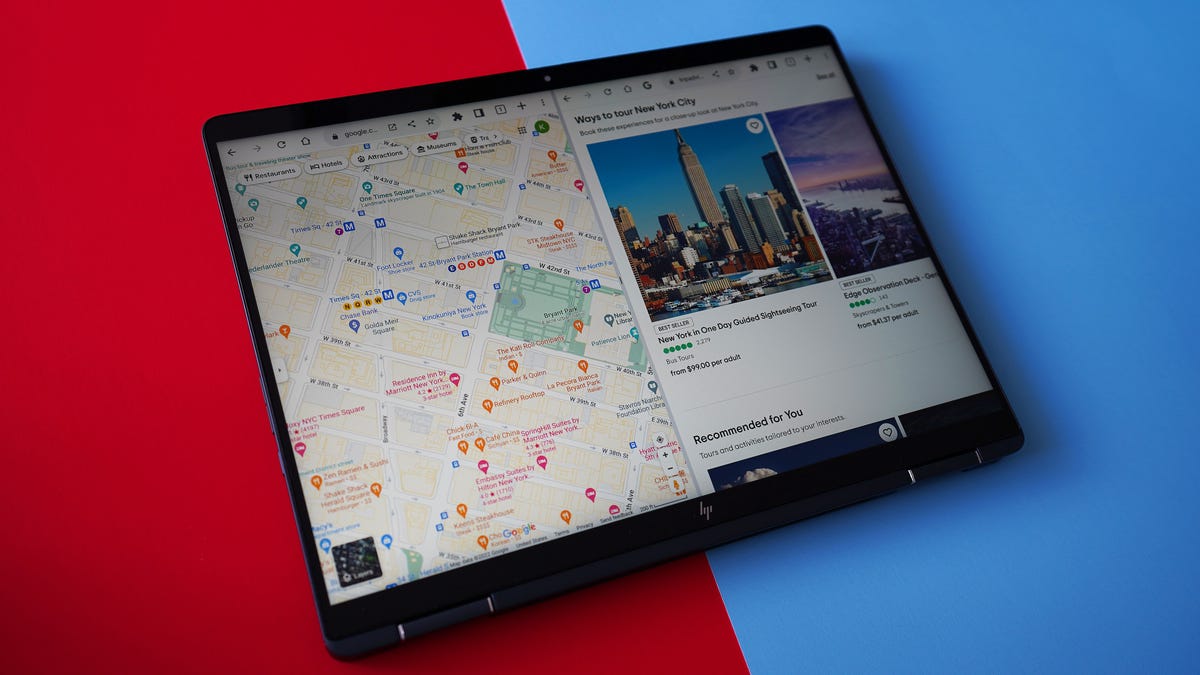 What makes a you good Chromebooks? To me, it should be reliable (from boot-up to tab management), simple in design, and value-driven. All the other perks are mere bonuses.

The HP Elite Dragonfly breaks the mold of low-cost Chromebooks by surrounding the pure software experience with premium hardware.

Enter the HP Elite Dragonfly Chromebook, a 2-in-1 convertible that’s powered by a 12th Generation Intel Core processor and is the first Chromebook to feature a haptic touchpad and Intel’s vPro IT tech. You’re getting all of that, plus a sleek, matte-finish exterior, for a starting price of $1,149. What? Were you expecting it to cost less?

That’s the appeal of the HP Elite Dragonfly Chromebook; It’s a no-compromise, Google-powered laptop that functions as well as it looks. For the price, which competes directly with the latest MacBook Air and bounty of Windows offerings, the Elite Dragonfly is clearly not for the average consumer. Then again, it’s not your average Chromebook.

By design, the HP Elite Dragonfly Chromebook shares similar hardware features with its more expensive siblings (the other Elite Dragonfly models that run Windows instead of ChromeOS). That’s a good thing, because the sturdy, premium craftsmanship of the predecessors is carried over, making the Chromebook variant one of the most luxurious ones I’ve used.

From the matte-frosted exterior to the realism of the haptic touchpad, the Elite Dragonfly is a class above the standard, plasticky Chromebooks. It comes in an elusive, deep-sea color that helps it stand out from competitors that prefer gold and silver treatments.

Both mainstream and enterprise users will find the marriage of sustainably sourced materials and MIL-STD 810H certification a delight. I’ve felt comfortable enough dropping the HP Chromebook in my backpack without a case or a sleeve, and it’s held up just fine. No scratches, dents, or cracks after a month of use.

For over $1,000, the display technology that you’re getting here is as good as it should be. It’s a 13.5-inch, QHD+, IPS panel that produces crisp and lively imagery. To give you an idea, the sharpness of the text made me feel like my eyesight was improving. I like the narrower 3:2 aspect ratio, too, as I usually work with split-screen windows and vertical-scrolling content.

Finally, the base model of the Chromebook caps out at 400 nits of brightness, while upgraded models can ramp up to 1,000. Even with the higher-end option, I found the Elite Dragonfly to be just bright enough to use comfortably outdoors. It certainly doesn’t help that the panel has a glossy texture, making it aggressively reflective in direct sunlight.

More: The 5 best Chromebooks that you can buy

Come for the hardware, stay for the software

At the beginning phase of testing, I wondered if the Elite Dragonfly’s hardware was almost too good for the software. For example, HP bundles the laptop with a bevy of ports and slots, including a dedicated HDMI input to connect to an external monitor and a side-mounting stylus for enhanced precision. That’s on top of the 2-in-1 form factor that allows the laptop to transform into a tented media player or a portable tablet. Let me remind you that this is a Chromebook.

Instead, I’ve come to appreciate the capabilities of the device, especially when transitioning over from a 16-inch MacBook Pro (for work) and a 34-inch monitor-desktop setup (for play). For example, the HP Chromebook, with the 12th-Gen Intel Core i3 processor at its helm, has been plenty capable for multi-window browsing.

I typically don’t have five windows open at once (it can be done, as seen in the image below) but even for what I consider to be my heavier use cases, which involve data transferring, streaming high-definition video, and content -creating on the cloud, the Elite Dragonfly’s “Chrome browser only” approach has been adequate. It’s also easy to take for granted how fast a Chromebook can go from shut down to up and running.

Operating on ChromeOS means that the device presents you with the same benefits and limitations of the HP Elite Dragonfly as present on any other Chromebook. From a benefits perspective, I found the software and update cadence on the laptop the most favorable. About every four weeks, the Chromebook receives an update to add new features (like light and dark themes) and/or improve the overall security of the device. This simplistic, secure rollout of changes keeps the ChromeOS experience refreshing and usable for years and years to come.

And then there are the usual limitations to a Chromebook, like the inability to play and download graphics-intensive games, reliance on an internet connection to get things done, and lack of support for professional-grade services like Adobe Photoshop and Premiere Pro. If any of the three deficits resonates with you, then consider a Windows hrs Mac OS computer instead.

One key area of ​​improvement

For how lightweight and efficient Chromebooks are, battery life should be the least of your concerns. However, I wouldn’t go as far as to say that the HP Elite Dragonfly’s battery is worry-free, because the drainage is certainly noticeable. On average, the laptop would last a good six to seven hours before needing to charge. For casual use, that may be more than enough, but if you plan to make the Chromebook your on-the-go work machine, then some consideration of where and when to charge it is needed.

The HP Elite Dragonfly breaks the mold of low-cost Chromebooks by surrounding the pure software experience with premium hardware. That said, the ideal customer is one whose workflow revolves around the internet (and cloud services), and wants a laptop that can last for years while looking as good as it operates.

My main buying advice for the Elite Dragonfly is this: If possible, go with any of the upgraded configurations. Besides having an improved Intel processor, the higher-end options are equipped with brighter, anti-glare displays and more memory for performance and internal storage.

High-end Chromebooks are a rare breed, but if you’re considering alternatives to the HP Elite Dragonfly, these picks are worth a look.

Samsung made headlines when it debuted its neon-red Galaxy Chromebook in 2020, mainly because of its $1,399 price tag. Fortunately, the successor to the flagship Chromebook is not as expensive but just as capable. The configuration that I recommend picking up has 16GB of RAM and 128GB of storage and comes fitted with a good-looking 13.3-inch display.

Much like the HP Elite Dragonfly’s foldable design, the Acer Chromebook Spin 713 can double as a tented tablet. It has a VertiView 2K touchscreen display that is one of the thinnest on the Chromebook market. Price-wise, you can expect to pay around $600 for the year-old laptop, which makes it a great value pick, especially when put next to the HP.

The Apple MacBook Air (2022) is not a Chromebook, but I can’t keep myself from recommending it if you’re shopping for a laptop in the HP Elite Dragonfly’s price range ($1,200 to $1,700). With Apple’s in-house M2 chip powering the unit, the latest MacBook Air delivers performance gains that keep pace with more-expensive PCs. It’s not as “light as air” as some Chromebooks, but the MacBook is still very portable at 2.7 pounds.