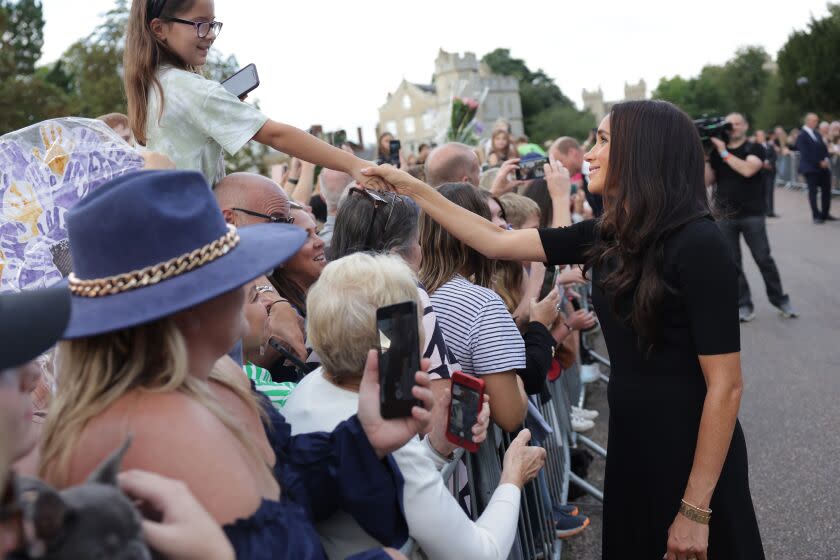 The death of Queen Elizabeth II has brought all kinds of emotions to the fore: grief and sadness over the demise of a stabilizing and comforting presence, respect and awe for her steady hand and sense of duty, and righteous anger over the lasting effects of the British Empire’s often violent subjugation of millions around the world.

And then there is the sideshow of gossipy speculation that accompanies any major news about the royal family: Will Charles be able to earn the love and respect of his subjects, especially after the dastardly way he treated his first wife, Princess Diana?

How will the public react to the presence at various funeral functions the disgraced Prince Andrew, friend of the late Jeffrey Epstein, who settled a lawsuit with a woman who insists he sexually abused her when she was a minor?

Will Princes William and Harry mend their differences? Will rail-thin Kate, the new Princess of Wales, ever eat a cheeseburger?

And, good heavens, why is that so much hate directed at Meghan Markle?

I was especially curious about how the return of Harry and Meghan to the royal fold would be coveredsince their decision in early 2020 to step back from royal duties and decamp to the colonies — well, Montecito — landed with such a thud in the UK

I couldn’t think of a single reason to blame them for leaving. Harry, who arguably lost his mother to the insatiable demands of the tabloid press, understandably decided he could not in good conscience subject his own family to the same pressure.

Spilling their guts — sort of — to Oprah Winfrey in a television special last year was a shrewd move. More than 17 million people tuned in, as the couple spoke frankly about the stresses of living in the public glare, much of it hostile, and lack of emotional support from the palace, especially for Meghan, who described herself as spiraling into a depression reminiscent of Diana’s.

That interview functioned as a sort of declaration of independence for Harry and Meghan, a big hit in the United States that was terribly divisive back home in England. The pair insinuated that the royal family was racist — or, at least, the family member they say speculated during Meghan’s first pregnancy about the skin color of their unborn child.

“What have are they done?” screamed the Daily Mail.

On Saturday, Meghan and Harry joined William and Kate at the gates of Windsor Castle to see the mass of flowers left as a tribute to the queen. It was the first time in more than two years that the couple had been seen in public together.

Apparently, some mourners were not happy to see Meghan. A video of a couple of women deliberately ignoring or looking away from her as she held out her hand circulated widely.

At the same time, the Twitter hashtag #GoHomeMeghanMarkle was trending.

“At the end of the day she is causing a grieving family even more pain,” tweeted a critic. “Anyone with a shred of decency would go home. She is not needed or wanted.”

“We don’t need a self-serving US actress pretending she’s upset about the passing of our Queen,” wrote another.

I doubt very much of the disrespect was spontaneous.

Bot Sentinel, a Twitter analytics firm, has documented a well-organized internet campaign against Meghan. According to New York magazine’s the Cut, Bot Sentinel found that 70% of hateful posts about Meghan originated from just 83 Twitter accounts with an estimated collective potential reach of 17 million users.

It’s not exactly clear who owns the accounts or why Meghan is the victim of so much trolling, but I’d put my money on garden-variety racism.

Something about royal couplings — particularly when an English king or prince marries a divorced American commoner, then flees the country — really inflames our imaginations, doesn’t it?

The tale of King Edward VIII — who abdicated the monarchy to be with Wallis Simpson, whom he famously described as “the woman I love” — shocked a nation, if not the world. To give up a kingdom, and for what? They spent their lives in isolated, hedonistic splendor in Paris, giving parties, wearing gorgeous clothes and not doing much of anything important for the world.

The story of Harry and Meghan is far more inspiring. Here is a modern, fully formed, biracial woman, with a real-life successful career, political opinions and an enviable ease in public settings marrying into a stodgy, white family that has been pulled kicking and screaming into the modern age.

It did not take long for the famously ravenous tabloid press — on both sides of the Atlantic, really — to devolve from deferential to destructive towards Meghan. Coverage in the UK was especially brutal.

Once the honeymoon ended, a new narrative began to take hold: Meghan was selfish, profligate, greedy, demanding and cruel.

In January 2020, less than two years after Harry and Meghan married in a feel-good ceremony beamed to millions around the globe, BuzzFeed published a much-discussed story comparing headlines about Meghan and Kate Middleton, as the Princess of Wales was once known. The hostility towards Meghan was astonishing.

From the Daily News: “Kate tenderly cradles her bump.” “Why can’t Meghan Markle keep her hands off her bump?”

Harry and Meghan are getting the last laugh these days. They reportedly have a rich deal with Netflix, and she just launched a podcast, “Archetypes,” in which she interviews women about their challenges and the stigmas they face.

In an episode called “The Stigma of the Singleton with Mindy Kaling,” Meghan took issue with the theme of comments directed at her after she got engaged.

“Everyone was just like, ‘Oh, my God, you’re so lucky, he chose you.’ … But, thankfully, I have a partner who was countering that narrative for me and going, ‘They’ve got it all wrong. I’m the lucky one because you chose me.'”

Nice to see that despite the relentless attacks on her character, Meghan’s self-esteem is intact. May it drive her critics crazy.