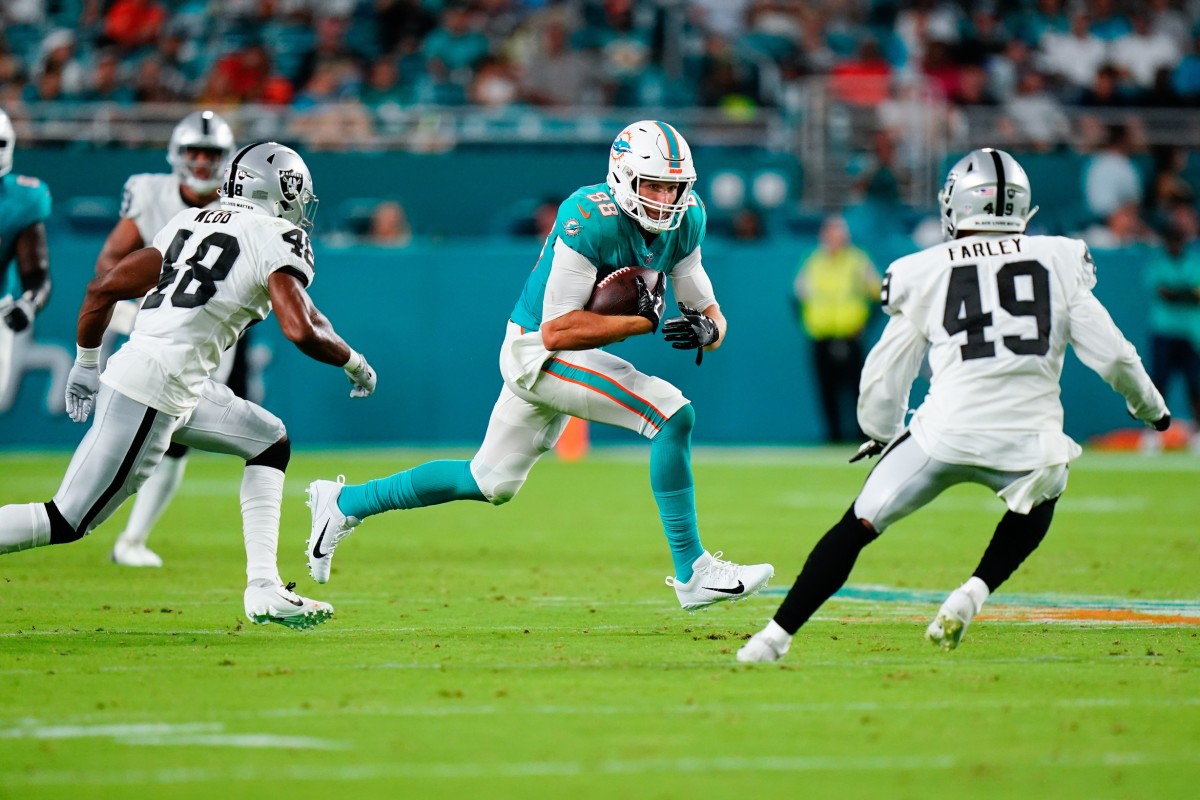 After the Miami Dolphins made their move to get down to the 53-player roster limit, tight end Mike Gesicki remained a member of the team.

And the way GM Chris Grier explained it after practice Tuesday, it was never much in doubt.

Grier cleared the air about the Gesicki situation in the aftermath of a report suggesting his name had come up in trade discussions.

“For us, we did not make any calls on Mike,” Grier said. “We had calls from two teams that reached out to us about Mike. We never made any phone calls about him. We were always — Mike was going to be here. I think everyone made a big deal about him being on the field, but Mike is a competitive kid. He has been challenged to do some things he hadn’t been asked to do before and he stepped up. We were talking about the other day how the last couple of weeks he’s made some great strides in that area. So for us, it was never about moving him or us trying to. Teams called asking because he’s a good player. And so for us, you guys have heard me say it for years, I’ll always listen. It doesn’t mean we’ll do anything. I think it’s negligent if we don’t (answer the phone), because you never know what kind of deal someone’s going to offer you on someone.”

So, as we suggested, the report of Gesicki’s name coming up in trade discussions might have been accurate, but it’s also not the same thing as the Dolphins shopping the tight end.

The Dolphins practice Tuesday was their first with their 53-man roster, as they went inside the Baptist Health Training Complex after making their moves to reach the player limit.

With the Dolphins now in regular season mode, the media now is only allowed to watch the early portion of practice and during that time it looked like WR Jaylen Waddle and TE Tanner Conner weren’t practicing, while the defense was missing CB Nik Needham, CB Keion Crossen, LB Andrew Van Ginkel and S Eric Rowe.

Also with training camp now over, the practice of having one player wearing an orange jersey has stopped.

For those keeping score at home, new linebacker Trey Flowers was wearing number 93.

With the “final” roster cuts to the 53-player limit now done, the next step for the Dolphins and every other team will come Wednesday when teams can claim any player waived and also sign up to 16 players to their practice squad.

With regards to waivers, this applies only to players with less than four accrued seasons and therefore not vested veterans. For those vested veterans who were released Tuesday, they’re free to sign with any team at any time.

Players claimed on waivers by more than one team will be awarded to the team with the highest waiver priority, and that it is based on the 2022 draft order before trades are taken into account. In that order, the Dolphins have the 15th place in the claiming order, meaning that if they claim a player, they cannot have any of the 14 teams ahead of the team also claim him, otherwise they’ll lose.

The waiver claim period ends at noon ET on Wednesday, after which time teams can start assembling their practice squad.

Like Jones, he also was placed on Reserve/PUP, meaning he’ll have to sit out at least the first four regular season games — against the Rams, Titans, Dolphins (at Hard Rock Stadium on Sept. 25) and Ravens.

Elsewhere, Tua Tagovailoa’s cousin, Myron Tagovailoa-Amosa failed to make the Las Vegas Raiders roster as he was among the players they waived.

— CB Javaris Davis was waived by Cincinnati with a failure to disclose physical condition designation.

— G Jamil Douglas was released by the New York Giants.

Finally, guard/tackle Jesse Davis was traded by the Minnesota Vikings to the Pittsburgh Steelers for a 2025 conditional 7th-round pick.